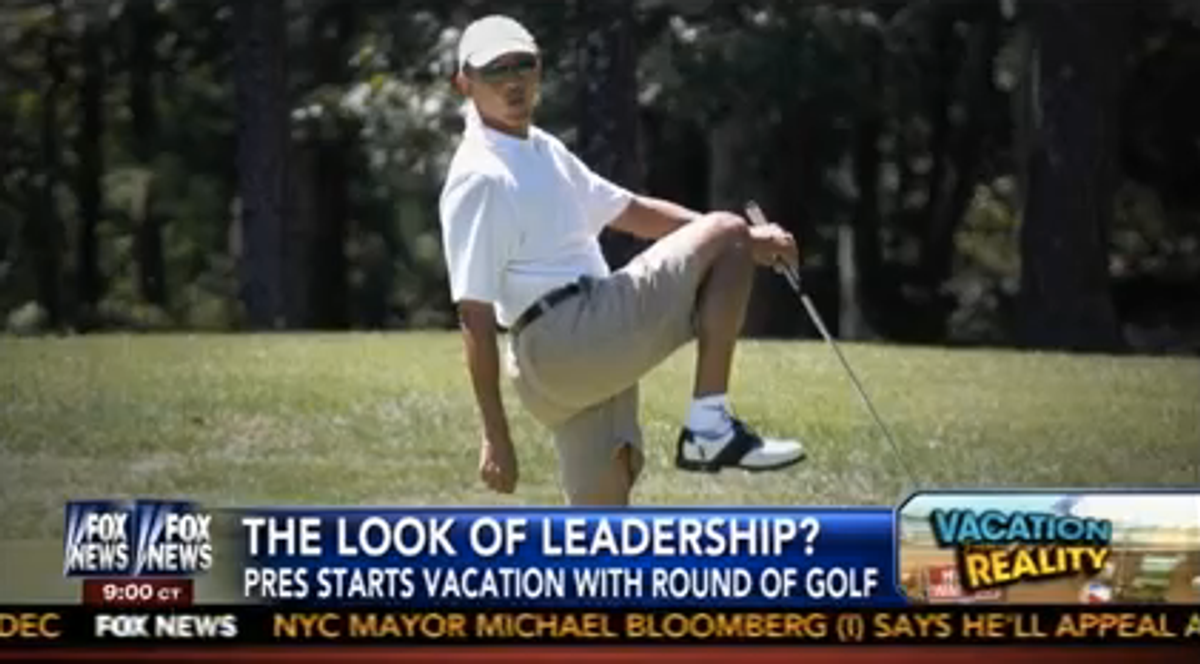 These kind of stories hit many of the erogenous zones of the reactionary Fox viewership -- elitist Obama golfs away the summer on tony (and liberal!) Martha's Vineyard as Americans suffer.

But the latest manifestation of this meme, from Fox News' generally inoffensive Greta Van Susteren, is a bit odder. Last night, the host expressed outrage that the White House "staged" a photograph of Obama ... embarrassingly whiffing a putt on the golf course.

“Why would the president do this for the cameras? It’s one thing to take a vacation but is this pose shoving it down the throats of the American people?” Van Susteren asked indignantly last night, displaying a photo of Obama lifting a knee up in the air while holding a putter.

"What was he thinking?" she continued. "It's all staged and choreographed with Secret Service standing by. This is not spontaneous."

It's odd that a journalist would object to journalists getting any kind of access to a notoriously off-limits president, even if it's not particularly newsworthy kind. But one photo of Obama golfing is better than zero photos of Obama golfing, in terms of the public's awareness of what he did all day.

And Van Susteren seems to think the silly pose Obama strikes in the photo was meant to be flattering or a moment of jaunty victory -- it was "staged," after all. As it turns out, we know exactly what Obama was thinking and, ironically, it's not very flattering. He was wincing after running into some trouble on the green.

Here's the pool report from Kathleen Hennessey of the Los Angeles Times, which we assume Van Susteren and her producers at Fox get as well (emphasis added):

The pool saw Obama, wearing white shirt and khaki shorts, approach his ball and chip it up on the green, overshooting by about 15 feet. His first put was a miss, which Obama reacted to by leaning back and kicking his knee up, as if trying to coax the ball into breaking right. He let out a little, "Ooooh," as it happned. Do see photos.

Next one missed, too. Last one he just dragged in the hole.

Pool could see what looked like a little light banter and ribbing among the group, but could not hear.

Further clues in the caption on the Getty/AFP image she highlighted, which reads: "President Obama reacts to a missed putt on the first green at Farm Neck Golf Club in Oak Bluffs, Mass."

Considering how much time Obama spends on his golf game, shouldn't Van Susteren really be outraged that he hasn't found a better instructor?