Meet the other Koch Brother, William

He used to be known as a political moderate. Not any more 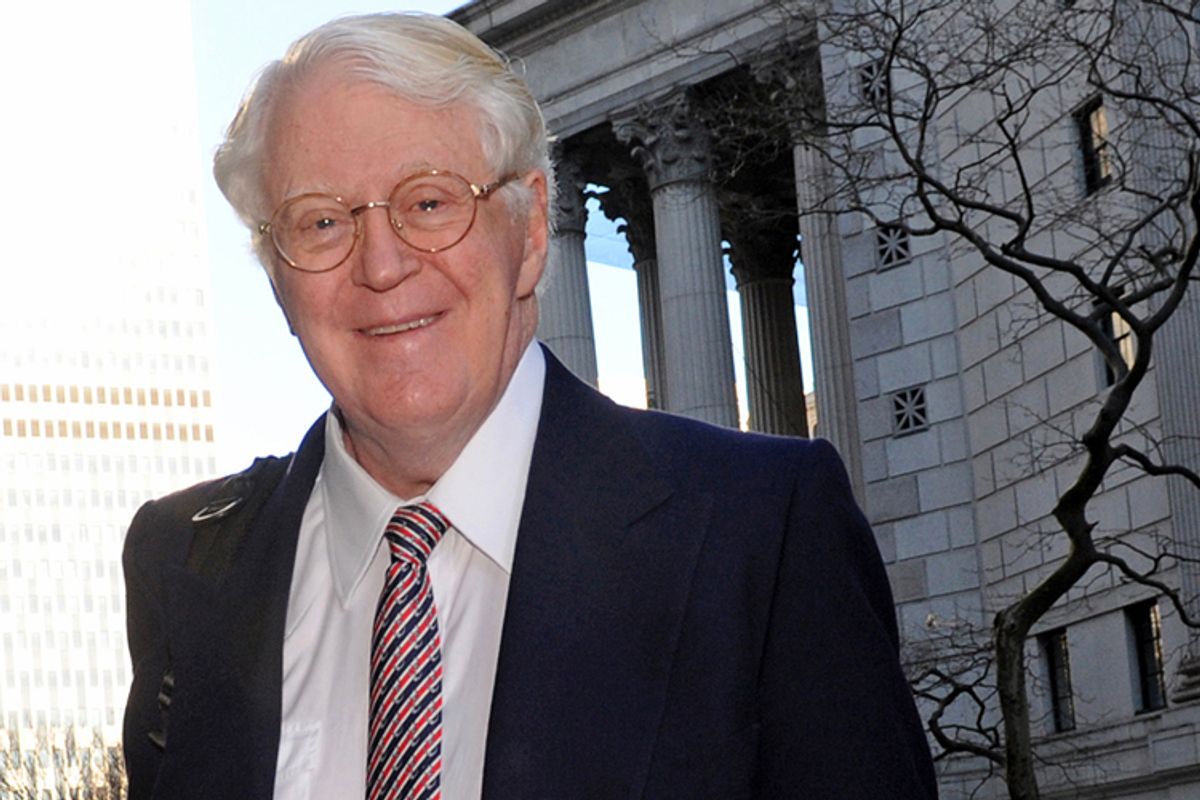 Billionaire businessman William Koch once operated green energy plants on multiple continents and had a reputation for being more politically moderate than his better-known brothers, Charles and David — the principal owners of Koch Industries, Inc.

But William now rejects the “apocalypse of global warming.” He says investing in alternative energy is “foolhardy.” And ahead of the 2012 election, he criticized President Barack Obama for trying to “socialize” the country.

Koch is putting his fortune where his mouth is and is also using his companies’ funds to do so. He has spent millions of dollars to aid politicians he sees as more business-friendly and to fight the Obama administration’s moves to combat climate change, which could mean costly new regulations for Koch’s expansive Oxbow Carbon LLC business network.

Unlike his brothers who have favored politically active nonprofits as their vehicles of choice to back conservative causes, William Koch has poured resources into super PACs, with millions of dollars coming straight from the corporate treasuries of his firms. Meanwhile, donations from his company’s traditional political action committee are at an all-time high — as are Oxbow’s lobbying expenditures.

“Energy companies see a threat to their bottom line and they are taking action,” political analyst Kyle Kondik of the University of Virginia’s Center for Politics told the Center for Public Integrity. “Whatever way they can influence the process, that’s what they’re going to do.”

The decision allowed corporations to use treasury funds to pay for expenditures that call for the election or defeat of a candidates — or give them to intermediaries, like super PACs.

In 2012, Oxbow was at the vanguard, contributing millions to Republican super PACs — more than nearly any other company. Oxbow, along with Huron Carbon LLC, another of Koch’s companies, contributed $4.35 million to GOP super PACs, according to a Center for Public Integrity analysis of federal records.

(Click to see our visualization of political giving by Koch and his companies going back to 1989.)

Through Oxbow spokesman Brad Goldstein, Koch declined an interview for this story. But earlier this year, Koch told Massachusetts-based CommonWealth magazine that “a lot of our business is influenced regularly by government, too damn much by government. And so we have to play in that game.”

In 2011, Goldstein told The Village Voice that the Obama administration “has made it extremely difficult for businesses to operate.” Koch himself used even stronger language in a 2012 interview with the Cape Cod Times. “I think Obama's trying to socialize this country,” he said.

Koch also argued to CommonWealth that the renewable energy industry is only profitable when big government gets involved: “The alternative energy business is uneconomical unless you get a government subsidy or a government-enforced contract,” he said.

Oxbow Carbon LLC, which is described in government records as the “holding company for all Oxbow business,” has interests in natural gas, coal, petroleum coke and sulfur, among other natural resources. (Petroleum coke is a byproduct of oil refining, which is used to manufacture steel and aluminum, and Oxbow is one of the leading companies in the industry.)

Its corporate headquarters are in Palm Beach, Fla., but its operations span the globe. Including its subsidiaries and related companies, Oxbow’s annual sales exceed $4 billion, and it employs more than 1,000 workers worldwide.

A related company, Oxbow Mining LLC, owns and operates the Elk Creek coal mine in Colorado. And another Koch company, Oxbow Carbon and Minerals LLC, has sold significant amounts of coal over the years to both the U.S. Department of Defense and Tennessee Valley Authority.

This relationship prompted controversy when Koch’s companies began giving millions of dollars to GOP super PACs, as federal contractors are prohibited from making such donations.

When the Los Angeles Times raised questions about the contribution ban faced by federal contractors, Goldstein, the Oxbow spokesman, maintained that Koch’s companies were on the right side of the law.

"I can say without equivocation that Oxbow Carbon LLC is not a federal contractor," Goldstein wrote in an email to the Times.

Billy the Kid and Katy Perry

Koch, who is the 92nd-richest person in the United States according to Forbes, is Oxbow Carbon LLC’s founder, president and chief executive officer. While he may not have the same prolife in political circles as his brothers — who are tied for fourth among the richest Americans according to Forbes — he’s arguably more colorful.

Sign up now to receive our Money in Politics newsletter.

The 73-year-old chemical engineer earned a doctoral degree from the Massachusetts Institute of Technology. He is an avid collector of art, fine wine and Western memorabilia. He once paid $2.3 million at an auction for the only verified photograph of frontier outlaw Billy the Kid.

In 1992, Koch won the America’s Cup, the highest honor in sailing, and he has been awarded the title of honorary admiral in the state navies of Kansas, Nebraska and Alabama. Last year, for his wife’s 50th birthday party, he hired pop star Katy Perry to perform for a private party at their Palm Beach house.

Additionally, Koch has moved a ghost town he purchased to property he owns outside of Aspen, Colo. For years, he has been pushing for a land exchange with the federal government that would secure even more privacy for the family and guests he plans to entertain there. He recently founded a college preparatory school called the Oxbridge Academy of the Palm Beaches. And he has spent millions of dollars opposing a wind farm project off the shore of Massachusetts’ Cape Cod, where he also has a home.

In 1980, Koch narrowly failed in a bid to win control of the family oil business, which had been established by his father in Kansas in the 1920s. A few years later, he sold his stake and started his own energy corporation. But he later charged that he had been underpaid and brought a series of lawsuits against Koch Industries and his two brothers, beginning in 1984.

Fortune called the struggle “perhaps the nastiest family feud in American business history.” The last court case was settled in 2001, but in a 2012 interview with Forbes, Charles Koch still declined to refer to William by name.

That year, Forbes ranked Koch Industries the second-largest privately held company in the U.S., while William Koch’s Oxbow ranked 96th, as it pumped millions into the nascent GOP super PACs.

Ahead of the 2012 election, Koch, himself, personally donated $400,000 split between three Republican-aligned super PACs, including $250,000 to the pro-Romney Restore Our Future.

But Koch hasn’t always been so enthralled with the GOP. For years, he backed Democrats as often as Republicans.

Not including his recent super PAC donations, Koch has contributed more than $1 million to federal candidates, parties and political action committees since the 1990 election cycle, according to a Center for Public Integrity review of data maintained by the Center for Responsive Politics.

Of that sum, nearly two-thirds went to Democrats, including $400,000 to the Democratic Party of Kansas during the tail end of Bill Clinton’s presidency when “soft money” donations of unlimited size to parties were legal.

Oxbow Carbon LLC maintains an office in downtown Washington, D.C., in a building along Pennsylvania Avenue about halfway between the U.S. Capitol and the White House. From there, Karen Knutson — who served as the deputy director of Vice President Dick Cheney’s secretive energy task force during the Bush administration — leads its lobbying operation.

Knutson, who did not respond to messages seeking comment for this story, is also a former chief of staff for Sen. Lisa Murkowski, R-Alaska — the ranking Republican member of the Senate Energy and Natural Resources Committee.

Two other lobbyists who have passed through the revolving door between government and industry appear in Oxbow’s most recent filings: Caroline Martin Szeremeta, who once was a legislative aide to former Sen. Byron Dorgan, D-N.D.; and Kathleen O’Connor, who served in the White House’s office of legislative affairs under President George W. Bush and whose Capitol Hill work experience included a stint as an aide to former Republican Speaker of the House Dennis Hastert.

In addition to its in-house lobbyists, Oxbow retains the lobbying services of Heather Podesta & Partners, including the firm’s namesake, Heather Podesta, one of D.C.’s most recognizable lobbyists.

During the first half of 2013 alone, Oxbow spent $620,000 lobbying Congress and the Department of Interior on a range of business concerns. Among them: Koch’s desired land swap in the Rocky Mountains of Colorado, as well as proposals related to greenhouse gas regulations, coal leasing on federal lands, fracking and tax reform proposals affecting the energy industry, according to federal records.

While Koch’s companies were at the forefront of super PAC activity following the Supreme Court’sCitizens United ruling, they only recently began giving money through traditional political action committees. Traditional PACs, unlike super PACs, are limited in what they can raise, but they may donate directly to candidates’ campaigns.

Oxbow Carbon LLC itself does not sponsor a political action committee, but Koch’s Oxbow Carbon and Minerals LLC does, having established a corporate PAC in 2007. Since then, it has been extremely active.

Like Koch himself, not only did Oxbow Carbon and Minerals’ PAC donate more lavishly leading up to the 2012 election, it was also more partisan with its giving.

Prior to the 2008 election, roughly half of the PAC’s contributions aided Democrats, including the legal maximum of $4,600 to U.S. Sen. Mark Udall of Colorado. But ahead of the election last November, for every $1 the Oxbow Carbon and Minerals PAC gave to Democrats, it gave about $4.50 to Republicans.

All four GOP members of the Colorado delegation in the House also are also among the PAC’s beneficiaries, as is incumbent Sen. Michael Bennet, D-Colo.

When asked about the PAC contributions, Goldstein, the Oxbow spokesman, said he was “glad” that the PAC’s footprint had been “growing.”

The Obama administration’s willingness to tackle climate change has also been growing.

“I’m here to say we need to act,” Obama said during a June speech at Georgetown University, when he announced a new “national climate action plan.”

“We don’t have time for a meeting of the Flat Earth Society,” Obama continued. “Sticking your head in the sand might make you feel safer, but it’s not going to protect you from the coming storm.”

The president has tasked the Environmental Protection Agency with completing new carbon pollution standards for both new and existing power plants. And because of this role, it’s become a lightning rod for critics who see the Obama administration as waging a “war on energy” and a “war on coal.”

For their part, House Republicans have pushed legislation to restrict the EPA’s ability to enact regulations they view as harming the economy. And Senate Republicans only recently dropped their objections to Obama’s new pick to head the agency, Gina McCarthy, who was nominated in March but didn’t get a confirmation vote until July 18. Just six GOP senators voted to support her.

Oxbow spokesman Goldstein declined to speculate on the company’s future political giving other than to say it will continue backing candidates that support free enterprise.

“We’re all about business,” he said.