The Sochi scandal is just beginning 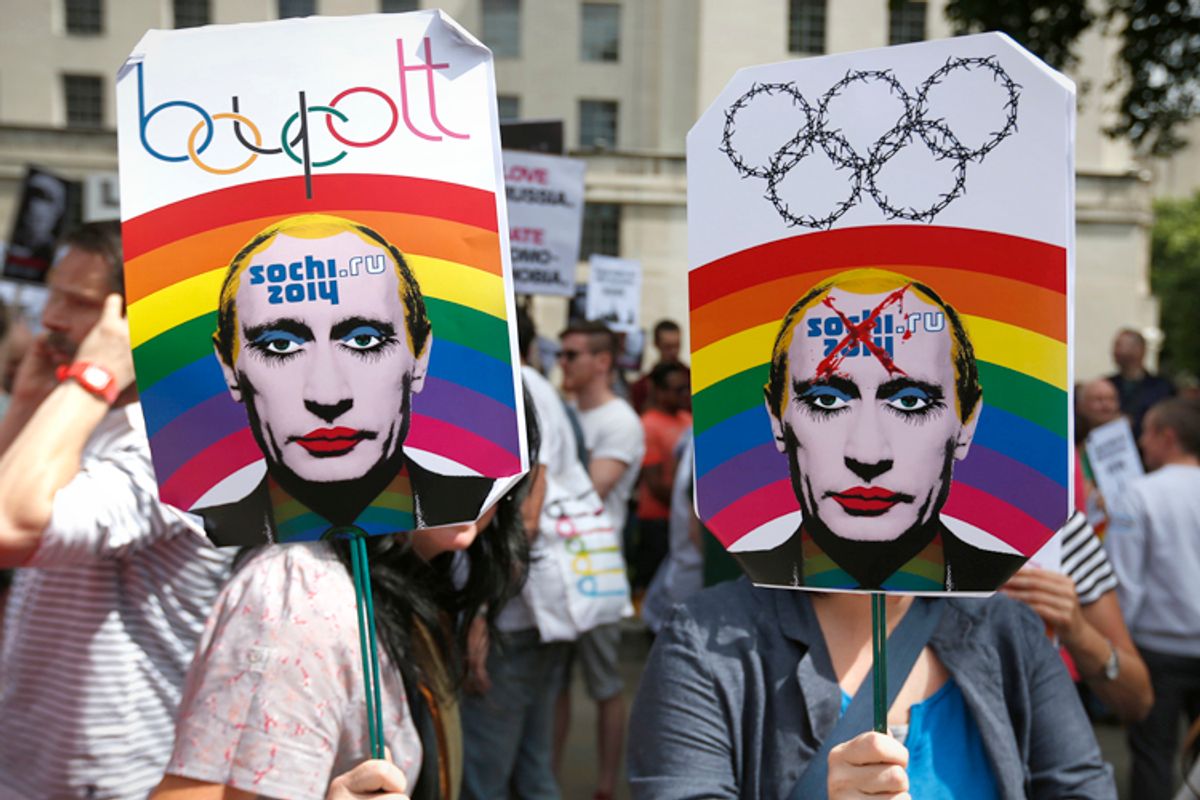 Despite the media firestorm, it's highly unlikely that a proposed boycott of the 2014 Olympic games in Sochi will happen. President Obama has come out against it, as has British PM David Cameron. And in an impassioned post, openly gay four-time gold medalist Greg Louganis makes a compelling case that boycotts only end up harming the athletes who have trained so hard to participate rather than the host countries.

It's equally unlikely that the games will be moved to a more LGBT-friendly location such as Vancouver, as first proposed by George Takei of “Star Trek” fame. Given the amount of time and preparation needed to host the games — and the fact that Russia has already spent $50 billion, making it the most expensive games in history — it's far more likely that Russia will take the necessary steps to assure the International Olympic Committee that they do not intend on persecuting LGBT athletes at the games, or arrest someone for wearing a gay pride pin, etc. But even if Russia does back off a little, the issue is unlikely to go away.

Already the cracks in their resolve are becoming evident. In a press release printed on the Russian Embassy to the U.K.'s website, a host of FAQ answers state that “LGBT rights of Russian citizens and foreigners are protected by the Constitution and laws of the Russian Federation” and “The Russian legislation prohibits only LGBT propaganda among children,” ending with the less-than-reassuring claim that “the information of a 'wide-scale violence campaign' against LGBT activists after the adoption of the mentioned law is simply not true.”

And yet, this wasn't necessarily the case even last week, when Russian Sports Minister Vitaly Mutko told R-Sport that Russia’s anti-LGBT propaganda law would remain in effect during the Sochi Olympics in February 2014. “No one is forbidding an athlete with non-traditional sexual orientation from coming to Sochi, but if he goes onto the street and starts propagandizing it, then of course he will be held accountable,” Mutko said.

The IOC, which previously announced that it had received assurances “from the highest level of government in Russia that the legislation will not affect those attending or taking part in the Games,” seems to finally be caving to public pressure to take the matter more seriously. On Friday, President Jacques Rogge said the IOC was seeking more clarification because certain elements of the law remained murky.

"We are not clear about the English translation of the Russian law and we want clarification of this translation to be able to understand what has been communicated to us," he said. "This is about a couple of paragraphs -- we don't understand all the details because of probably a difficulty in translation ... We are waiting for this clarification before having final judgment on these reassurances."

Of course, the law signed by Putin in June is unclear — purposefully so. Article 6.21 of the Code of the Russian Federation on Administrative Offenses, which passed the Russian Duma in a unanimous 436-0 vote, allows the government to fine individuals accused of spreading “propaganda of nontraditional sexual relations amongst minors.” The federal ban follows many similar regional laws, which have passed in St. Petersburg and other cities since 2006. Individuals and organizations found in violation of the law can be fined anywhere from 4,000 to 1,000,000 rubles ($120-$30,000), while foreigners can be detained up to 15 days and face deportation from Russia.

What this “propaganda” entails is left vague. And coming on the heels of a 100-year ban on pride parades in Moscow, as well as a ban on adoptions not only by gay foreign couples but by any couples living in countries where same-sex marriage is legal, it's not much of a stretch to think, as Harvey Fierstein recently declared in an Op-Ed for the New York Times, that Russia has “declared war on homosexuals.”

But why? And why now, especially with the rest of the world moving in the opposite direction?

Putin's re-ascendance to the presidency was marked by an appeal to Russian exceptionalism, one that has a long strain in Russian history. Much as Karl Rove did for Bush's reelection in 2004, Putin has sought to create “wedge issues” between the conservative, religious, “Russia first” majority and the more liberal, Western-leaning minority. Particularly now, with oil prices around the world relatively low, the Russian economy seems particularly vulnerable, and Putin, facing sliding approval ratings, likely felt the need to bolster his popularity. Gay rights were an easy target in a country where polls show the majority find homosexuality morally unacceptable.

In a sense, then, all the talk of a boycott might only strengthen Putin's standing in the near term, as it is one more sign -- like the alliance with Syria and support of Edward Snowden -- that Russia is defying the West and asserting its independence. As Sports Minister Mutko put it, "Russia must understand that the stronger we are, the more other people aren't going to like it. We have a unique country."

But as “unique” as Russians claim their country to be, they are hardly immune to the effects of a worldwide backlash. They cannot afford to host an Olympics tarnished by political protests and a barrage of negative foreign press. This is why, perhaps, they have already started to change their tune, albeit so far in subtle ways.

The question remains whether any small concessions made by the Russian government will even matter to the worldwide LGBT rights movement, which has, as recent advances no doubt confirm, proven to be one of the savviest political and cultural movements in history. It's not likely to matter to Human Rights Campaign and Dustin Lance Black and the hundreds of organizations protesting Russia's discriminatory laws that the country's government is going to “respect” LGBT athletes participating at the games. And even if they tacitly admit to not enforcing the law during Sochi, this will mean little to Russia's LGBT citizens, who are facing increasing waves of violence and discrimination since the law's passing, including groups who are targeting gay youth and then filming the torture and gay bashing to post it on social media.

Russia can make symbolic gestures, but it's doubtful this will end the campaigns against Sochi's corporate sponsors, particularly in the U.S., who may not want to be associated with intolerance and discrimination. Even NBC, which is airing the games, has issued a strong statement. Mark Lazarus, chairman of NBC Sports Group, said the network would not ignore the issue. "If it is still their law and it is impacting any part of the Olympics Games, we will make sure that we acknowledge it and recognize it," he said in a recent meeting with television writers. "We as a company, obviously, believe in equality, opportunity for all. We don't believe that the games are in the spirit of the law that they've passed."

Which raises the question: Will Russia try to ban any media coverage of spontaneous protests that are sure to occur during the games? And if one of the probably hundreds of gay athletes attending decides to make a symbolic gesture or speak her mind on behalf of Russia's LGBT community, what then?

This is the predicament Putin finds himself in. Like Russia itself, he seems to be seeking the acknowledgment of his own power and independence while simultaneously craving the validation and respect of the public. It's hard to have it both ways. Since he was last president, social media around the globe has exploded. The ability of any government to control its message is greatly undermined by devotees of Twitter and Facebook who will take photos and video of every hate crime, start numerous petitions online and ensure that the media covers the issue nonstop. And while he may have success banning “propaganda” at home, his decisions to alienate the West with his actions may backfire at precisely the time when he expects his country to shine in the world's spotlight.