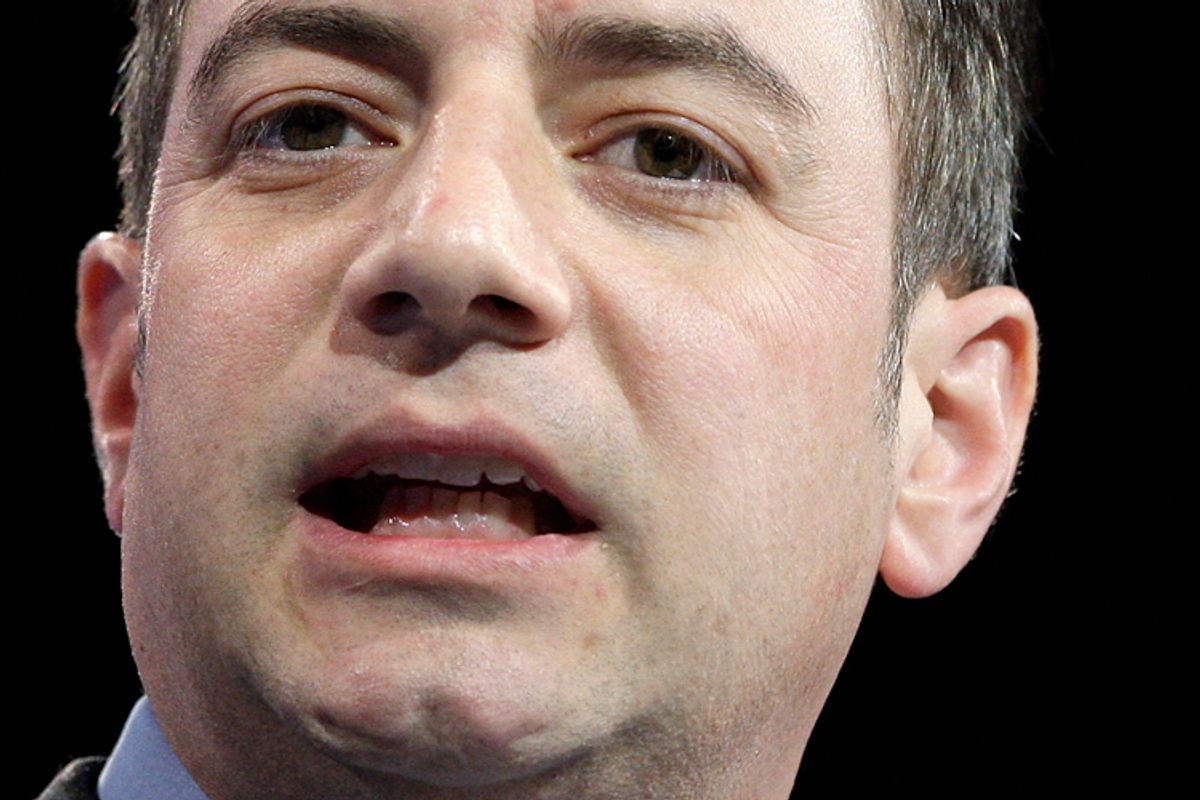 Republican National Committee chairman Reince Priebus is holding firm in his threat to deny CNN and NBC the right to air the 2016 presidential debates, in response to their planned programs about Hillary Clinton. “This special treatment is unfair to the candidates for the Democratic nomination in 2016 who might compete against Secretary Clinton," he has said, "and to the Republican nominee should Clinton compete in the general election.” This weekend, with a straight face, he waved away news that Fox Television Stations may produce and distribute NBC’s Clinton miniseries as “some little connection down the road.” An assortment of people, including Clinton supporter David Brock, have joined him, if not for the same reasons, to the same ends.

Pause for a minute and consider: Reince Priebus, a conservative, wealthy, connected, American man, white at that, is complaining about media marginalization.  This is so exciting! Do Priebus' comments mean the RNC is slowly, but surely, embracing gender parity and diversity in a profound way? Probably not, but his words, tweaked a little, are actually an argument for more diversity in media.

First, Priebus believes that CNN and NBC's "special treatment" is unfair to all other candidates and puts them at a marked disadvantage.  But it would be difficult for Priebus to come right out and say that the real special treatment we should be talking about when it comes to democracy, representation, truth, news and information is the “special treatment” of certain men in media.  Treatment that is grossly unfair and markedly disadvantages all women who run for office, including Clinton.  A broad review of our media and telecommunications environments quickly reveals the marginalized status of women and traditional, but soon-not-minority, minorities.

In 2010, the Global Media Monitoring Project reported that women make up only 24 percent of media commentators interviewed, read about or visible in mainstream broadcast and print. When reporters and producers of news are female they are twice as likely to confront stereotypes in coverage, as well as to feature story lines characterized as “female.” Men report 67 percent of news related to politics, 65 percent of stories related to violence and crime and 60 percent of news stories about the economy.  Only 13 percent of stories focused specifically on women, 6 percent on issues of gender equality or inequality.

During the last election, a study conducted by Fourth Estate found an effective silencing of women -- fully 70 percent of all election-related content was created or commented on by men. That number was even higher for “women’s rights” issues – where men were four to seven times more likely to be quoted.  This may be because 73 percent of TV new directors are men. In advertising, the numbers are even more skewed: 97 percent of creative directors in the advertising industry are men.

These problems persist across content areas and platforms. Between 1989 and 2009, coverage of women’s sports fell from 5 percent to 1.6 percent. The 2012 VIDA count of gender in literary magazine editing and bylines was just ridiculous.  Minority representation is similarly low in television and radio, at 21.5 percent and 11.7 percent of those respective workforces. In print media newsrooms minority representation has dropped in the past three years to just over 12 percent. The only glimmer of good news, as reported by the OpEd Project’s "Who Narrates the World" study is that new media seems to be slightly better in terms of women’s representation in the production of content.

Ownership numbers, as reported by the Federal Communications Commission itself, are equally dismal:  Media is almost entirely owned and managed by white men.  Women own just 7 percent of radio and television cable licenses, which is only partially explained by the fact that when many licenses were granted women couldn’t even own bank accounts in their own names.  Hispanic ownership of media is 2.5 percent, African-Americans, Asian-Americans and American Indians combined make up less than 1 percent of owners. White male ownership increased during the period of the FCC’S own study. And, yet, what was the agency recently poised to do? Dismantle a long-standing ban on cross-media ownership that will disproportionately negatively affect women and minorities and likely benefit ... Rupert Murdoch. Knowing Priebus, I imagine he has a plan to end this media tyranny -- maybe even a debate on Fox?

A lot of worries regarding the effects of media representation and ownership could be dispelled if we had a national broadband structure that enabled everyone, rich and poor, access to high-speed Internet.  Social media, which doesn’t artificially regulate production on the basis of chromosomes, is dominated by women and minorities for a reason.  But we don’t have such a structure. Our digital divide, in the words of guru Susan Crawford, is part of the media monopoly of our “New Gilded Age.”

Priebus also says the programming promotes “one particular candidate.” It's true that promoting one person above all others is something the mainstream media loves to do. Priebus' words echo our national commitment to individualism. The idea of one individual’s freedom, will, autonomy and power holds sway over the public imagination, especially the conservative imagination.  But usually this one individual is a man, and policies meant to help the individual usually maximize the freedoms, will, autonomy and power of men. Moreover, media have traditionally served only "one particular" type of candidate -- a male one.  Our entire news and information and distribution system is optimized to represent an entirely gendered consolidation of power.  So if Priebus wants to broaden the media's scope for the public good, he and the RNC should be focused on how to make sure coverage of the lives, work and accomplishments of women leaders proliferate.

Lastly, Priebus appears to be accusing the networks of liberal bias and lack of objectivity.  He seems, somewhat richly and ironically, to be harkening back to Fairness Doctrine ideas.  Let’s put aside for the time being the Koch brothers, Rupert Murdoch, Fox News, Clear Channel and failures of every administration to meet the FCC’s media diversitybmandate,  and focus on the commonly held idea that our news media and journalists are neutral and objective. First, this has never been true. Human endeavors are suffused with point of view.  From a gender perspective, what we traditionally take for “neutrality” is generally thoroughly male-oriented in terms of experience, interpretation and relevance. For example, during last year’s presidential debates, people were horrified when Candy Crowley “inserted her point of view” into the debate she moderated, but did not consider that Bob Scheiffer’s asking no questions about “women’s issues” relevant to the lives of tens of millions of women citizens was his way of “inserting a point of view.”  His omissions were in no way unbiased. They were normatively biased. Technology has only made media segmentation and the broad distribution of what is clearly opinion more possible and obvious. What Priebus and his party are fundamentally objecting to isn’t ultimately “liberal bias,” it's opinions that are rapidly challenging norms from which they have historically, disproportionately benefited.

Media justice is absolutely necessary for an informed electorate and a healthy democracy.  The current media environment is a primary factor in our well-documented political ambition gap between American girls and boys. This gap sadly illustrates the degree to which we’ve made it impossible for our children, and even most adults, to even imagine women as leaders.  But I don’t imagine the RNC is very interested in Priebus openly advocating for programming that would help close this gap, which is why he’s hatched this clever plot to force the issue.  I’m only disappointed that he waited so long. Why didn’t he speak up when the new FCC chair was up for grabs? Never, in its 80-year history, has the FCC been chaired by a woman.

Airing one documentary per day about Hillary Clinton for the next three years wouldn’t come close to addressing the problems we face with “special treatment,” the “promotion of one particular” candidate and the media “holding a bias.” I am really hoping that the loafered crusader continues to agitate for media reform and gender justice, sticks to his guns and refuses to allow anyone at all to air the 2016 presidential debates until they address his concerns about adequately and fairly informing the public about their candidates. That just might not look the way he thinks it would.