6 of the nuttiest right-wing statements from this week alone

With Congress in recess, offensiveness flourishes 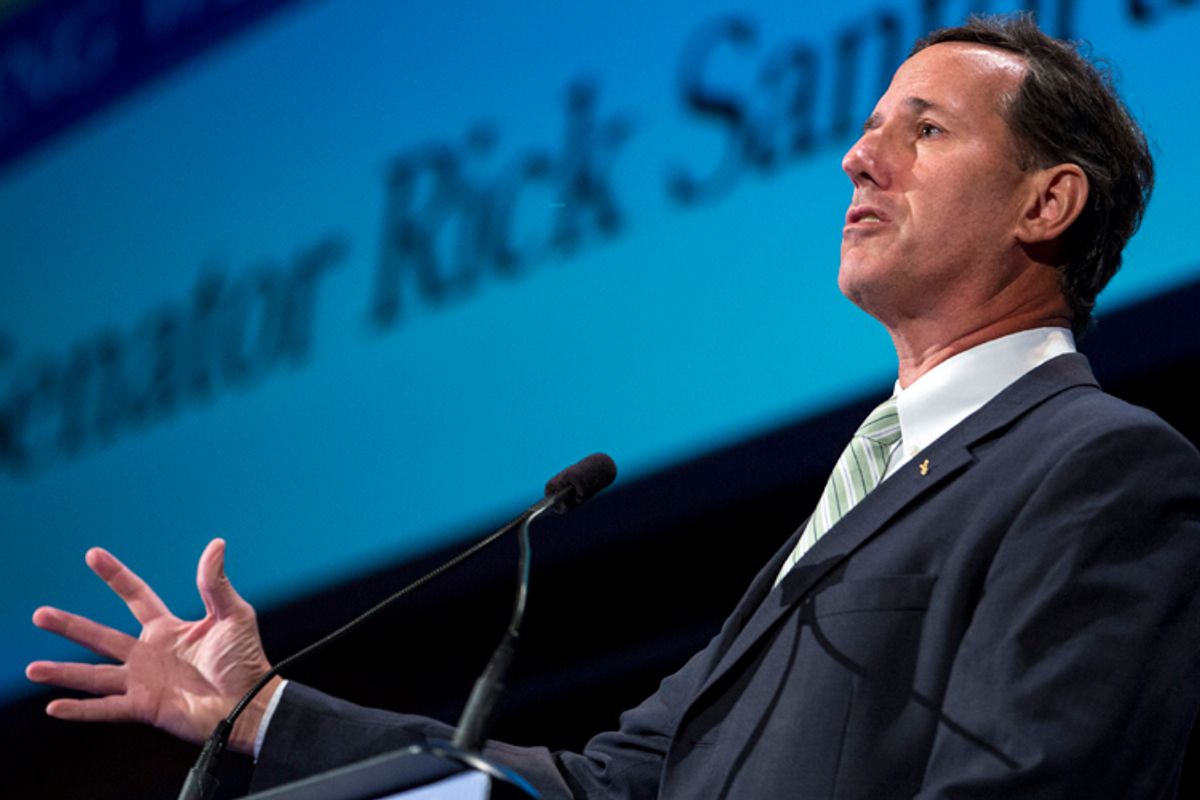 The right-wing crazies may have truly outdone themselves this week. With Congress taking its summer break, Tea Partyers and other kooks were suddenly uncorked (that word will come up again in another context, so look for it), taking to the airwaves, appealing to their bases and saying some of the nuttiest things we have ever heard. With straight faces! Things like, “tanning beds are racist," "Wendy Davis is an 'Abortion Barbie,'" "climate change is a religion" — you cannot make this stuff up. And if you did, no one would believe you.

You may have heard about the frantic, delusional attempts in the Republican-controlled House of Representatives to block, prevent, defund, wage war on and just outright deny the reality of Obamacare. These might be comical if they were not actually hurting real people who are suffering, and in some case dying because of lack of healthcare.

Rep. Ted Yoho probably thought he came up with a really smart argument this week when he went after a provision in Obamacare that places a 10 percent tax on tanning beds. ‘Das racist,’ he said, because dark people don’t need to tan. Here’s a little reality check for Mr. Yoho, as pointed out by Jamelle Bouie in the Daily Beast. Nobody needs to tan. Sitting under the ultraviolet light of tanning beds is bad for you.

“Risk for melanoma increases by 75 percent when people begin tanning before the age of 35, according to the International Agency for Research on Cancer. One study found that tanning beds cause roughly 170,000 cases of skin cancer each year, and at one point the Food and Drug Administration proposed banning bed use by customers under 18. When it comes to lowering costs in the health-care system, reducing skin cancer incidence by encouraging people not to use tanning beds is low-hanging fruit.”

Taxing things is what the government can do to encourage or discourage behavior, and so a 10 percent tax on tanning bed use is a provision to discourage this behavior in Obamacare. Snooki was upset about it, but Yoho one-upped her.

Of course, this absurdity demeans and misunderstands the very concept of racism, and is part of what is now a tradition among Obama’s conservative opposition to deliberately portray the first black president as being “the real racist.”

2. Rick Santorum: Liberals make it uncomfortable to shower at the YMCA

OK, pay attention here, because this is one of those convoluted arguments that only the deranged ultra-conservative brain can produce. For those of a more progressive and logical ilk, it’ll be a real mind-bender. Former, and perhaps future, Republican presidential candidate Rick Santorum recently told a group of antiabortion students (misleadingly called Students for Life) that liberals who support abortion rights “make it uncomfortable” for them to shower at the YMCA.

Here’s the background: The Town Lake Branch of the YMCA in Austin did in fact ban the “pro-life” group, who had come to town to support Texas’ severe abortion-restricting legislation, from using their facilities because the group was blatantly proselytizing, disrupting other members and generally using the YMCA as a forum to express their political views. Some YMCA staff even said the group was intimidating the people who worked there.

Santorum flipped this all around by telling the “Right-to-Life” students that this was a leftist plot. “Because they live it. They’re passionate. They’re willing to do and say uncomfortable things in mixed company. They’re willing to make the sacrifice at their business because they care enough … They simply won’t give up. We have the truth and we give up! We have righteousness and we give up because it’s unpopular!”

The intellectual contortion here is that, yes, while many pro-choice activists and people who are passionate about women’s health can be energetic in the pursuit of it (so, we guess, thanks, Rick, for the ... compliment?), for sheer drive, and unwillingness to give up, it is hard to compete with the vehemence of "pro-lifers" who are certain that God is on their side, and are willing to go to any length (shoot doctors, terrorize and lie to pregnant women) to win their battle.

3. Rep. Louie Gohmert: Brags about having "duct-taped" a defendant’s head, then later in the week manages to blend his Islamaphobia with his anti-Latino racism.

With some extra time on his hands, Tea Partyer Louis Gohmert enjoyed stepping in it at least twice this week.

First, on Fox News on Tuesday, he regaled host Sean Hannity with a delightful little memory from his days as a judge in criminal court in Texas. “I had one guy that was particularly out of line, and I warned him three times and then we duct-taped his head,” Gohmert told Hannity. “And we didn’t hear from him until it was his turn to talk.”

“That’s when you were a judge?” Hannity wondered. Even he was a little taken aback.

“That’s when I was a judge in felony court,” Gohmert replied. “Gave him three warnings, made the record and then wrapped him up.”

That’s when he was a judge, yes, a judge.

On Thursday, Gohmert was at it again. The topic: immigration reform, why he opposes it, with some Islamaphobia mixed in. He told his audience of business leaders that “radical Islamists” are taking Spanish lessons. The reason they are doing this: “We don’t have any fear of Hispanics coming into the country.”

But he does like fruit, so if we can just make sure the migrant workers are not radical Spanish-speaking Islamists, we should let them in to pick fruit cheaply.

4. Rep. Steve King: Global warming is more of a religion than a science.

You have to hand it to Tea Partyer Steve King. Once he commits to a totally wrongheaded offensive or just vile point of view, he does not back down. When he said a lot of the children of undocumented immigrants were drug mules with “cantaloupe calves” a couple of weeks ago, the fact that even conservatives in his party rebuked him just made him dig in even further. So it was this week, when, back at home in Iowa, the congressman decided to spout off ignorantly about climate change. Global warming, he said, is more of a religion than a science, he told the audience at an event for the right-wing, climate-change-denying group Americans for Prosperity.

This is a perfect example of that opposite world, doublespeak, black is white, up is down, lies are truth type of rhetoric that the right wing has perfected. Because, of course, scientific is exactly what climate change is, at least all the scientists seem to think so, and denying climate change is, well, the opposite of science.

The next day, still in home state Iowa, he elaborated on his theme, which evolved into more of a “let’s look at the bright side” of our warming climate, however unscientific that theory might be. For Iowans, he pointed out, there could be more corn. Rising sea levels would mean more rain, more rain means more corn. Simple. Never mind that NASA studies show that, both droughts and rainfall would increase to dangerous proportions with a warming planet. People need to focus on the “positive aspects of global warming,” Pollyanna King said. “I spent a lot of my life cold, it felt pretty good to get warmed up.”

Doesn’t everyone feel much better now?

5. Mike Huckabee: For your weekly dose of Islamophobia

The closing of U.S. embassies in the Middle East due to possibly trumped-up terrorism threats gave Fox News host and former presidential hopeful Mike Huckabee the opportunity to unleash, or should we say “uncork,” his Islamophobic views — which are voluminous.

“Can someone explain to me why it is that we tiptoe around a religion that promotes the most murderous mayhem on the planet in their so-called ‘holiest days’?” he asked, rhetorically, of course, since it is his radio show. “You know, if you’ve kept up with the Middle East, you know that the most likely time to have an uprising of rock throwing and rioting comes on the day of prayer on Friday.”

“So the Muslims will go to the mosque, and they will have their day of prayer, and they come out of there like uncorked animals — throwing rocks and burning cars.”

Just to be clear that he is not prejudiced against all Muslims, Huckabee did say not all of them are violent, but he is a serious student of the Islamic faith and habits, and through this serious study and observation, he has learned “that the most likely times for them to erupt in some type of terrorist activity, violent storming of an embassy, is on their holy days.”

Christians, on the other hand, he points out, never riot on Christmas or Easter.

“Now, my point is — I mean do you ever say ‘Oh boy, it’s Christmas! Oh my gosh, these Christians are going to come out of that Christmas Eve service and they are going to Walmart, and they are going to so rip that place apart, because you know what happens when they go in there and pray about Jesus. And they get out of there and they go straight to the mall, and they just, I mean they set fire to the place.’ I mean, when Christians get out of their Christmas services, about the worst thing they do is commit the sin of gluttony when they go to some Christmas dinner, be it at a restaurant or someone’s home,” Huckabee ranted.

Apparently, he has never seen the riotous, mob-like behavior of so-called Christians on Black Friday, the holiest day in American capitalist Christendom.

Speaking of Christians, and how they aren’t at all crazy or prone to violent outbursts …

We know, we know, it is not exactly news that Pat Robertson may be a little loony. But before we get to this week’s shenanigans, let’s review some of the accomplishments of the right-wing preacher/host of "The 700 Club": predicting the end of the world in 1982, calling for the assassination of Hugo Chavez and arguing that most recent natural disasters and terrorist attacks result from our sinful ways -- translation, approval of gay marriage. Last week, he advised a caller to burn down the house, since it was clearly possessed by demons.

But, as most people know, one of the true marks of “crazy” is not being able to differentiate between reality and, well, non-reality. In that vein, Robertson has said in the past that lusting after a woman is the same as adultery (the assumption is that you are a man; if you are a woman, then it’s not just adultery, it’s going to cause a tornado). This week, he said, murdering someone in a video game is the same as murdering someone in reality. Here’s the exact quote: "If you murder someone in cyberspace, in a sense you're performing the act whether you like it or not."

Gamers, we’re talking to you.