Is Johnny Depp's star falling because of his breakup? 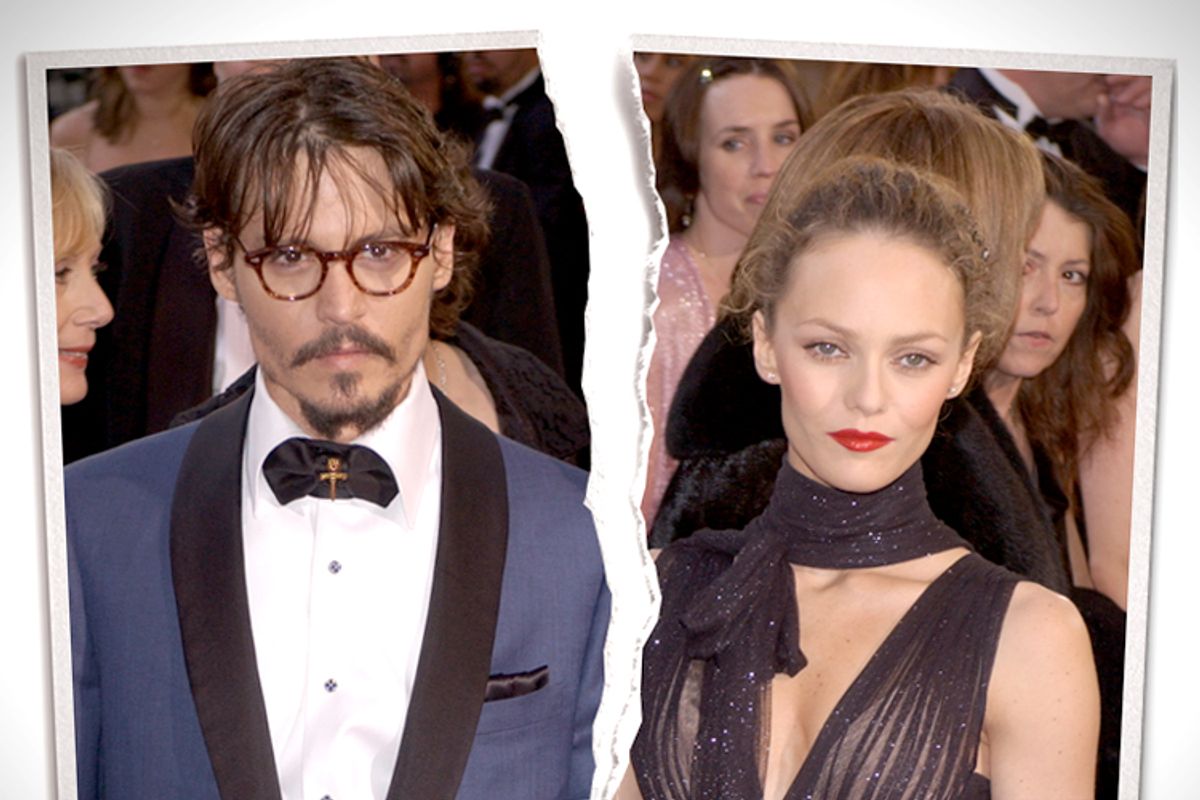 It’s not because of the seemingly endless layers of silk scarves. Or the excessive rings and necklaces. Or the burnt out holes in his hat. No, because when you love Johnny Depp you love him for the eccentricities. You love him for the way he speaks, a sort of quiet blend of Cary Grant and Madonna after she moved to England. And it’s not because he’s older. I like my movie stars to age with me. I was only 20 when I met Paul Newman face-to-face during a reading in Manhattan, and practically plopped myself onto his lap. His blue eyes gleamed like they did in "Butch Cassidy and the Sundance Kid."

For years Johnny reigned at the top of my “list” — you know, that list. The fantasy list. The list where I get permission from my husband to cheat if Johnny Depp just so happened to be on the train from New Jersey to Manhattan, and, like, asked me, “Is someone sitting here,” and we ended up jumping off at the next stop and catching a taxi to the nearest hotel and he covered me in rose petals and fed me 70 percent cacao dark chocolates. Anyway. The fact that my husband wears round tortoise-shell glasses and has grown his hair out to his shoulders is no accident. It’s been a long love affair between me and Johnny — okay, fine, obsession. I first fell in love with Johnny somewhere between "21 Jump Street" and "Cry Baby," like most of us did. I thought of myself as Winona, tattooed forever on his arm.

And when he and Vanessa Paradis started making French-accented babies together, I swooned, because I too entered my family-and-kids phase. It wasn’t photos of Johnny bare-chested on his yacht I wanted to see, it was the name of his yacht that attracted me: JoVaLiRoJa. The first two letters of each family member’s name enmeshed like a vanity license plate from the ’70s. He was a dedicated family man. Until the tabloid storylines changed, warning that their split was imminent. And that another woman was involved. A 26-year-old woman.

Then the movies started tanking. "The Tourist." "The Rum Diaries." With losses of up to $167 million, "The Lone Ranger" is on the track to becoming the biggest box office bomb of all time. Kevin Fallon of The Daily Beast wondered recently if his career was "doomed." Fallon blamed it on Johnny’s alternative soul, because after all, Johnny Depp, who broke all of the Tiger Beat rules, "just wasn't supposed to be part of that [movie star] conversation in the first place."

It's true that Johnny Depp has been revered for his unusual choices. Anti-testosterone roles like Edward Scissorhands, Ed Wood, Gilbert Grape and Jack Sparrow have always been part of his appeal. But I tend to think his box office fall is for a different reason altogether.

The racism of "The Lone Ranger" probably plays a role. So do that movie's awful reviews. But maybe, unconsciously, viewers are also mad about his split with Paradis about a year and a half ago. As Hollywood standards go, their 14 years together were the equivalent of 50, and we as a celebrity-driven public have gotten used to seeing them together as a unit. The boat. The kids. The cryptic interview in Vanity Fair about his private island and locking himself away with the family, feeding hot dogs to sharks. But when Johnny Depp stepped out (my sources say, and by sources I mean the front cover of US Magazine) of his relationship to be with 26-year-old Amber Heard, isn't it possible that the box office star's bankability dove along with it?

The idea of Hollywood corralling their celebs in arranged relationships is nothing new. Not much has changed since the days when Rock Hudson married Phyllis Gates to hide his sexuality and promote films. I’m not suggesting at all that Johnny Depp somehow decided to make babies with Vanessa Paradis because he thought it would be good for his career. But when you’re trying to boost the box office or campaign for an Oscar, it doesn’t hurt in Hollywood when your successful career coincides with your “successful” relationship.

Will Smith and Jada Pinkett Smith. Kelly Ripa and Mark Consuelos. Tom Hanks and Rita Wilson. Kevin Bacon and Kyra Sedgwick. Beyonce and Jay-Z. These are couples whose careers have been consistently on the upswing. (Okay, so Will Smith and Jada Pinkett Smith hit a tabloid bump a few years ago, but it didn’t cramp their images, their box office returns or their children’s careers whatsoever.) And their success may have something to do with how we perceive them as couples.

Even Queen Bey dedicated her tour to her marriage (attracting much criticism) by dubbing it the “Mrs. Carter Show.” But as Tamara Winfrey Harris pointed out in an article about the pop star, Beyonce isn’t actually a Mrs. Carter at all: the couple legally combined their names to create the hyphenate ‘Knowles-Carter.’” Why, then, does Beyonce draw on the "Mrs. Carter" moniker? Maybe because she knows that a married couple — even when each person in that couple is a wildly lucrative mogul — is a powerful concept. Celebrity mags also know the figures: marriage sells. (So does breakup — but that stems from marriage. Right?) In fact, just last week, on Barack Obama’s birthday, the first lady got almost 10,000 retweets when she tweeted a personal photo of herself and the president snuggling on the couch.

And of course celebs in love are appealing — those of us in relationships want our relationships to work! We buy into the hope that it will. “Buy” is the operative word here. Because the real secret (or not so much, just ask me, I’m on my second marriage) is that between negotiating dishes and affection and child care and the how-are-we-going-to-pay-for-that conversation, marriage can be incredibly hard.

So if Johnny Depp is happy (even if it’s with a woman half his age) then who am I to judge? For all I know, he and Vanessa Paradis fell out of love because that shit just happens. As my Jewish grandmother always said: What do you care? But I do. I care because it's disappointing to see a 50-year-old man not being able to find satisfaction in a woman who is closer to his own age (like Paradis, who is 40). I care because it taps into my own fears about my marriage and how my husband sees my sagging skin and the bags under my eyes.

In the end, is it so wrong to want our celebrities happily married? Is it wrong to want to see Johnny Depp with Vanessa Paradis, floating off into the sunset to their private island on their yacht?  I’d like to dream one day that I could have the same luxury. Even for a little while. Even if it’s all fake.