Russell Simmons is just the latest to follow the misstep-outcry-apology cycle. We need to demand more 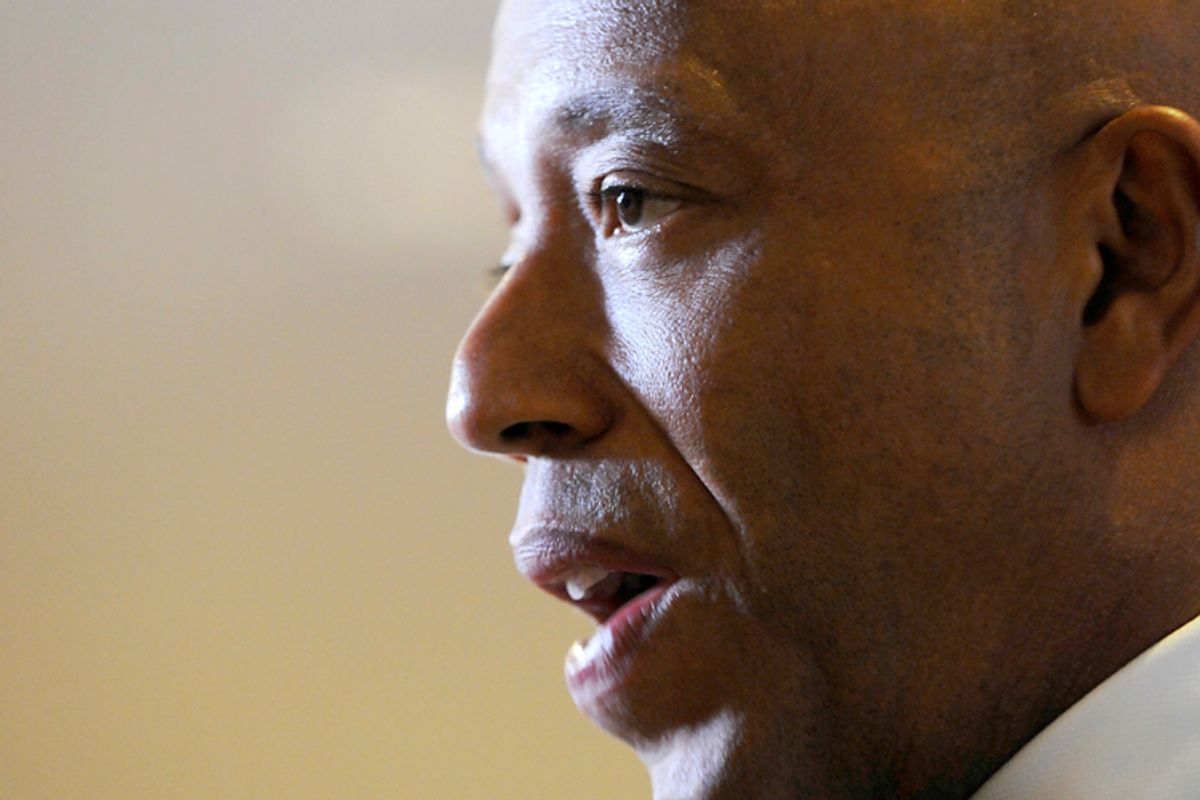 The fate of black women in popular culture is rarely nuanced. Black women are the help or the put-upon wife or the strong black single mother or the sassy friend/co-worker/stranger or the overly ambitious single woman. Like most representations of all women in popular culture, the black woman can be described with one short phrase. Depth is not necessary. This is a matter of supply and demand. In entertainment, as in life, audiences don’t seem terribly interested in people who deviate from stereotype, people who challenge what we think we know about one another.

When "Django Unchained" was released, I considered the movie the top of a very slippery slope, an illustration of how badly portrayals of black Americans can go awry in irresponsible hands. I have since wondered where that slope might end. Earlier this year, I thought the bottom of that slope might be Tyler Perry’s appalling morality tale "Temptation," the conclusion of which is an adulterous wife losing everything, being brutally beaten, infected with HIV, while her solid, faithful husband finds happily ever after with a beautiful new wife and son.

I was wrong. We may have finally found the bottom of that slope in the most unexpected place. The year is 1851. Harriet Tubman and a male slave conspire to videotape “Massa” having sex with Harriet because it is their only chance to “gain freedoms.” Other highlights are the line, “drop it like a hot comb” and “Oooh Miss Harriet,” and “get to work on that railroad, white n*gga.”

Where to begin? The video, by Russell Simmons' All Def Digital, is an unholy union of a rape joke and a race joke that isn’t even funny. The acting and writing are terrible. The premise is so absurd that we can overlook the impossibility of making a sex tape in the 1800s and move right into trying to make sense of the number of bad decisions and lapses in judgment that went into the conception, production and release of this comedy skit.

It goes without saying that outcry has been swift. Outcry is always swift online. There’s little time for reflection but there is time for rage. We can find some measure of catharsis in decrying the terrible things we see. The NAACP contacted Simmons, asking him to take the video down, and he did. Simmons says he “gets it,” offering a half-assed apology — he thought the concept was politically correct.

Simmons is, in fact, sorry people are offended; he is not sorry he thought it was appropriate to tread so heavily and carelessly on history, on the life of Harriet Tubman, on the sexual violence slave women and men were subjected to. This is the kind of apology we get when there is a public expectation for immediate and shallow contrition in the wake of a flagrant misstep. Perhaps we get the apologies we deserve because while we demand apologies, I’m not sure we demand real change. We don’t demand anything more rigorous from public figures, from ourselves. This misstep-outcry-apology cycle is the modern version of public hangings. We stand in the virtual public square until our blood thirst is satisfied and then we wait for the next execution.

The video has been taken down but it has gone viral. In a very real sense, like so much online content, this Harriet Tubman sex (or more accurately rape) tape has become infectious. There is no cure because once something is posted online there is no removing it, not really. When people like Simmons take down offensive online material, the gesture is symbolic. It is, like the public apology, a performance of contrition. What Simmons gets is that people are angry, and he wants to make that anger go away rather than truly take the time to reflect on where he and his creative team went wrong.

I initially thought I was angry about the video, but I’m not. I am hardly surprised. There is no bottom to the slippery slope of flawed representation. A Harriet Tubman sex tape is the kind of cultural product we will get when anything goes, when we should be fine with all manner of creative expression because creative freedom is paramount. Nothing is sacred. We’ve known that for some time now.

We have to be fine with the exploitation of women in most forms of entertainment, and we're supposed to respect reclamation when artists pepper their music with the N-word and when Tyler Perry flourishes and Quentin Tarantino is indulged and when bro-comedians have massive, loyal followings and when Robin Thicke is just, you know, being ironic. Supply and demand. We are given what we ask for, or at the very least what we consume uncritically and silently.

I have no doubt that before our attention shifts to some other terrible thing, there will be impassioned defenses of the sanctity of unfettered comedy and creative expression. It is always interesting, what we choose to respect and what we don’t. There will be counterarguments. There will be commentary about the commentary. That’s the script and we’re getting pretty good at following it. In the meantime, nothing will change unless we demand a different kind of supply.