What picketing taught me about feminism 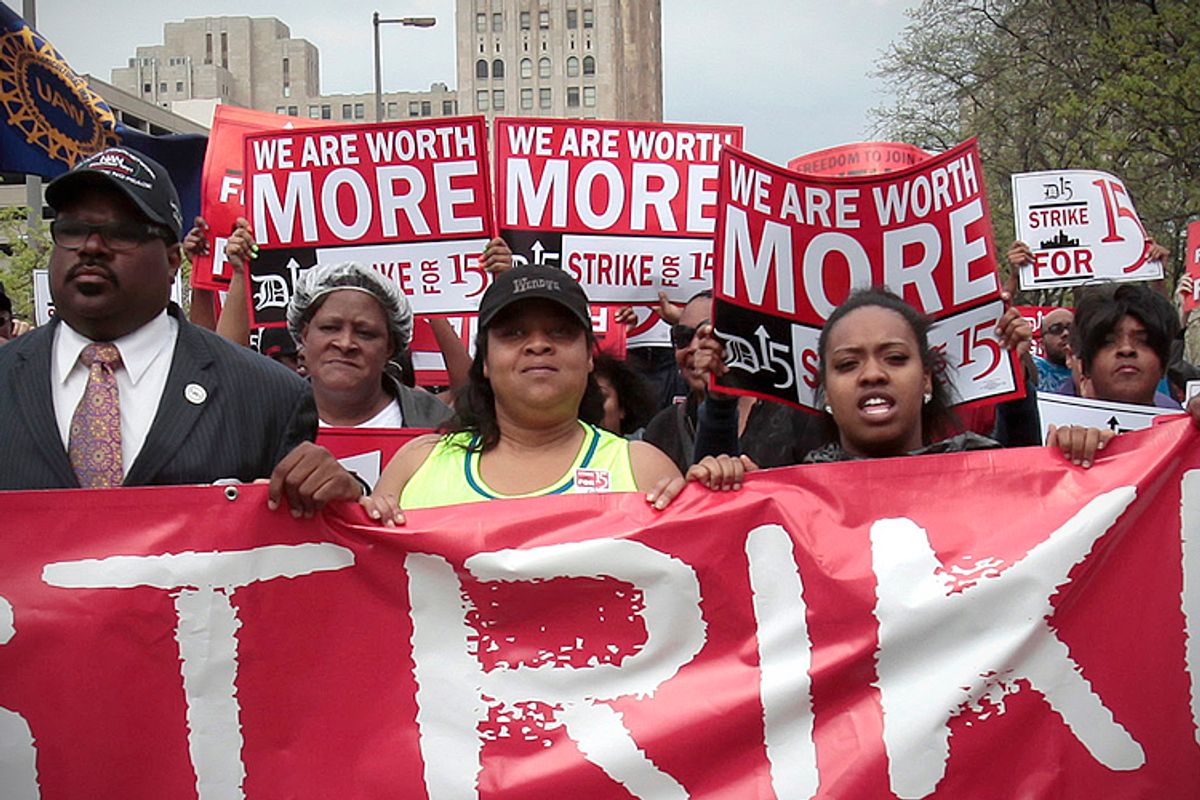 Workers and labor activists march for a higher minimum wage for fast food workers in Detroit, May 2013. (Reuters/Rebecca Cook)
--

The first time I walked a picket line, I was twenty-six years old and unemployed.  It was late afternoon, a chilly November day in Northern California.  I was handed a picket sign and a chant sheet, and I joined the line and started to walk.  I mouthed the chants until I picked up the rhythm and the words.  It was call and response: my role was clear.  When it grew dark, we traded our picket signs for candles and began a march around the parking lot of the hotel we were picketing, singing a song in Spanish that I didn’t know.  By the second verse, I had picked up the tune, while the paper in my hand gave me the words.  I tentatively added my voice.

There are few things more beautiful than human voices in unison, and there in the windy dark of a suburban parking lot, I felt a sense of unity with the people who formed the circle with me.  Soon thereafter, I gave myself over to the labor movement, chasing that sense of unity full time.

Picket lines are always different and always the same.  You picket with different people.  You sing different songs.  You target different locations.  But you are always walking in a circle, a few steps behind one person and a few steps in front of another.  After the novelty wears off – and when you’re walking in a circle, it wears off quickly – you grow bored and want to leave.  But there’s an inertia to walking in that circle.  You go around one more time, and then one more, and then one more.  Because if you leave, the circle will be smaller, and the chants will be softer, and it’s only one more time around.

That is the ethos of the picket line.  You grab a sign.  You get in line.  You sing the songs and chant the chants.  You walk through blisters.  You chant past hoarseness.  You give yourself over to the line.

Picket lines have been on my mind this week, as a conversation about the racism of mainstream feminism exploded on twitter thanks to Mikki Kendall’s #SolidarityIsForWhiteWomen.  The hashtag let loose a torrent of anger and pain from women of color who have been excluded, marginalized, tokenized, silenced, devalued, and erased by a mainstream feminism that too often focuses on the interests of white women.  Kendall’s sadly non-ironic phrase invokes the perversion of “solidarity” that has been used as a tool to suppress women of color’s concerns about racism within feminism.

When women of color speak out about the structural racism that has been reproduced within mainstream feminism – as occurred when women of color like Flavia Dzodan and brownfemipower spoke out about Hugo Schwyzer – they are typically met with exhortations not to reveal divisions within the ranks of women.  To remain in the feminist club, we are expected not to betray our gender in favor of our race.  The fact that we can’t separate those parts of ourselves even if we wanted to is conveniently overlooked.

This superficial solidarity benefits the few to the detriment of the many, a total bastardization of the Industrial Workers of the World’s classic call to solidarity, “An injury to one is an injury to all.” (It is pertinent to note that the Wobblies were unique among US unions in the early 20th Century in organizing across race, class, gender, immigration status, and industry.)  While the stifling of women of color’s voices may help to advance the concerns and careers of a select few, it does not improve the conditions of women in general.

The calls for pseudo-solidarity are representative of a strain of feminism that exalts individual achievement and self-actualization.  This is the feminism of leaning in to unpaid internships, of obsessing over whether some women can have it all while ignoring the vast majority of women who are struggling just to have enough.  It’s the feminism about which opting-in and opting-out trend pieces are written, the only feminism that makes it into the mainstream media.  Overwhelmingly, it’s a feminism by and for middle-class, educated white women.

That this exclusionary feminism should have co-opted the language of solidarity is infuriating to me because I believe that true solidarity is what feminism needs, not as a way to stave off criticism, but as a tool to achieve our collective liberation.  In a brilliant essay at Black Girl Dangerous, Asam Ahmad quotes Sara Ahmed defining solidarity: “Solidarity does not assume that our struggles are the same struggles, or that our pain is the same pain, or that our hope is for the same future. Solidarity involves commitment, and work, as well as the recognition that even if we do not have the same feelings, or the same lives, or the same bodies, we do live on common ground.”

Over the past few days, I have seen many white feminists respond to #SolidarityIsForWhiteWomen by pledging to listen and learn.  This is welcome and needed humility, and a step to achieving solidarity, but listening and learning is not enough.  The work Ahmed speaks of requires more.  After a requisite period of listening and learning, some mainstream white feminists might start writing and talking more about women of color, but in so doing, they will continue to drown out women of color speaking for themselves.

And this is where I return to the picket line.  The practice of solidarity that I’ve learned through direct action is that of putting my body toward the service of the collective.  This is not always easy for me.  As a half-Jewish/half-Chinese ambitious and opinionated woman who was raised by a second-wave feminist and educated in elite circles, I too was taught that speaking my mind and raising my voice is the apotheosis of feminism.  Suppressing the urge to grab the bullhorn, choreograph the march, and rewrite the slogans on the picket signs can seem like a capitulation rather than a victory.  But by myself I am nothing, or at least I am much less than what I can be if I’m acting in concert with my sisters.

No one person makes a picket line, but by showing up, I can take its number from 37 to 38 or from 999 to 1000.  No one voice creates a roar, but by chanting, I can amplify the volume.  My value to the line is in being the body that walks behind the person in front of me and in front of the person behind me.  My value is in being present and unremarked upon, a part of a broader whole.

I’d like to see white feminists and feminists with other forms of privilege apply this principle to our collective feminism: to think about how you can amplify the voices of women of color without drawing attention to yourselves.  Don’t silence yourselves, or remove yourselves.  That will only weaken all of us.  Instead, figure out ways to share your resources with other women who possess less.  Step back and help others to step forward.  Raise your voices at full volume in response to women of color’s calls.

There is nothing more beautiful than the sound of voices in unison.  The challenge is ensuring that women of color hold the bullhorn.  So grab a sign and get in line.  There is plenty of work to be done.