Like the NBA's Jason Collins, Young is a minor figure in his sport - but he's still a pioneer 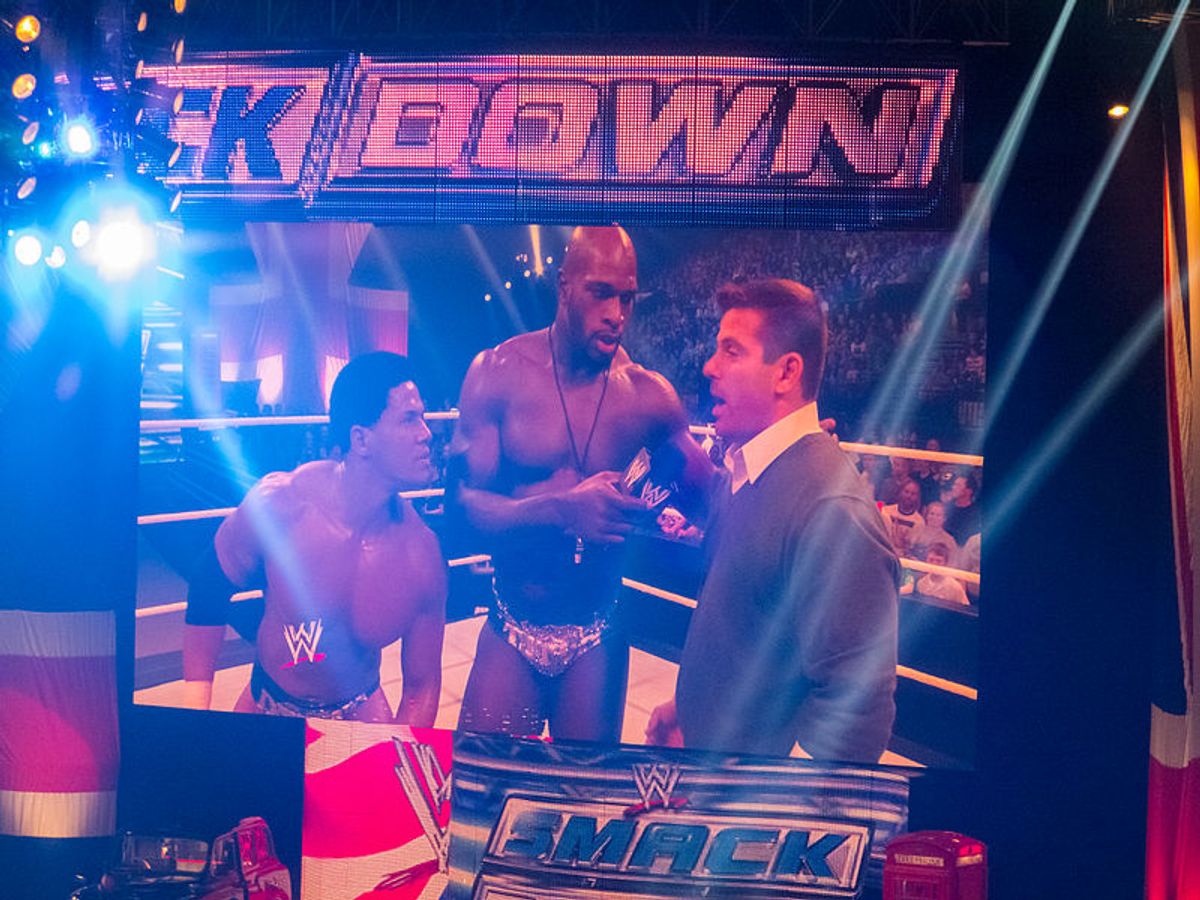 Out-of-the-closet. African-American. And a guy who is not a superstar but willing to do the dirty work needed to make a team successful and/or keep a job in a highly competitive field.

This was the story surrounding Jason Collins, no superstar but a member in good and long standing of the NBA’s fraternity, when he revealed to the world he was gay. They happen to be the same non-complete-sentences that can be used to describe Darren Young, the first active WWE Superstar, to use their corporate branding if not quite the most accurate word to describe someone who does what Darren Young does, to reveal publicly that he’s gay.

Darren Young is far from a huge name in wrestling. Currently, he’s one-half of a tag team dubbed The Prime Time Players. They’re goofy heels who boast about having “millions of dollars” that they use to party in nightclubs; there was, naturally, a signature dance done while chanting all this. Because it’s their job, they usually and effectively “put guys over” – parlance for losing matches to opponents the WWE has big plans for. Darren’s known for doing the little things required of the role; he’s willing to throw his body all over the ring to make his assigned enemy look good, and also pulls very good facial expressions to demonstrate his cockiness. And he’s also seemingly willing to play second banana to his partner, Titus O’Neil, a former Florida State football player dripping with charisma but lacking polish and someone whose WWE career will almost certainly climb beyond being one of two Prime Time Players.

All of which is to say that Young serves the same purpose as Jason Collins – a bench guy who can come in for a few minutes, bang for a few put-backs and rebounds, play somewhat effectively post defense and generally not fuck things up. This is a solid gig, if also a somewhat tenuous one. Both Collins and Young have, potentially, a great deal to lose through their decisions to announce who they really are. More to the point, they could very well lose it.

These are, both of them, two of the most interchangeable roles in their respective industries. Plenty of big guys can do the requisite dirty work in Europe and the NBDL; they would do anything for Collins’ spot and, most importantly, would cost less than an established player. And there’s also a lot of “solid hands” dotting the independent scene and the WWE’s minor league who would love to take a bump off the ring apron into the steel railing at ringside in order to grab some of Vince McMahon’s money. They dream of doing just that.

But while Collins proved himself as absolutely fit to carry the weight of being the first out active-duty male athlete, he already knew his role. Darren Young, as part of a sprawling scripted drama, doesn’t know how he’ll be used. Although he knows, as all wrestlers do, that he will be used in whatever way the WWE sees as most useful, lucrative and dramatic. That does not mean he’ll be used gently, or well.

The WWE is a corporation that, like all publicly-traded entertainment companies, loves using its employees as a public relations tool – Stephanie McMahon, daughter of CEO Vince and supposedly next-in-line to take over the company when her father decides to hand down the reigns, has already tweeted a hearty congratulations to Darren. The WWE has also embarked on its “Be A Star” anti-bullying campaign; a minority wrestler who has unveiled his sexuality could certainly be an effective spokesperson for that campaign. And since wrestling has always been happy to afford its fans a peek behind the scenes (if not necessarily a peek at actual, true things), it’s likely that Darren’s sexuality will become a part of his character’s persona, and his on-air stock could rise.

It’s likely that Darren’s decision to come out could result in him turning into a good guy, especially in light of the failed attempts of Linda McMahon (wife of Vince and formerly an incredibly awful on-air character) to buy her way into the Senate in both 2010 and 2012. Linda ran as a centrist Republican in both elections. She took a “this is a state issue” stance when asked about her views on gay marriage, the coded message for “I’m not revealing my opinion on this since a public viewpoint either way will hurt my chances of gaining power.”

Not-too-shortly after her last electoral loss, the WWE debuted a new character named Zeb Colter, a seething font of Tea Party-accented anti-immigrant rhetoric. He cuts interviews in front of a shabbily hung “Don’t Tread On Me” flag. Colter – a longtime performer best known for playing redneck Dutch Mantel – currently manages a tag team. One member of his stable is Jack Swagger, the prototypical sandy-haired Middle American cocky jock. The other is Antonio Cesaro, a Swiss-born strongman that Colter described as the “right kind of immigrant.” It hasn’t been stated what makes Cesaro “right” but the subtext is clear to the WWE Universe – Zeb debuted attacking Mexican wrestler Alberto Del Rio, whose brown skin, Colter made clear, makes him the wrong kind of everything.

Zeb and his stable – who put their hands over their hearts and chant “We The People” before and during matches – have a very visible role. Swagger was briefly a WWE champion and also had an upper-card match at WrestleMania. And Cesaro, a longtime favorite on the independent scene, has been pushed as a phenom for large parts of his tenure.

They’re also cast as heels, allegedly crafted due to the McMahon family’s belief that the far right cost Linda the election. A tag feud between these two seems a natural fit, with Darren Young cast as the good guy.

But if the WWE does push Darren Young as a hero, it will be a marked turn for how wrestling portrays homosexual characters.

Wrestling has always used sexuality as an archetype. The first true villain of the industry was Gorgeous George, a flamboyant pretty boy who dressed feminine and had male servants at his disposal. Adrian Adonis was a glammy T-Rex style cross-dresser who weighed over 350 pounds and feuded with Hulk Hogan in the 1980s. Goldust – played by Dustin Rhodes, the son of the southern populist son-of-a-plumber legend “American Dream” Dusty Rhodes – was a Norma Desmond-inspired creep in gold face paint and unisex jumpsuit with female mannerisms who, in his earliest incarnation, molested his good guy opponents as an in-ring psychological ploy. Billy “Assman” Gunn and Chuck Palumbo teamed up in the ‘90s, partnering with personal stylist Rico, and played a highly affectionate heel tag team; they went so far as to arrange a gay wedding but revealed it as a publicity stunt. The two asserted that they were completely straight, and turned face soon after.

But Pat Patterson is professional wrestling’s most interesting and, until Thursday, most well-known homosexual. Patterson was a star in the 1970s and ‘80s who was open about his sexuality even then. His longtime partner is fellow wrestler Steve Lombardi, best remembered as The Brooklyn Brawler. Patterson’s mind for wrestling was so well-respected that he ascended the ranks of the WWE after his days in the ring were over, outlining the matches and crafting the finishing segments of some of the WWE’s most legendary matches. He is also attributed with creating the concept of the Royal Rumble, the promotion’s major winter pay-per-view event and arguably the greatest format in the industry’s history.

Patterson’s knack for seeing and creating narrative and dramatic stakes, and genius for developing matches eventually made him Vince McMahon’s real-life second-hand-man. A case could be made that Patterson, during his lengthy career working behind-the-scenes, ranked right behind his boss as the second most influential – and powerful – person in the industry.

But even a man with that power saw his sexuality used as a way to elicit jeering reactions from the audience. Patterson played as a corporate yes-man stooge to Vince McMahon’s evil boss during the WWE’s Attitude Era in the’ 90s and frequently found himself the recipient of attacks from such good guys as “Stone Cold” Steve Austin and The Rock. Jim Ross, the Oklahoma-twanged lead announcer who served as the audience’s proxy, would frequently sneak in (or just shout) heavy innuendos referencing Patterson’s sexuality. Paterson was never officially outed as a gay man on-screen. However, the Attitude Era coincided with the Internet’s rise, which allowed for wrestling fans to learn about Patterson’s real-life role in the company and his sexuality.

It’s unlikely that the WWE, in the post-DOMA world, would use Young’s public disclosure as a way to showcase him in a “gay equals bad” manner and suffer a public relations hit. But Jason Collins is still looking for work in the much more mainstream NBA, and this is wrestling. Which means that any expectation, however high or low, could well become a reality if it plays. The politics are the politics, but the WWE is the WWE. If Young’s story sells, they'll sell it.