A nation of truthers 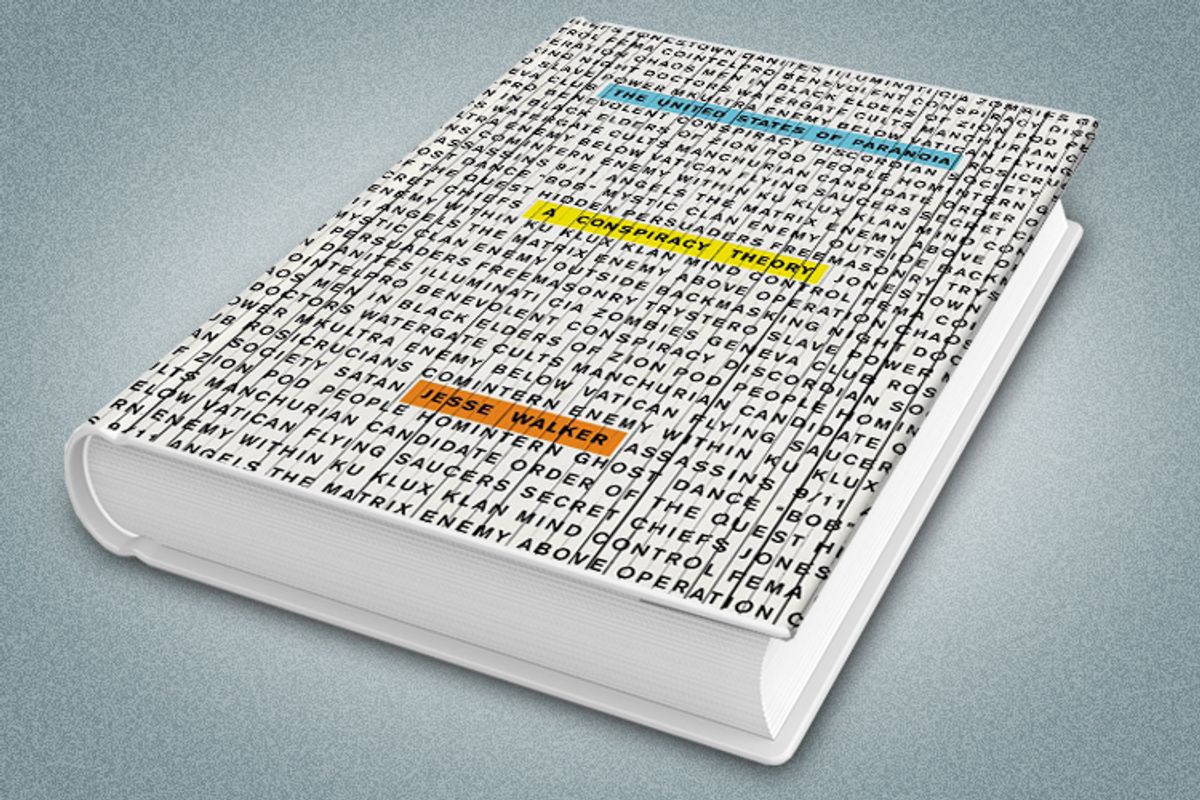 "It was a paranoid time," writes Jesse Walker after recounting an elaborate, half-forgotten conspiracy theory from the 19th century. (It involved "the Slave Power," which some 19th-century Americans believed had been responsible for poisoning several officials who had in fact died of natural causes.) "In America," he adds, "it is always a paranoid time."

That's the core argument of "The United States of Paranoia: A Conspiracy," a new cultural history by the Reason magazine editor. Walker's book is a riposte of sorts to the most famous treatment of America's suspicious fantasies, Richard Hofstadter's "The Paranoid Style in American Politics," an essay first published in 1964 and oft cited since. Walker calls Hofstadter's essay "flawed but fascinating," and gives Hofstadter credit for the canny observation that the people who battle conspiracies have a tendency to form organizations and initiatives that eerily resemble those of their alleged foes. (Joe McCarthy, meet Joseph Stalin; you two guys have a lot in common.) But where Walker feels Hofstadter went wrong is in his assertion that "political paranoia is 'the preferred style only of minority movements'" and that the style has "a greater affinity for bad causes than good."

Au contraire, says Walker. "Educated elites have conspiracy theories, too" and the nation's long history of "moral panics" illustrates the ways that "influential social institutions" -- from the government to churches and political parties to the press -- engage in paranoid thinking, sometimes with lethal results. "When I say virtually everyone is capable of paranoid thinking," Walker writes, "I really do mean everyone, including you, me and the founding fathers ... It is even possible to be paranoid about paranoids." He then proceeds, in lively and often witty fashion, to prove it. Some of what Walker has to say will be familiar, but few readers are likely to get to the end of the book without having cherished notions challenged.

"The United States of Paranoia" divides conspiracy theory into five modes: the Enemy Outside, the Enemy Within, the Enemy Below, the Enemy Above and the Benevolent Conspiracy. These categories tend to ooze into and around each other: For example, the early colonists' belief that Native Americans worshiped or were in league with the Christian Devil fed the furor of the witch hunts of the late 1600s. (For a fuller development of how the crisis in Salem can be seen as a manifestation of anxieties about the Indian Wars, see Mary Beth Norton's excellent "In the Devil's Snare.") Walker's labels are mostly self-explanatory, but, FYI, the Benevolent Conspiracy encompasses notions of secret societies, like the Rosicrucians, or unseen forces, like wise aliens or angels, who supposedly guide or protect humanity.

Walker would need six more volumes to provide a comprehensive account of the various conspiratorial beliefs that have seized Americans, so don't expect to find every crank hoedown accounted for here. Many of these beliefs, he notes, have some basis in fact: While it's highly unlikely that "night doctors" prowled cities looking for African-Americans to kidnap, kill and dissect (a widespread rumor in early 20th-century black communities), it is certainly a documented truth that the white medical establishment, being a white-dominated establishment, had a cavalier attitude toward its black patients and sometimes used them inhumanly, as in the infamous Tuskegee Experiment of 1932 to 1972. White people really have conspired against blacks and lied about it, which is one reason why conspiracy theories about everything from AIDS to fast food have flourished in African-American communities.

Walker regards conspiracy theory as a form of "folklore," because "it says something true about the anxieties and experiences of the people who believe and repeat it, even if it says nothing true about the objects of the theory itself." Perhaps the rich and powerful are not giant space lizards in disguise (as noted kook David Icke -- not covered in this book -- claims), but they do seem to treat the rest of us with a coldblooded detachment that's rather reptilian, so the theory has its resonance. For this and other reasons, Walker states, "I'm not out to espouse or debunk any particular conspiracy theories," but rather to tease out what they reveal about our collective psyche.

This is a tricky brief because, as Walker himself admits, some conspiracy theories -- such as the activities of the FBI's COINTELPRO program to investigate "anti-American" groups in the 1960s and '70s -- are documented, while some of the undocumented ones are more credible than others. "It would be absurd," he writes, "to deny that conspiracies can be real ... The world is filled with plots both petty and grand, though never as enormous as the ancient cabals described in the most baroque conspiracy literature."

This book is part Greatest Hits -- you find discussions of JFK, Watergate, the Freemasons, birthers and the Satanic ritual abuse panic of the 1980s -- and a few lesser-known oddities, like a subculture that believes "certain digital time displays, particularly 11:11, might be messages from another planet." For the connoisseur, an entire chapter on John Todd -- a lecturer on the evangelical circuit during the late 1970s who revealed the "secrets" of the vast witchcraft-practicing conspiracy from which he'd defected -- offers a delicious farrago of crackpotiana. According to Todd, the Illuminati (aka the Council of Foreign Relations, aka the Rothschild family) had everything from Standard Oil to the John Birch Society to the ACLU dancing from its puppet strings. Ayn Rand, a mistress of Philippe Rothschild, wrote, at his order, a novel, "Atlas Shrugged," which was mostly read by "Communists." The Denny's logo is really the symbol for the "eightfold path of what a witch must master to be a powerful witch" and Elton John "has never written a song that was not written in witch language." Also, Todd claimed to have personally seen a copy of the Necronomicon -- which was, in case you didn't know, an inspiration for the Book of Mormon (the religious text, not the Broadway musical).

Some of the most piquant chapters in the book chronicle the many ironic conspiracies devised in the postwar years, from a faith called Discordianism, invented by a couple of high school pals who "shared an affection for crackpots, a distaste for religion and a fondness for pranks," to Robert Anton Wilson's "Illuminatus!" trilogy and the Church of the SubGenius, as well as other satirical or semi-satirical tricksters who frolicked through the pages of the alternative press during the 1960s and '70s. These wags planted bogus "clues" and sent letters to outfits like the Christian Anti-Communist Crusade, professing to be the Illuminati and admitting, "We've taken over the Rock Music business." The hoaxers were astonished at and chastened by how readily their mischief was incorporated into existing conspiracy theories. Even when the parodic element was recognized, believers viewed it as a clever disguise for the truth.

Then some of the pranksters succumbed to paranoid fantasies themselves, like Kerry Thornley, a co-inventor of Discordianism, and even, temporarily, Paul Krassner, editor of the counterculture magazine the Realist. Krassner, who called himself an "investigative satirist," fell down a rabbit hole when his research into the Church of Scientology brought him under the sway of Mae Brussell, a California woman who thought virtually every aspect of modern life was part of a government plot to discredit the New Left. He started to think he was being followed and clicked out SOS messages on his ballpoint pen. "I had wanted to expose the dangers of Scientology," the astute Krassner wrote later, "but instead I joined a cult of conspiracy ... I thought that what I published was so important that I wanted to be persecuted, in order to validate the work. In the process, I became attached to conspiracy."

As Walker sees it, our brains are predisposed to see patterns in random data and to apply stories to explain them, which is why conspiracy theory can be so contagious. Although conspiracies do exist, we need to be vigilant against our propensity to find them whether they are there or not. The most sensible outlook would appear to be that of Robert Anton Wilson, who concluded that "powerful people" could well be "engaged in criminal plots" but who found it unlikely that "the conspirators were capable of carrying out those plots competently." Or, I would add, of covering them up effectively. It's the ineptness of human beings in executing elaborate schemes and then shutting up about it afterward that makes me skeptical of almost all conspiracy theories. Besides, if the U.S. government was masterful enough to engineer the 9/11 attacks, why couldn't it also plant some WMD in Iraq?

But there I go, again, debunking. The problem with trying to interpret conspiracy theories as folklore or mythic archetype, without weighing in on their real-world veracity, is that veracity is at the very core of conspiracy theory. Apart from wags like Wilson, the main thing its adherents most care about is the status of their beliefs as fact. Conspiracy theory is an argument about how the world really is. It can only tell us "something true about the anxieties and experiences of the people who believe and repeat it" if it is an invention of their minds and emotions instead. That I believe there's a LensCrafters on the northeast corner of the intersection of Sixth Avenue and West 13th Street in Manhattan reveals little about my anxieties or experiences (beyond my experience of walking past it a lot) because there really is a LensCrafters there. That's just a fact.

On the other hand, my beliefs about the racism and militancy of the American militia groups of the 1990s were, until I read "United States of Paranoia," largely colored by what Walker believes to be the paranoid biases of law enforcement, government and the press. Facts can shift that. I didn't know about the many connections between those groups and black nationalist and hip-hop figures who shared the militias' opposition to "globalism, federal power and paramilitary policing." I didn't know that nearly half of the Branch Davidians killed in the Waco siege of 1993 were people of color. I didn't know that authorities were alerted to the violent plans or racist doings of several right-wing fringe outfits by militias who found out about them and thought they ought to be stopped.

We'll never stop quarreling over the blizzards of facts deployed by conspiracy theorists, but Walker has succeeded in proving at least one thing: We've all got a little paranoia in us. Even me.