When scripted shows like "The Newsroom" take on real-life news, the results are hit-or-miss 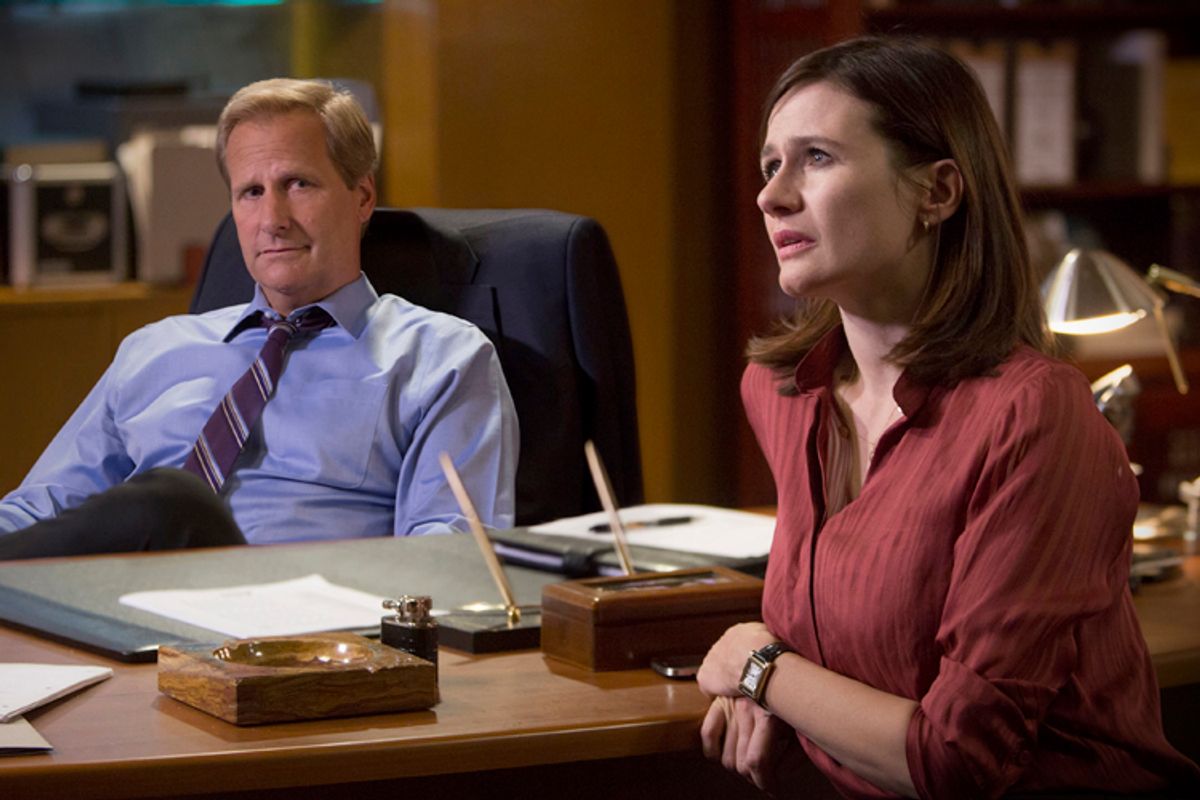 Jeff Daniels and Emily Mortimer in "The Newsroom" (HBO)
--

Though it may be the most brazen in appropriating real-world tragedy, "The Newsroom" isn't the only show to depict real-world events.

This season, Aaron Sorkin's cable-news drama has depicted characters' responses to Occupy Wall Street and the presidential campaign of Mitt Romney. To complain about it seems, in a way, not sporting -- the very nature of the show depends upon showing how the idealized cable news anchors and producers would respond to news events, to compare them against real-life news coverage. One may not like it, but that's the DNA of the show, just as "ripping stories from the headlines" is part of the DNA of "Law & Order."

Something far weirder -- and, often, more incisive -- happens when shows not explicitly about the news take on hot-button issues. The series below have established fictional worlds that run parallel to our own, worlds in which real-world news doesn't always permeate (unlike "The Newsroom" universe, which has all the same news as ours). So when it does, it's both distracting and revelatory.

"The West Wing," "Isaac and Ishmael"

The characters of "The West Wing" generally responded entirely to fake news -- the threatening Middle Eastern nation on the series, for instance, was Qumar rather than, say, Iraq or Syria. This episode, written and filmed quickly after the events of Sept. 11, 2001, aired on Oct. 3 of that year. Occurring outside the show's timeline, the episode used the show's then-popular characters to explain the origins of, and to decry, anti-Muslim prejudice in America as a group of students interrogate the White House staff during a lockdown. The students "ask Josh very leading questions that demonstrate they are angry at Arabs, but also weirdly logical and calculated in exposing the double standards of Josh and members of the White House staff," according to a mixed review on the A.V. Club that praised the series' attempt to take on an incendiary issue with an incredibly short turnaround time; it was the Aaron Sorkin trick of didacticism in service of a greater goal, but the events and the rhetorical style were abandoned by the next episode, when season 3's reassuring, made-up plotlines returned.

"Sex and the City," "Anchors Away"

The first episode filmed after the attacks of Sept. 11 was a love letter to New York even more than most episodes; Carrie turns down a man, for instance, because he says he doesn't like New York, the city she calls "her boyfriend." She also urges the rest of the clique to "throw some much-needed money downtown" and calls Samantha's lover "manthrax." Without explicitly acknowledging Sept.11, the show had its realest moments in its entire run elucidating exactly what, in New York, had changed. (Compare it against the suddenly-popular-again "Friends," which, set in New York, trundled blithely and merrily along in the months and years after 2001.)

Earlier this year, "Glee" -- which had previously addressed hot-button but fairly generic topics like homophobia and bullying -- directly addressed gun violence in schools a scant few months after the shootings at Sandy Hook Elementary. The gun was brought to school by a student "afraid of the real world," though not a deranged shooter, and its accidental discharge was non-fatal. As the Atlantic Wire wrote of the episode, which had all the emotional charge of a school shooting while keeping all characters safe: "This is "Glee"'s frequent M.O., to run up alongside a serious issue but never actually make contact with it, to peel off at the very last minute back into the safe and cozy and toothless world that Ryan Murphy has created. I'm not saying that we needed to see carnage in the hallways to drive home a point about school shootings, but if there ultimately wasn't going to be a point, then, well, what was the point of doing the episode at all?"

"Will & Grace," "The Definition of Marriage"

"Will & Grace," by its eighth season, was something of a victim of its own success: If the show was able to change people's minds about gay rights to the degree Joe Biden has claimed, it was also not at all novel. A show that had made waves in its first few seasons for merely depicting a gay man at all had come in for criticism for depicting Will as fairly sexless. After gay marriage had become, over the  course of the show's run, a sudden hot topic, Will married Taye Diggs in a rare departure from the show's usual screwball/celebrity-driven/completely random plotlines. The show couldn't quite ignore the rising tide of gay rights, though in a sign of the times, the wedding was for a green card, not entirely for love.

Much like "The Newsroom" this season -- whose use of war-torn Uganda has seemed to a degree exploitative -- "ER" made use of the ongoing humanitarian crisis in Africa as a plotline; in "The Newsroom," it's one among many newsy topics, but "ER" tended to hew more closely to the strictly medical (or to flights of fancy like a tornado hitting the hospital) than to something one might have read about in the newspaper. "We turned some attention on the Congo and on Darfur when nobody else was," executive producer John Wells told MSNBC. "We had a bigger audience than a nightly newscast will ever see, making 25 to 30 million people aware of what was going on in Africa." Striking the balance between newsy and entertaining is difficult -- but even though "ER" moved toward telling a real-world story of a continent in crisis fairly late in its run, it went on for five more seasons after the jaunt to Africa. The news doesn't always have to be a drag.