"Bob's Burgers" is the most sex-positive show on TV

It's a cartoon, but don't be fooled -- this show has a lot to say about accepting people's sexual quirks 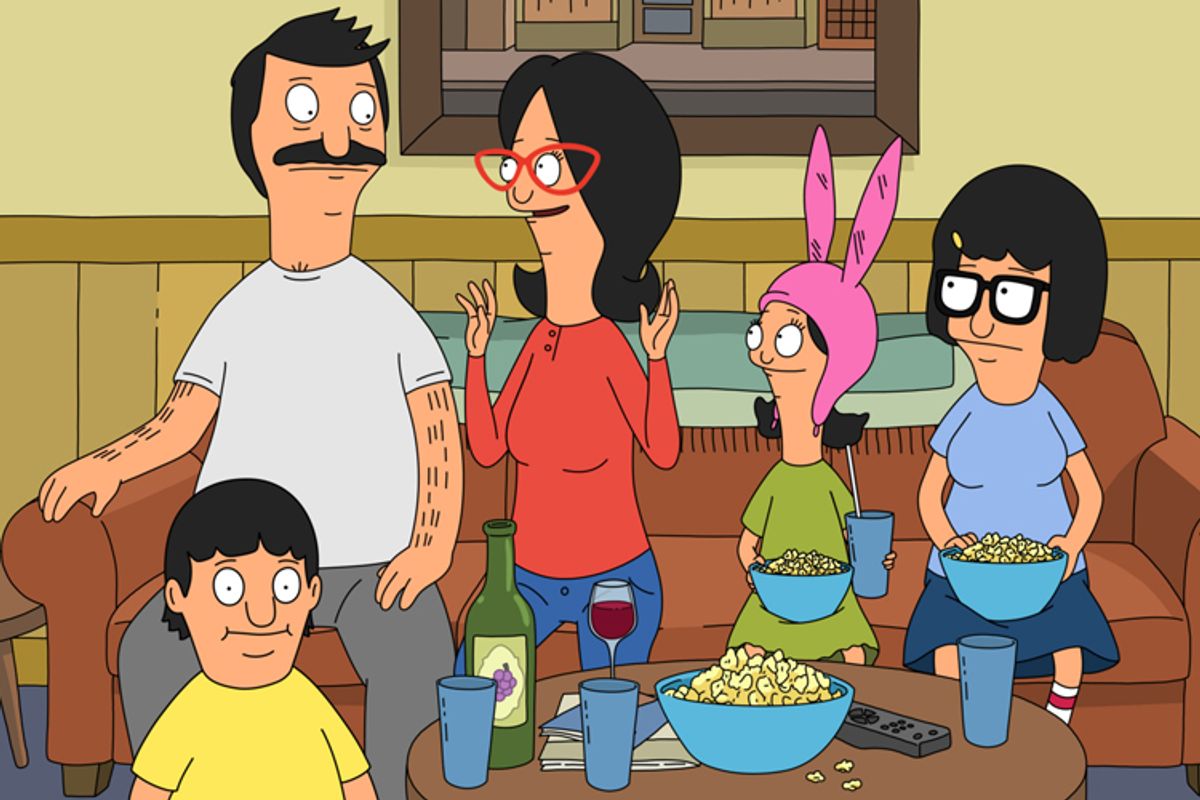 If you’ve never seen "Bob’s Burgers," the particulars alone might keep you from tuning in when its fourth season begins on Aug. 25. It’s an animated show on Fox, for starters, sandwiched between banality ("Family Guy") and toothlessness ("The Simpsons"), and the notion of a half-hour comedy based on the antics of a nuclear family is far from cutting edge. There’s a short-tempered but harmless father — check — a loving and indulgent mother — check — and three kids, one of whom is endearingly simple, one who mostly plays the straight man, and one whose manic and precocious energy precipitates many an adventure. (Check, check, check.) The show is ostensibly about the Belcher family’s struggles to raise their children while running a business that turns a slim profit. But underneath the unremarkable exterior beats one of the most fiercely liberal hearts steering any show on television today. "Bob’s Burgers" is a Trojan horse full of sexual progressivism and radical acceptance for trans prostitutes, hell-raising bikers, geriatric swingers and awkward adolescent girls. If given the chance, it will subvert your expectations at every turn.

That includes exceptions of how many “laughs” a comedy should contain. It’s exceedingly rare for "Bob’s Burgers" to move its audience into belly-aching, gasping-for-breath territory. While the writing is witty, intelligent and original, you may not LOL at all in the course of a single episode. (Light chuckling is usually my response.) There’s a gentleness to "Bob’s" humor, even when dealing with anuses  and street workers. And in a climate where so many jokes hinge on cruelty and propping up existing power structures (see: the rape joke debate, the bigoted rants of Michael Richards and Tracy Morgan, the proud racism of the Jeselnik Offensive) a punch line that doesn’t go for the “outrageous” or “offensive” almost makes one do a double take. Every line here is crafted with loving attention to do service to the actor who utters it; all the characters are richly realized and treated with respect, both by the writers and those who provide the voices. And all characters are sincerely weird, eccentric in a way that somehow maintains a semblance of believability.

Take Mr. Fishoedor, the hamburger joint’s mellow, eye-patch-wearing landlord, whose funniest quality is his inability to discern or care about how children should be treated. “I think all kids like bullets,” he confirms to a gun-happy old flame in one typically confident moment. And his response to finding the kids running a casino underneath Bob's restaurant is sheer delight: "Looks like you're in trouble ... because I'm a gambling man!" Then there’s Gene, the music-loving only son who is shameless, perpetually positive, and embraces most of his siblings’ suggestions with minimal resistance. When Louise, the wild youngest child, tells Bob “it’s time to focus on your good daughter — Gene,” Gene obligingly replies, “I’m pretty!” (In a later episode, he briefly daydreams of posing nude while another man sketches him, à la "Titanic.") He happily pees in the sink, can entertain himself for hours with a tambourine, and doesn’t bat an eyelash when his mother shares a dream she had about breast-feeding him again, only he had a long white beard. (“That should be our next Christmas card,” he says.)

The sweet expressions of the Belchers’ boundless love for their children are one of the many reasons to keep watching. Bob sometimes can’t help himself from revealing his discomfort or confusion with a family member's behavior, but there’s a theme of acceptance running throughout the show that dissolves almost any character’s initial judgment. And while Bob's wife, Linda, occasionally lays down mom-law, her default mode is one of relentless affirmation. Of Gene’s Queen Latifah Halloween outfit she enthuses, “So specific and political, I love it,” after she praises Tina for being a mummy. (“Sexy!”) In anticipation of receiving her first kiss, Tina tells the family, “When I kiss Jimmy Jr., you’ll all be kissing him with me.” “I’m first,” literal-minded Gene says, not wanting sloppy seconds. “I’ll go last, I’m fine with that,” Linda says, adorably. She’s the most lovable mom on TV.

Ultimately what makes "Bob’s Burgers" so special is its conviction that most people are good, most problems are minor, and other folks' weirdness can be taken in stride. Gene's mild gender play, for instance, is a source of comedy but never mocked, just as Tina's burgeoning sexuality is funny, but never pathologized or minimized. The two older children are undoubtedly experiencing the first pangs of sexual awakening as opposed to some type of puppy love or platonic attachment; "my pants feel funny!" Gene says when he encounters a voluptuous female ventriloquist's dummy (who happens to be a manatee). Tina's wish to be kissed by her crush at her birthday party is taken up as a cause by her entire family, not treated as a shameful or disconcerting desire. And when Bob discovers that his father-in-law has a balloon fetish, he does his best to remain supportive and helpful, and encourages his father-in-law to share his turn-on with his wife. In other words, sexual urges are regarded as harmless quirks as opposed to opportunities for punishment or humiliation. There’s nothing new about the standard, feel-good ending to most half-hour comedies, where all conflicts are resolved and all non-villain participants are satisfied.  But the tender, live-and-let-live nonchalance guiding the silliness of "Bob’s Burgers" makes it a welcome addition to a tired formula.