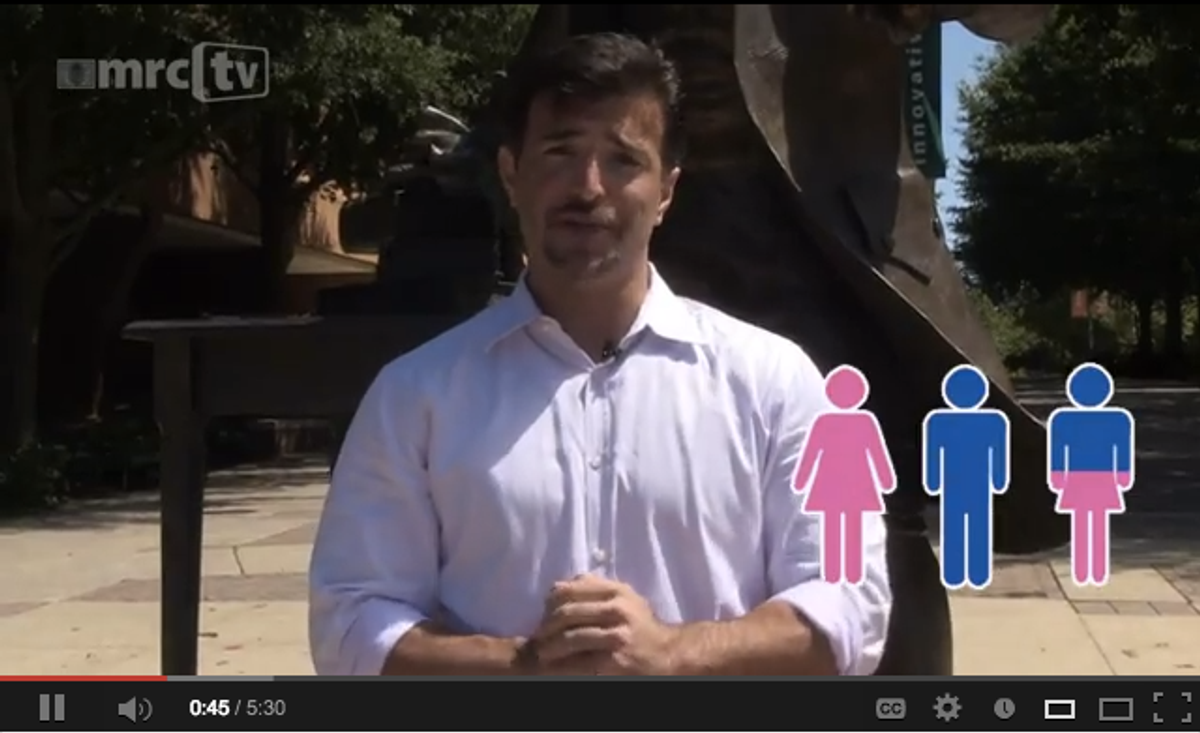 The conservative Media Research Center responded to news of a California law that allows transgender youth to use school facilities and play on athletic teams that correspond to their gender identity with a blatantly transphobic video that equates transgender people with sexual predators.

In the video, reporter Dan Joseph "poses" as transgender (by affecting a slightly feminine voice) and asks a woman if she would be comfortable with him sharing the bathroom with her by saying, "I'm a transgender. So that means I have the man parts but inside I feel more like a woman. I was just wondering, is it okay if I go in there with you in there and change and shower and stuff?"

The video then cuts to a series of interviews in which Joseph indicates that the new California law will somehow lead people to openly expose their genitals in public restrooms or allow predatory men to spy on women while they are changing.

Joseph's hateful framing is a perfect representation of how willfully ignorant (and openly hostile) conservative media outlets are to transgender rights, as National Center for Transgender Equality executive director Mara Keisling remarked to Raw Story on Monday: “[The people at MRC] know that there are real trans people. They know we’re not talking about boys who want to pretend that they’re girls or girls who want to pretend they’re boys. They know we’re talking about people who have a gender identity that want to safely use the restroom in a way which is the least disruptive.”

Beyond grossly misrepresenting the content of the law and the experiences of transgender people, Joseph's video serves to "villainize a group of kids who have it really rough, and who the state of California’s just trying to make it a little easier on,” Keisling continued. “This [law] doesn’t put anybody else out. It’s really easy to scare people about it ... nobody’s put out, nobody’s made unsafe, nobody’s made unmodest [by this law]."

You can watch Joseph's video here: