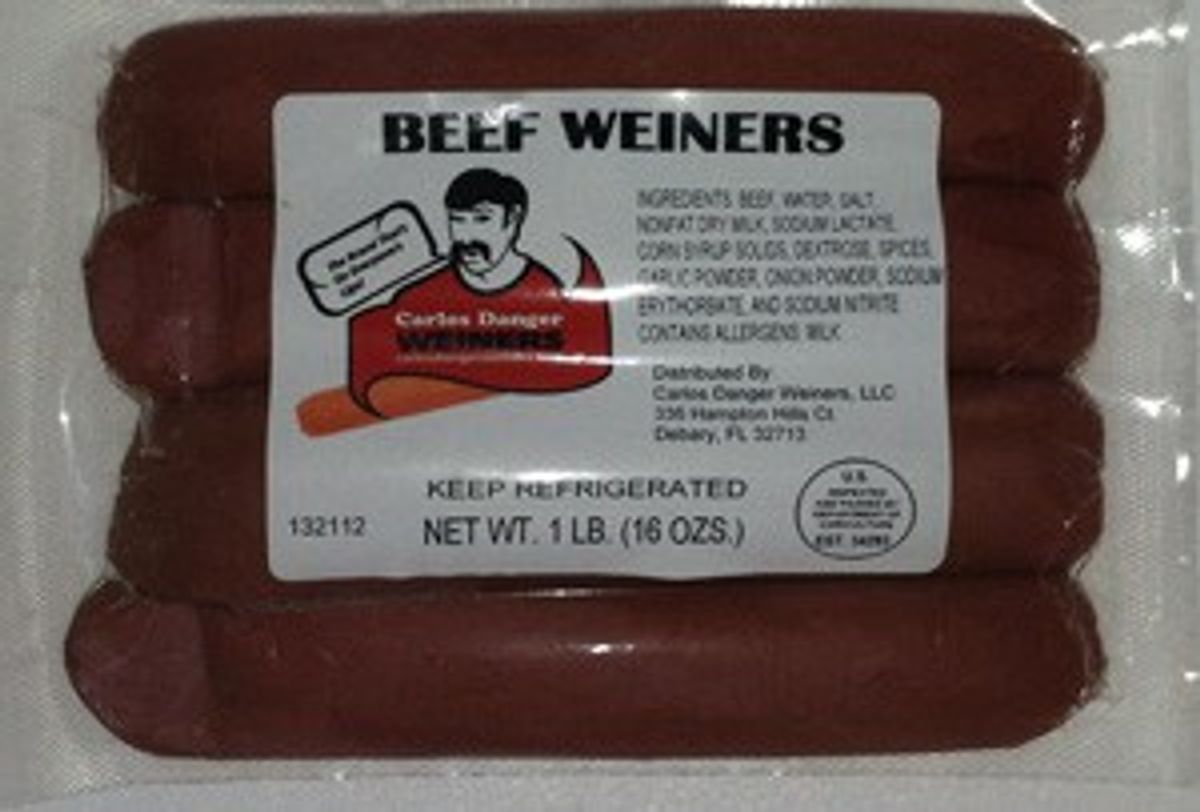 When news of Carlos Danger's sexploits first burst forth on the scene, the Internet rubbed its hands in glee, ready to generate any number of jokes and memes about Anthony Weiner's cartoon-like alter ego.

The latest to give the New York mayor hopeful a good grilling, so to speak, is Randall Richards, marketing executive and brainparent of the "extra large" Carlos Danger Weiner that "rises to any occasion."

"There's a lot of excitement about it and we think they're going to fly off the shelves," says Richards. "I mean how many times do you introduce a new product that has this much press going for it?"

Indeed, since the website went live on Friday, Richards has received close to 5,000 pre-orders of the well-girthed Danger Weiner, which contains a full quarter-pound of beef and weighs twice the size of a regular hotdog.

Pricing starts at just $4, but Richards says he's sold many more of the $80, "Super Tailgater Packs," which comes with 40 Weiners and a side order of adhesive mustaches and beer koozies.

While Sydney Leathers, Weiner's 23-year-old online paramour, may not have relished her sexting partner's goofy pseudonym (uh — pot, kettle …), Richards was all too keen to pick up on the handle, swiftly turning a jocular scheme dreamed up at a drinking session with friends three weeks ago into a marketing reality.

"I just felt instinctively that it would work," says Richards, who is hopeful about the long-term stay of his product. "We think eventually people will probably forget how they came to like it in the first place, and it just becomes a permanent brand.

Richards is currently in serious talks with major food retailers such as Wal-Mart and Publix to distribute the product nationally in the coming weeks, and is also set to appear on a number of major talk shows in full Carlos Danger costume, alongside two "Weiner Girls" who'll provide assistance for live studio cookouts.

A recent poll indicates that Weiner continues to make an unsavory impression on New York voters since the sexting incident, now dropping into fourth place behind Bill DeBlasio, Christine Quinn and Bill Thompson in the Democratic nomination.

Richards is not the first media-saavy marketer coming forward to cash in on the fallout of "Weinergate." Last week, Instagrammers tweeted pictures of a "Carlos Danger Food Truck" they spotted cruising through the laneways of Lower Manhattan.

According to CNN, members of a creative branding agency manning the truck were offering free hotdogs to anyone who tweeted to @anthonyweiner, but warned: "Just don't send him a picture," because "you might get one back."