No, "The Butler" is not "Forrest Gump"

Lee Daniels' film is conservative at heart, but that doesn't make it the same as the overwhelmingly white "Gump" 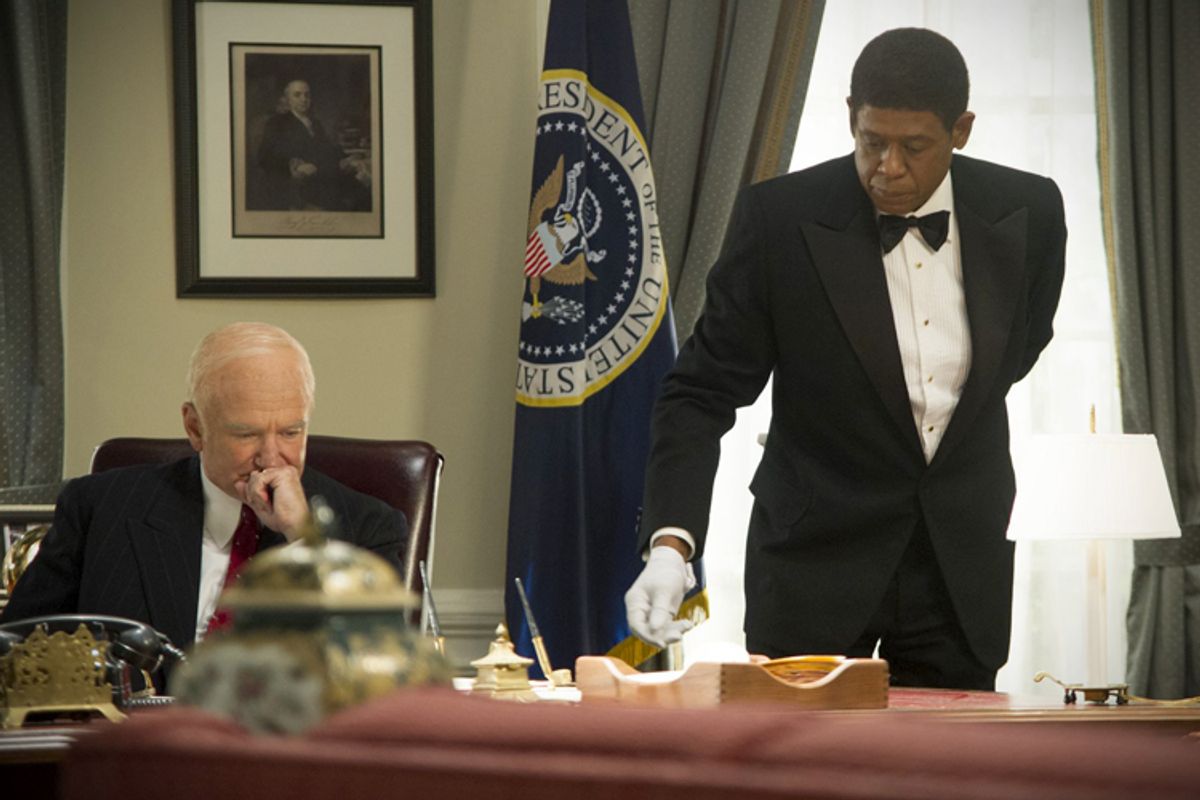 This article originally appeared on We Are Respectable Negroes.

"Lee Daniels' The Butler" is a serviceable film with inspired moments. And as noted by many critics, the stunt-casting of the various presidents Forest Whitaker's version of longtime White House butler Mr. Eugene Allen (named Cecil Gaines in the movie) encounters throughout the decades is a distraction. Lee Daniels' heart is in the right place; "The Butler" is a bloated mess where its broad themes are more admirable and noteworthy than any of its particulars.

"The Butler" does offer up some positives. It is one of the few major movies in recent years where the focus is primarily on the African-American actors. Moreover, it is especially noteworthy that we can have a "black film" that does not descend into the coonery and buffoonery of Tyler Perry and others' take on new age race minstrelsy. The dignity and difficulties faced by the black men who work at the White House as staff, trained to be "invisible men," is deftly channeled by the panoply of actors involved.

Given their shared narrative format (broad historical arcs and over-simplication of history), it is tempting to compare "The Butler" to "Forrest Gump." Such a move is superficial. "Forrest Gump" is a movie about a white man who is an unknowing part of history, is present at major events, but is ultimately not responsible for anything. Forrest Gump the character represents the innocence of whiteness as something ahistorical and without the burdens of either history of historical memory (except for all the "feel good" innocence of American exceptionalism).

In all, Forrest Gump, both the movie and the character, is about how whiteness, and white folks in mass who are either unwilling or in denial about white privilege and racism as foundational forces in American and modern history, would like to imagine themselves.

"The Butler" is very conscious of history and its connections to the present. Cecil Gaines is "us"; Cecil Gaines is the black viewer, our kin, community and extended family. White folks are not reduced to spectators, per se: they are are validated by a feel-good story of how much "their America" has changed for the better and the means through which powerful white elites ultimately do "the right thing" in terms of civil rights.

"Forrest Gump" is an exercise in rejecting and evading historical responsibility. "The Butler" is a meditation on black respectability and the many connections between small acts of day-to-day resistance by regular folks such as maids, butlers, Pullman car porters, etc., titans like Dr. King, and a black freedom struggle, which resulted in the election of Barack Obama.

"The Butler" and "Forrest Gump" do share some political and thematic similarities. For example, they both mock and caricature the black power movement. "The Butler," through news sound bites, Nixon's meeting about Cointelpro, and Cecil's son's involvement with the Black Panthers depicts them as a violent group of clowns who are the bastard children of the "good" civil rights movement led by Dr. King.

This is a flattening of history that ignores the overlap between different elements in the black freedom struggle. It is also inaccurate to depict the Black Panthers as a type of violent organization populated by blaxsploitation versions of black radicalism. The white racial frame and consensus racial liberalism need to misrepresent black nationalism as a means of cementing their sense of triumph and legitimacy in post-civil rights America. "The Butler" does that political work quite effectively.

As a very "white" film, "Forrest Gump" takes a complementary approach. Gump's love interest, "Jenny" the "white fallen woman" character, takes up with a similarly cartoon-like "black radical" group who rape and sexually exploit her until Forrest saves her from their evil "black beast rapist" machinations. He then makes a "good woman" out of her, rehabilitating her character as they re-create the white nuclear family at the end of the movie.

"Lee Daniels' The Butler" is extremely conservative politically and fits solidly within the post-civil rights America Hollywood race relations project. Cecil Gaines is a legitimation of the (black) Horatio Alger myth. If you work hard, suffer and be quiet, then you too can change your part of the world and find success in America. The message: Blacks and other people of color should not be disruptive or radical. Work within the system, and if you are patient, then the American creed -- because the United States is the best country on Earth -- will reward you as it corrects its defects over time.

There are white racist villains in America - -most of them in the South, of course. There are also good benevolent white people, such as the various presidents of the United States, who will do the right thing by black and brown folks if given the time. And, of course, the cult of Saint Ronald Reagan -- who was a states' rights-supporting racist who used the Southern Strategy and the image of the black "welfare queen" to win elections -- has to be reinforced and perpetuated at every opportunity.

Students of black politics will find much to discuss and debate about "The Butler." Cecil Gaines' son's transition from the liberal integrationism of Dr. King and mainline civil rights, to his joining the black power movement, to eventually becoming involved in establishment "urban" Democratic politics, is a metaphor and example of the challenges, shortcomings and successes of black political mobilization and incorporation over the decades.

Louis Gaines' development, the tension with his father, and Nixon's discussion of how to demobilize black radicals through targeted outreach and patronage, complements the thesis and claims made by Cedric Johnson in his book "From Revolutionaries to Race Leader."

"The Butler" also has a nice wink and "Easter egg" for students of black politics when Oprah Winfrey's character looks through her son's possessions and discovers Manning Marables' book "Race, Reform, and Rebellion."

Dr. Marable recently passed away. It would be nice to believe that Lee Daniels wanted to include Marable's book as an acknowledgment of his role as one of the senior scholars in the study of African-American politics and history.

"The Butler" is a near perfect film for the Age of Obama. It meditates on the complexities of black respectability, black pride and black (apparent) submission and deference to the white gaze. "The Butler" clearly depicts how black confidence and dignity were traits to be punished by white supremacist violence.

"The Butler" then offers a corrective to this history though the acts of quiet resistance and quiet revolution that were made by men such as Eugene Allen.

In "The Butler," American history comes full circle with a black servant to white presidents meeting the country's first African-American president. Of course, there is no mention of the vitriolic white racism that Obama's election has inspired from the white right and the Tea Party GOP in "The Butler." The ending of the film will not allow it.

Instead, "The Butler" gives audience members of every racial background something to celebrate. American exceptionalism is once again reinforced through racial catharsis and healing. Black folks can go from the lynching tree (one of the first scenes of "The Butler") to the White House. History is a tapestry of lies and truths; together they do political work through popular culture. "The Butler" is one more example of that phenomenon in practice.