Grunwald vs. Greenwald: Who's the "activist" journalist, now?

A "mainstream" reporter calls for the murder of a public figure, but somehow his "journalist" bona fides are intact 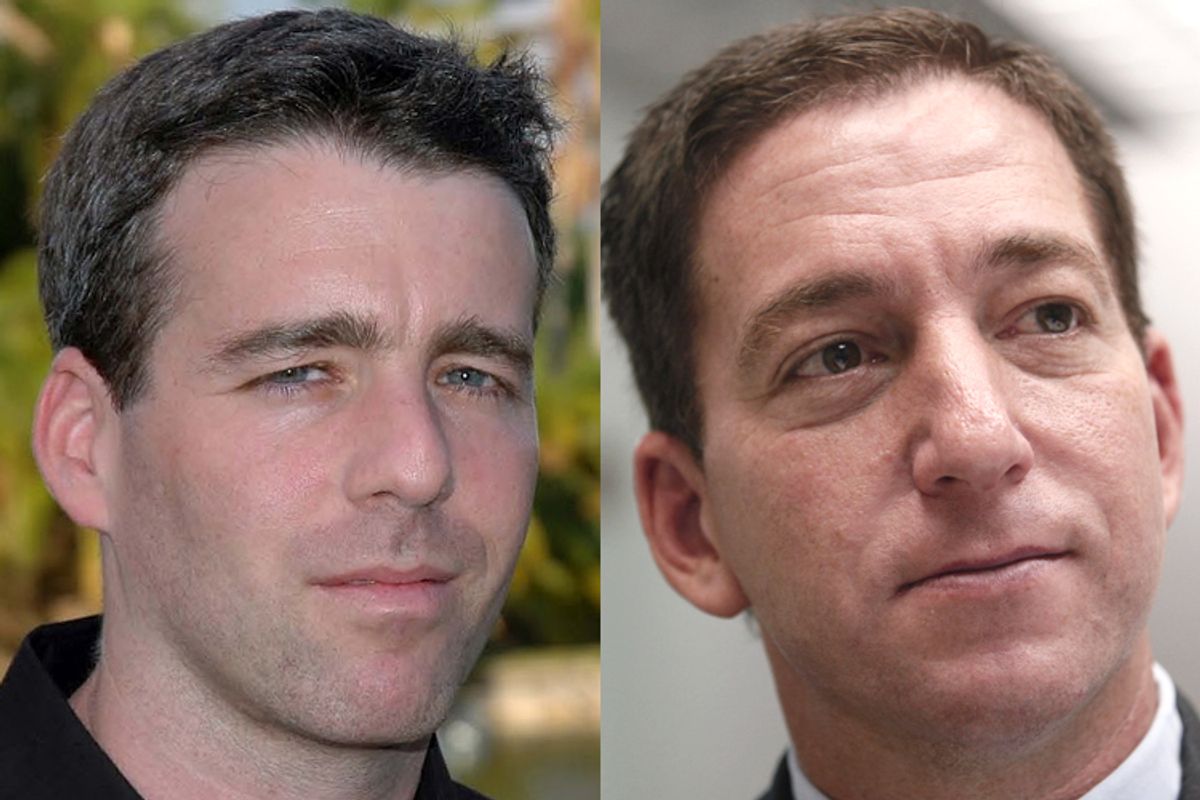 This past Saturday, Time magazine's senior national correspondent, Michael Grunwald, told his 10,000-plus Twitter followers that he "can't wait to write a defense of the drone strike that takes out Julian Assange." There is, to say the least, much to be gleaned by such a statement.

For instance, it is yet more proof of the growing ranks of Journalists Against Journalism Club. Yes, here we have a reporter expressing excitement at the prospect of the government executing the publisher of information that became the basis for some of the most important journalism in the last decade.

Likewise, it is yet more proof that the nonchalant blood lust that pervades the National Security State also exists inside the establishment media that is supposed to be objectively covering that National Security State. Indeed, even after deleting his tweet, Grunwald was unrepentant about such blood lust, saying that he wasn't sorry for effectively endorsing extrajudicial assassination, but merely for the fact that his tweet "gives Assange supporters a nice safe persecution complex to hide in."

But, then, journalists hating on journalism and political reporters worshiping state-sponsored violence is no big reveal anymore. In that sense, Grunwald's morbid fantasy is notable primarily because it summarized such realities in such uncharacteristically clear terms.

What is more revelatory is what the context of the Grunwald episode says about the intensifying debate over who is and who is not a true "journalist,"  and whether it is opinion or ideology that really disqualifies one from the legal privileges that are supposed to come with that label.

The journalist/non-journalist is a debate that has gone on for a while now. It is one that I have a bit of personal experience with since a 2007 fight when the gatekeepers in the congressional press gallery tried to deny me press credentials simply because I acknowledge my own political opinions/ideology. And it is a debate that has now flared back up since opinionated Guardian columnist Glenn Greenwald began breaking the NSA stories back in June.

In response to Greenwald's scoops, the most pro-establishment media voices have insinuated that because Greenwald has previously stated opinions on issues like government secrecy, militarism and surveillance, he should be treated as something less than a journalist -- or even as a full-on criminal.

For example, disgraced Wall Street investor-turned-pundit Steve Rattner took to national television to declare that "Glenn Greenwald is not a journalist, he's an activist portraying himself as a journalist." Likewise, Carl Bernstein said of Greenwald that a "reporter has no business making" a "non-reportorial statement." The New York Times' Andrew Ross Sorkin called for Greenwald's arrest (he later apologized). And most famously, NBC's David Gregory accused Greenwald of having "aided and abetted Snowden," wondered "why shouldn’t you ... be charged with a crime?" and explained it all by later classifying Greenwald as "somebody who claims that he’s a journalist" but might not be one because he has an opinion.

Contrast all that with the reaction -- or lack thereof -- to Grunwald. While there were certainly condemnations of what the Time reporter specifically said about Assange, and while Time's editors said that Grundwald's sentiment is "in no way representative of Time's views," few have cited Grunwald's decision to publicly promote his opinion as proof that, to echo the words of Rattner, he "is not a journalist, he's an activist portraying himself as a journalist." Revealingly, the same "opinions mean he isn't a journalist" attacks leveled against Greenwald were not aimed at Grunwald even though the tweet was not Grunwald's first time expressing highly polarizing opinions. Remember, under the decidedly not objective headline "the government must protect the public even if it has to limit individual rights," Grunwald recently published a screed calling civil libertarians "purists" and berating the ACLU for "shrieking about the FBI violating (a) suspect’s Miranda rights."

Grunwald is hardly the first person who gets to at once express subjective opinions and yet also retain the status of objective journalist, with all the legal protections that is supposed to engender (more on that in a second). The Times' Sorkin, for instance, publishes Wall Street hagiography that is apparently sponsored by Goldman Sachs that is laden with his obsequious opinions (see his essay today defending financial industry cronyism), and few question his status as a journalist.

Likewise, the Washington Post's David Broder was a hard-edged ideologue who regularly published polarizing diatribes, but he simultaneously appeared on TV and in the pages of the Post as an objective journalist -- and nobody tried to strip the so-called dean of the Washington press corps of his journalism credentials.

Same thing for the Post's Bob Woodward; few if any challenged his "journalist" label even after he used the sequestration standoff to slam the idea of budget cuts to the military. Same thing for the likes of Jeffrey Goldberg and Tom Friedman; their clear opinions do not get them chastised by their fellow media mavens as non-journalists.

So which is it? Does having an opinion disqualify one from being a journalist? Or can you have an opinion and still retain the coveted "journalist" status and protections?

The answer today clearly depends on the kind of opinion, and whether it serves or challenges those in power. That's right, just as ideology now determines who gets labeled a prosecutable leaker (sources whose disclosures embarrass the government) and who doesn't (sources whose disclosures help the government), so too does that kind of ideological distinction determine who gets treated like a journalist and who does not.

WikiLeaks and Greenwald hold pro-transparency opinions. Because those kind of opinions do not serve the corporate and government establishment, those establishments work to marginalize them by treating them and those connected to them as non-journalists, activists or -- most recently in the case of Greenwald's spouse -- as terrorism suspects.

By contrast, Grunwald has saber-rattling opinions that proudly support the government's drone strikes and surveillance. Sorkin's opinions promote Wall Street's interests. Broder had opinions that supported, among other things, the government's corporate-serving "free" trade agenda. Woodward has opinions backing an ever-bigger Pentagon budget that enriches defense contractors. Goldberg promotes the Military-Industrial Complex's generally pro-war opinions. Friedman is all of them combined, promoting both "free" trade and "suck on this" militarism. Because these voices loyally promote the unstated assumptions that serve the power structure and that dominate American politics, all of their particular opinions aren't even typically portrayed as opinions; they are usually portrayed as noncontroversial objectivity. And because their opinions support the government and corporate establishment, those promoting them get to keep their journalism credentials -- and all the attendant protections.

Those protections, of course, are what transform this fight over who is a journalist from an abstract academic debate into a legal battle with real-world consequences. That's because the rhetorical fight is happening at the very moment when the government is trying to reduce protections by specifically limiting the "journalist" classification.

Consider how the legal wrangling in the Bradley Manning case shows a government that is trying to narrow the definition of journalist on ideological grounds. In that case, prosecutors specifically argued that WikiLeaks is not a "journalistic enterprise" because it is an opinionated "transparency movement" (as if the two are mutually exclusive), and that the latter distinction supposedly means Manning committed worse crimes than had he leaked to, say, the allegedly non-opinionated Washington Post. Such legal arguments are being floated, mind you, at the same time the Department of Justice is simultaneously attempting to limit the definition of "journalist" so that the most ideologically adversarial and opinionated news outlets and reporters are stripped of the legal protections often necessary to conduct journalism.

What the Grunwald episode highlights, though, is that highly subjective opinions are as ubiquitous in traditional media outlets like Time magazine as they are in "alternative" media outlets, only the former never have their journalism credentials challenged. Juxtaposed with the government and media establishment's harsh treatment of Greenwald and WikiLeaks, the episode thus also shows that journalism privilege (status, legal protections, etc.) is increasingly granted not exclusively to those who lack opinions, but only to those whose opinions pass those establishments' ideological litmus tests.