Starving artist sells Detroit, one statue at a time 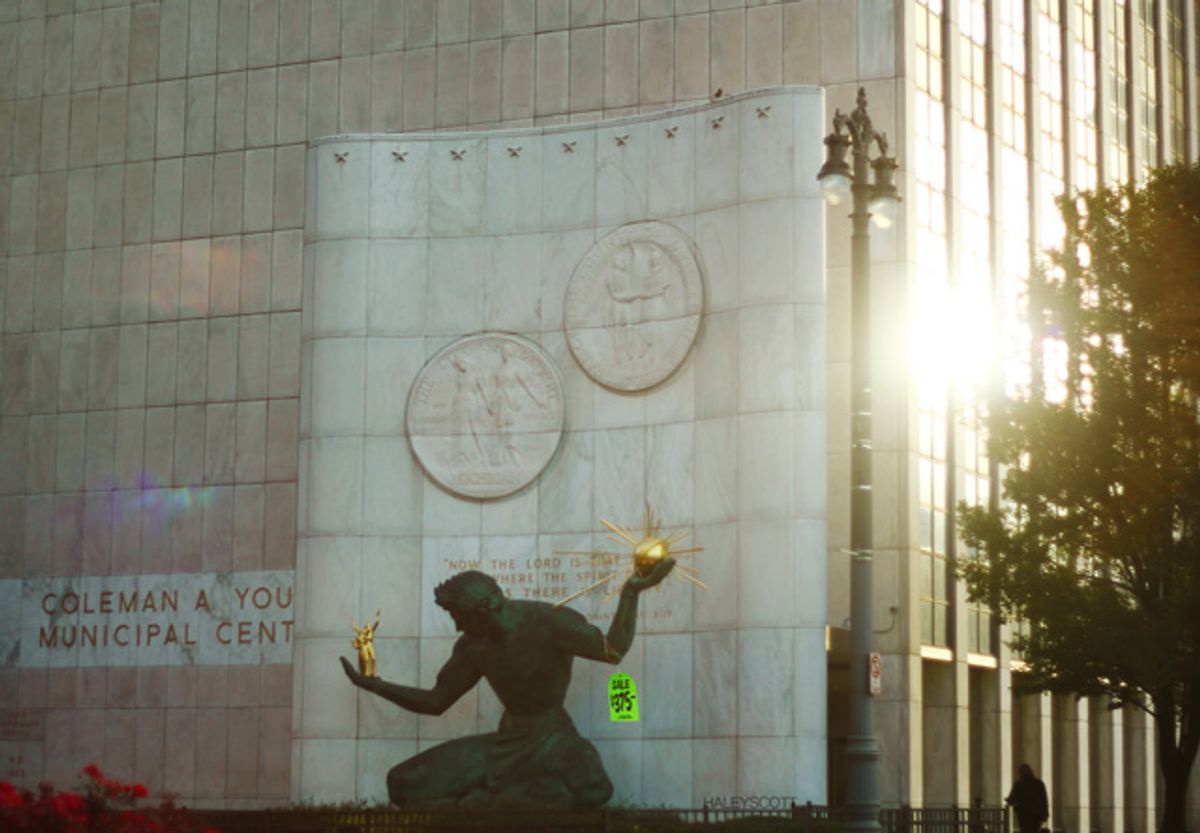 Marshall Fredericks’s “The Spirit of Detroit” statue, on sale for $375 (Haley Scott)
--

Not long ago, artist Jerry Vile placed a giant Crisco can in front of the “Monument to Joe Louis,” a giant sculpture of a fist in downtown Detroit, as a lewd but hilarious and spot-on commentary on the city’s bankruptcy. Local media glommed onto the stunt immediately: it was a welcome break from the gloomy shroud of news that’s settled over the Motor City. This was “The Selling of Detroit,” as Vile called it. Accordingly, the tags included the phrase “Motor City Going Out of Business Sale,” which is also the headline for an ad that Vile and a friend took out in the local Metro Times. Catchy and flashy like a page of the Penny Saver, the ad proclaims “Largest Inventory of Abandoned Property on the Planet!” in a bright yellow bubble; it offers a “fully equipped mayor’s office!” and a “starving artist sale!” (of works from the DIA). Everything from stop signs to police chief uniforms are offered for “CHEAP!” It would seem over the top, if the city’s water works weren’t actually on the bankruptcy chopping block. “The Selling of Detroit” is satire, but it may also prove prescient. “Everything in Detroit is up for grabs, from Belle Isle to the DIA’s collection — our culture,” Vile told Hyperallergic by email. “Kind of like the Old West, even the water rights could be on the table. So it is pretty obvious. Satire is fun, but it also can be powerful, it can resonate. I have no idea what motivates me, unless you draw a line and tell me not to cross over it. I do like to make people laugh, but I love to piss them off. When you can do both, the gods smile.”

Vile explained that if he had done these projects earlier, before serious issues like pensions and cultural heritage were on the table, it might have been easier to write them off as stunts. But now the situation has taken on an urgency. “Personally I think the message is too dire and situation is too sad to call the pieces I did a prank,” he wrote. “It’s like an op-ed piece.”

Returning to those raunchy endeavors, while he was planning Detroit’s going-out-of-business sale, Vile also decided to auction off the enormous Crisco can on eBay. “The Crisco can is a fine piece of pop art all by itself,” Vile said, adding, “(well it was made on the cheap).” Forty-six bids later, it sold for $1,300, all of which will go to a local charity. Vile originally offered the piece as a donation to the city, but for some reason that we can’t understand, they didn’t want it.