The new Obama dog is great

And I don't care who knows it 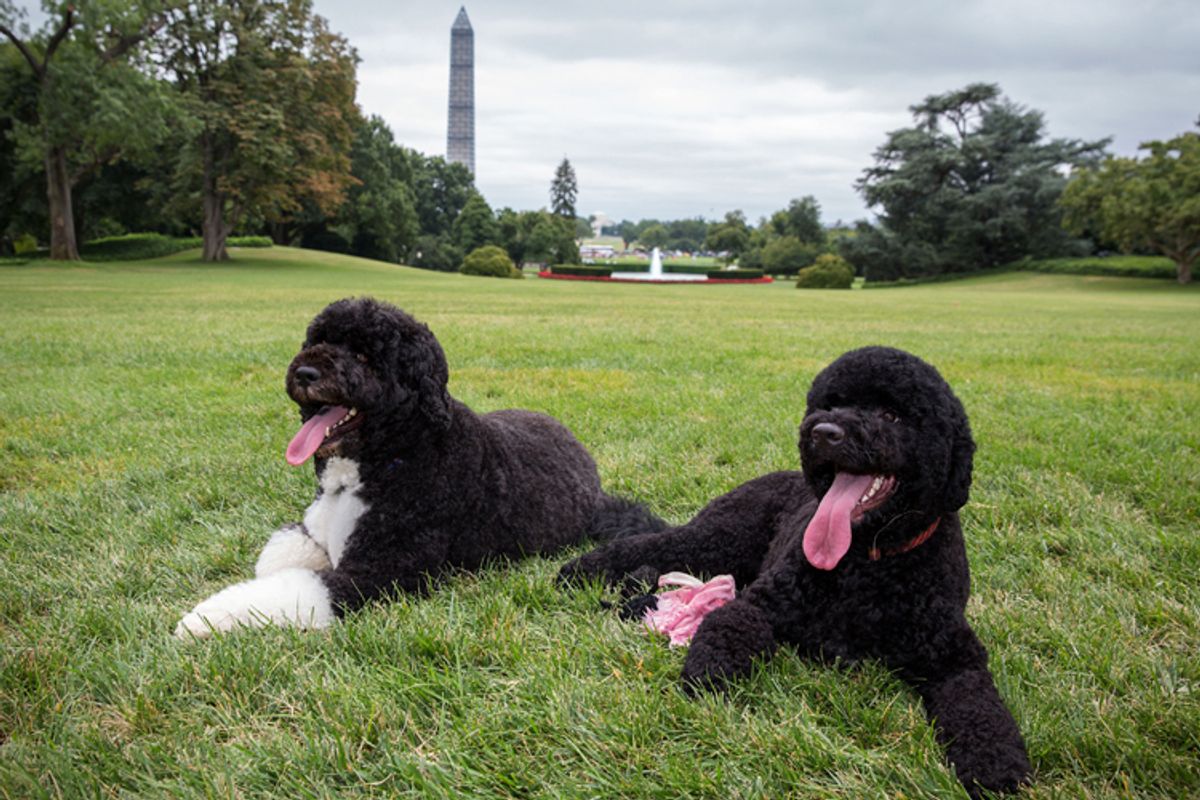 The White House announced yesterday that the Obamas got a new dog -- another Portuguese Water Dog, named Sunny -- and everyone was super cynical about it. So many jokes about the NSA and how the puppy is just a distraction from all the terrible news lately. Even Justin Amash weighed in. I say enough. It's a cute famous dog. There is nothing wrong with cute famous dogs. America loves cute famous dogs.

It's not the dog's fault that the United States built a massive surveillance apparatus that it cannot bring itself to effectively oversee and restrain. Sunny was born last June! Unlike numerous congressional critics of the NSA, she wasn't even alive when the FISA Amendments were reauthorized. Sunny is not responsible for raids on medicinal marijuana dispensaries or prosecutions of national security whistle-blowers. She's just a puppy.

Just like it's not the fault of the dog from "The Artist" that that movie was a charming diversion but by no means a remotely great film, it is not Sunny's fault that the American government is complicit in repressive violence across the globe and consistently guilty of putting its immediate economic and "security" interests before its supposed support for liberty and self-determination.

Because most successful politicians seem barely human by the time they reach the office of the presidency, it is all too easy to imagine the adoption of a puppy as a sort of cynical public relations ploy, dreamed up by people referred to as "operatives," done only after extensive research and poll analysis. You know, like "Wag the Dog," with an actual dog. But I refuse to be cynical about the adoption of an adorable puppy by the president, or anyone else.

Look, the Clinton presidency was a mess. Dick Morris was there. Larry Summers was setting up the eventual destruction of the world economy. Bill Clinton was triangulating and "ending welfare as we know it" and having dumb scandals and inventing "V-Chips" and signing DOMA. But let us never forget that they also had one of the cutest pets in modern presidential history: Socks the Cat. The cat that was kind of in a Super Nintendo game. Look at how cute this motherfucker was.

The least worst thing a president can do is get a cute animal. Do you know what the best thing the Bush administration did? Probably the AIDS stuff but a close second is the Barney the dog Christmas videos. Those were great. Nixon had three dogs while he was president (Checkers was his vice presidential dog) and they are the only proof we have that he was a human man and not an animate ball of resentment and paranoia. Have you even seen LBJ's mutt? (Like Socks, LBJ's Yuki made it to the White House because the president's daughter just found the dog one day and decided to keep it. That is the best way to end up with a White House pet, and if I have to fault the Obamas for something here, it's adopting fancy dogs instead of just letting Sasha or Malia bring home some weird stray they find.)

So yes, sure, announcing the adoption of a new dog with a Tumblr gif can seem sort of infantilizing or pandering but if I got a cute dog I would definitely take a bunch of pictures and send them to all my friends and probably put some up on Twitter, so who can fault the White House, really? Dogs are great, even when they belong to presidents.