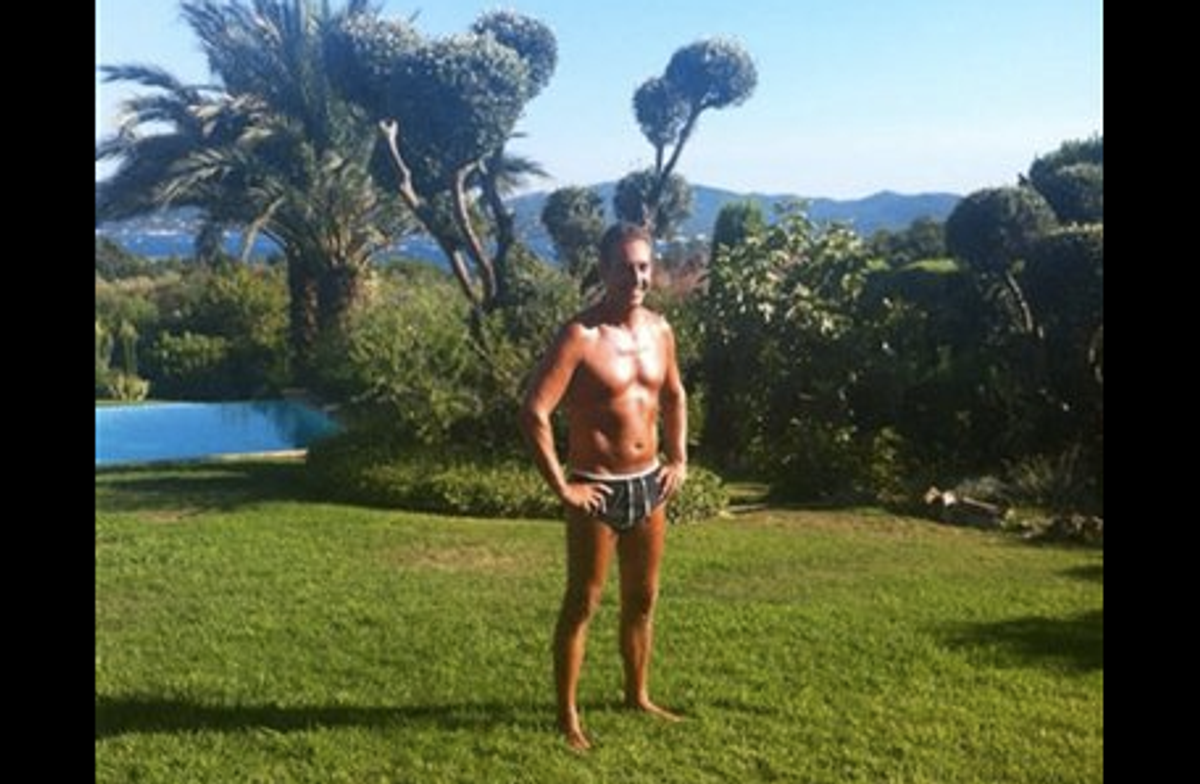 In this undated photo provided by the Austrian Freedom Party (FPOE) via Facebook, the party's head Heinz-Christian Strache poses in his bathing suit at an unknown location. As the campaign for Austrian general elections enters its grueling final phase, two high-profile contenders have gone beyond rolling up their shirt sleeves: They’ve taken off their shirts. Posing bare-chested is the newest twist on the rivalry between populist candidate Frank Stronach and Heinz-Christian Strache, who heads the anti-immigrant and EU-skeptic Freedom Party, as the two compete for the protest vote ahead of the Sept. 29 elections. (AP Photo/Austrian Freedom Party via Facebook)
--

Borrowing a page from Russian President Vladimir Putin's playbook, the beefcake displays are the latest twist in the rivalry between populist candidate Frank Stronach and Heinz-Christian Strache, head of the anti-immigrant and EU-skeptic Freedom Party.

The two are both seeking the protest vote in Austria's Sept. 29 election.

On a continent where mainstream electioneering is normally a staid affair, Stronach was first to doff his shirt. Wearing jeans and a smile, he revealed a trim 80-year-old upper body as he stood next to his private lake during weekend interviews with Austrian dailies.

"I don't need to be ashamed of my body," the Austro-Canadian billionaire explained.

A photo of the tanned and athletic 42-year-old clad in swimming trunks appeared Sunday on his Facebook page, with the caption "top fit in the election campaign!"

The bare-chest battle went into round two on Monday, with Austria's major newspapers carrying both photos — along with articles debating whether such displays constituted below-the-belt campaigning. The photos reappeared Tuesday.

Commenting on the "naked duel," the tabloid Oesterreich praised Stronach for "showing the new self-confidence of the generation '60 plus.' In politics. In fitness. In looks." At the same time, it warned that Strache's decision to challenge Stronach's gambit "with his fitness-center muscles" now risks turning the campaign into a circus.

It aims for the same voters that Strache's Freedom Party views as its own — Austrians disenchanted with both the conservative People's Party and the Socialists, parties that now form the government coalition. While differing on some issues, both Stronach's and Strache's parties are campaigning on the need for change.

Strache's party regularly polled third with support close to 30 percent before the billionaire entered the fray, but the Freedom Party leader now says he will be happy with 20 percent of the vote next month.

Experts are still debating on whether the show of skin will help or hurt the two men but Austria's other parties are content for now to flex only their political muscles.

Andreas Schieder, a leading Socialist official, urged both men to focus on the politics of "naked facts, instead of naked upper bodies."