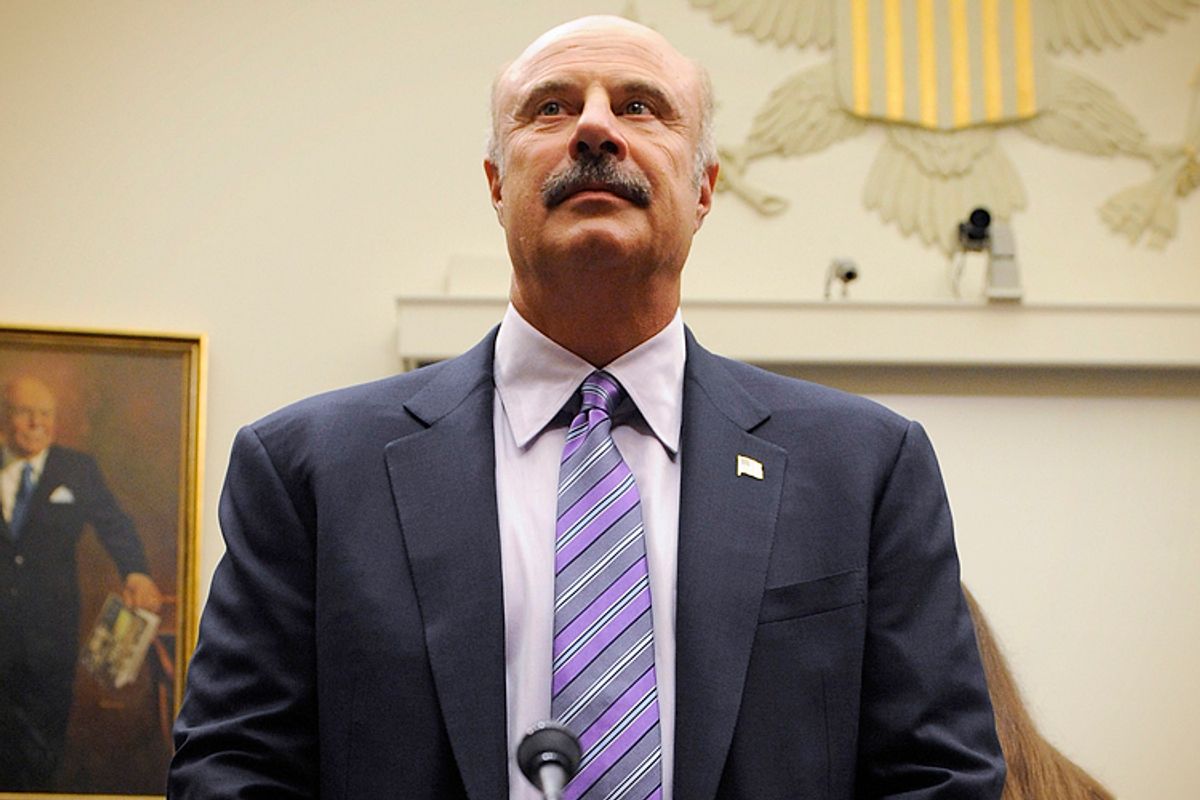 The initial reaction of many people upon reading Dr. Phil's now-deleted tweet about drunk sex was outrage. I had a different first thought: This is a conversation we really need to have.

In case you've missed this Twitter tempest, a recap: Yesterday afternoon, Dr. Phil McGraw's account sent out the following message: "If a girl is drunk, is it OK to have sex with her? Reply yes or no to @drphil #teensaccused." The tweet promptly garnered enraged responses and a Change.org petition, and it was deleted shortly thereafter. A spokesperson for McGraw came out this morning to defend the 140-word bombshell, by explaining that it "was intended to evoke discussion leading into a very serious show topic." It remains to be seen what that show will cover, but I happen to agree that this is a "very serious" topic and one worthy of discussion.

Now, do not get me wrong. The wording of the tweet was horrendous. “Girl” suggests a female who is underage, which introduces its own issues. Additionally, the included hashtag, #teensaccused, suggests that we are potentially talking about minors. It is difficult enough to talk about alcohol and sex when it comes to adults, let alone when it comes to minors who may or may not be legally capable of consenting to sex, sober or not. You would first have to start with the question of whether it’s OK for minors to have sex in the first place -- and whether by “OK” you mean legal or moral or wise.

In the wake of the Steubenville rape case -- in which a young woman was assaulted while incapacitated -- it is particularly irresponsible to ask such a question without specifying what kind of drunk we’re talking about. Do we mean a drunk person who is dancing unself-consciously to Gangnam Style or a drunk person who is unconscious? These details matter, and they make for entirely different questions.

The report “Prosecuting Alcohol-Facilitated Sexual Assault” by the American Prosecutors Research Institute -- which is fascinating and depressing, in equal measure -- explains, “There is not a bright-line test for showing that the victim was too intoxicated to consent, thereby distinguishing sexual assault from drunken sex.” Jurisdictions define alcohol-related rape differently. Some states vaguely outlaw “having intercourse with a person who is too intoxicated to consent,” says the report. Others get more specific: “Rape occurs when the defendant has sexual intercourse with a person who is ‘mentally incapacitated,’ which is generally defined as being rendered temporarily incapable of appraising his or her conduct” -- and “mentally incapable of resisting” -- “due to the influence of a narcotic, anesthetic, or other substance.” Some jurisdictions consider it rape “when the defendant has intercourse with someone who is ‘physically helpless.’”

But that is just to consider the question of whether sex with a drunk person is legally OK. “Although intercourse with someone who is too intoxicated to consent always constitutes moral rape," explains the paper, "it is only a crime if it meets the legal definition of rape." What we care most about is the moral aspect and I suspect, or at least hope, it was that question of right or wrong that Dr. Phil's tweet was trying to address.

People legitimately have a lot of questions about what is right behavior in this realm: Is it always wrong to have sex with an intoxicated person? Is it OK to have sex with your significant other when they're drunk? Does it matter if you’ve already had sober sex or not? Does previous sober sexual consent with a partner change the standards under which consent can be meaningfully offered? Must one discuss consent before that first beer touches your lips? Does enthusiastic consent count if your partner is also enthusiastically drunk? What if you’re both drunk? How does gender play into our perception of the perpetrator in mutually inebriated situations? What if one of you is slightly drunker than the other? What blood alcohol level invalidates consent? How drunk is too drunk?

It is scary asking these questions, because we don’t want to give predators any wiggle room. After all, rapists will exploit the supposed gray areas to excuse their assaults. A rapist will offer the explanation that “we were both so drunk, neither of us knew what we were doing.” So we say: Wrong is wrong, rape is rape -- and that is true! But I think reasonable people can also agree that the mere presence of alcohol does not invalidate consent -- such an extreme position is disturbingly paternalistic. Maybe sometimes it is “OK” to have sex with a drunk person and sometimes it is not. These are things that we should absolutely be able to discuss -- but Twitter is not the right medium. That is where Dr. Phil first went wrong.