Meet the hatchet men of Cairo

A goon squad is used by Egyptian authorities to threaten anyone they think is anti-Egypt. But who exactly are they? 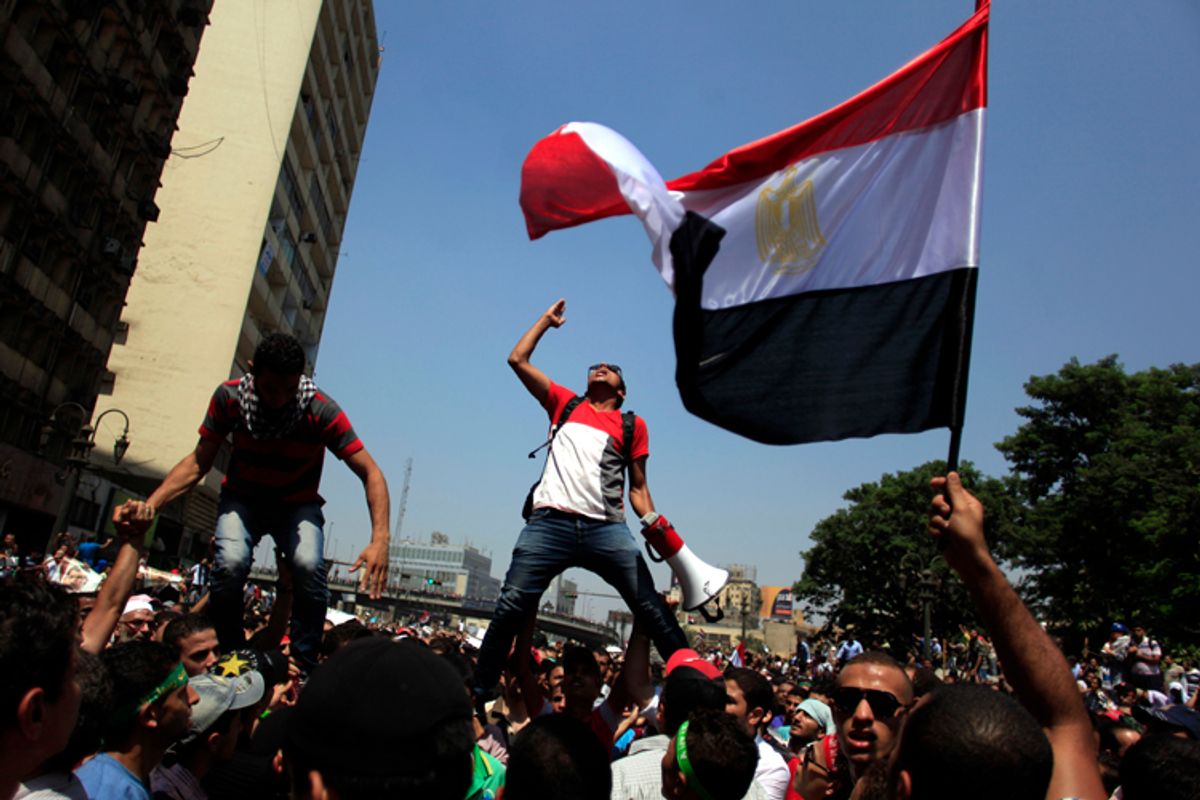 CAIRO — One of the prime dangers and obstacles to journalists and human rights observers trying to monitor and report on the violence in Egypt is the resurgence of vigilante groups threatening and harassing anyone they think is anti-Egypt. These days that means anyone who speaks critically about the bloody crackdown on the Muslim Brotherhood or is somehow viewed as a supporter of the ousted president, Mohammed Morsi, who ruled for a year.

Hardly a day passes without reports of a journalist being beaten or detained, or a rights activist being marched off to a police station by “honest citizens,” as the state media calls them. While carrying out their “civic duties,” these vigilantes somehow find time to steal mobile phones, cameras and money from their victims.

So who is doing this informal work of protecting Egypt from its supposed enemies? In some cases, it appears that the chore is carried out by “popular committees,” especially aggressive neighborhood watch-type groups formed ostensibly to protect homes and buildings from what they claim are marauding Morsi supporters. Yet, from appearances and descriptions of the vigilante beatings and detentions, actions of some supposed popular committees resemble activities of what Egyptians call "baltageya" (often translated as “thugs”) – people who for decades have served as a kind of auxiliary goon squad for Egyptian authorities.

On Sunday, Egypt’s Interior Ministry, which runs the police, announced a ban on the popular committees. In its statement, the ministry said the committees, which are generally pro-army, are being “exploited by others to conduct acts against the law.” Maybe they are in fact high-spirited patriots on a spree. But there are alternative possibilities, given recent history.

Baltageya in league with police were prominent in trying to intimidate pro-democracy protesters during the years of low-level dissent leading up to the massive Tahrir Square demonstrations that brought an end to Hosni Mubarak’s 30-year rule in February 2011, and they have surfaced regularly during Egypt’s political turmoil ever since.

The original meaning of the word "baltagi" (the singular) is “he who carries an ax,” effectively, hatchet men. Professional baltageya have worked closely with security forces since at least the rule of President Anwar Sadat in the 1970s. During the Mubarak era, Egyptians sometimes referred to them as the “20-pounders,” meaning they would do police bidding for 20 Egyptian pounds, at the time maybe the equivalent of three or four U.S. dollars. Police would ferry them in buses to help smash small demonstrations organized by the Kifaya movement, a pro-democracy group that openly opposed Mubarak’s rule during the mid-2000s. After finishing their handiwork, you could see them on the sidewalk eating free macaroni and lentil lunches provided by the cops.

I had my first direct contact with them during a demonstration on May 26, 2005, on the marble steps of the Journalists Syndicate downtown. The steps were a kind of free-speech zone usually off-limits to police. On that day as the demonstrators shouted “down with Mubarak!” police formed a human wall in front of the staircase. Then they parted like the Red Sea to permit the hatchet men to enter past a barricade and attack.

(The melee was especially notable because that day the baltageya targeted women among the demonstrators, punching and kicking them, pulling their hair and groping them. They ripped the blouses of two women. Police and their commanders stood by passively.)

I ran into them again on Feb. 3, 2011, when I was interviewing Tahrir protest supporters —victims of vigilantes on the street-- at the Hisham Mubarak Law Center, an independent anti-torture and legal aid organization. Police under the command of an army major general raided the place. Baltageya played the role of shock troops and entered with clubs, smashed the office windows, rifled desks and shelves, and screamed and yelled.

Later, when soldiers escorted two dozen other people, including me, out of the office into the street for what turned out to be a 36-hour detention, a mob greeted us at the exit, made threatening and obscene gestures, and rocked the red bus into which we were herded.

The post-Mubarak military employed civilian mobs to break up demonstrations. It turned out the Brotherhood had its own claque of hatchet men, not hired from outside but within its own ranks. On Dec. 5 and 6, 2012, members of the Brotherhood and its Freedom and Justice Party rounded up and beat 49 demonstrators from an anti-Morsi protest sit-in in front of the Ettihadiya presidential palace, and videotaped  their “confessions.”  In a speech after the incident, Morsi said the confessions were evidence that the protesters were — what else? — “hired thugs.”

Figuring out just who the baltageya are has long been a guessing game. Some are simply impoverished men with time on their hands — plentiful in  Egypt -- and a propensity toward violence and willingness to work for police. Cairo is also a city with many poor neighborhoods controlled by local smuggling and drug trade mafias, activities that sometimes leave them beholden to the police to operate freely. In 2011, Hazem Kandil, a scholar at Cambridge University, estimated that during Mubarak’s reign, police informally employed 1.5 million baltageya and informers.

With a keen sense of irony, Egyptian authorities turn the use of baltageya on its head by accusing political opponents of being thugs, sometimes in the service of Zionists, Americans or other “dark hands.” Mubarak officials deemed protesters in Tahrir Square during the 2011 uprising baltageya. During its 17 months in power, Mubarak’s successors in the Supreme Council of the Armed Forces, growing tired of persistent Tahrir demonstrations, stopped calling protesters revolutionaries and started calling them thugs. In his year as elected president, Morsi labeled protesters who called for his ouster “baltageya.” The current military government has upped the ante, labeling the entire Muslim Brotherhood “terrorist.”

This all came to mind when I was observing last Friday’s siege of Fateh Mosque in central Cairo, where a few hundred Morsi supporters were holed up after fleeing the violent crackdown that killed close to 100 people in a sit-in at nearby Ramses Square.

At Fateh Mosque, police and soldiers mixed with men in civilian clothes who occasionally tried to storm the building. When police and soldiers finally evacuated the mosque last Saturday, the plainclothes crowd surged forward to try to hit the detainees with their fists or sticks. They also roughed up a couple of reporters. Somehow, the police, who had cleared Muslim Brotherhood supporters from squares in Cairo and in the process killed more than 600 people last week, couldn’t shoo this crowd away. Were they concerned citizens, freelance baltageya, or instruments of the security forces? Maybe all of the above.

There’s one way to clear up the ambiguity: The ministry should declare the era of official use of baltageya over. Of course, that would require the current authorities to acknowledge that the baltageya have been a resource tool for the police for years.

Unfortunately, I think we’ll be seeing them used for some time to come.

Dan Williams is a senior researcher at Human Rights Watch.