"Modern Dads" is the anti-"Real Housewives" 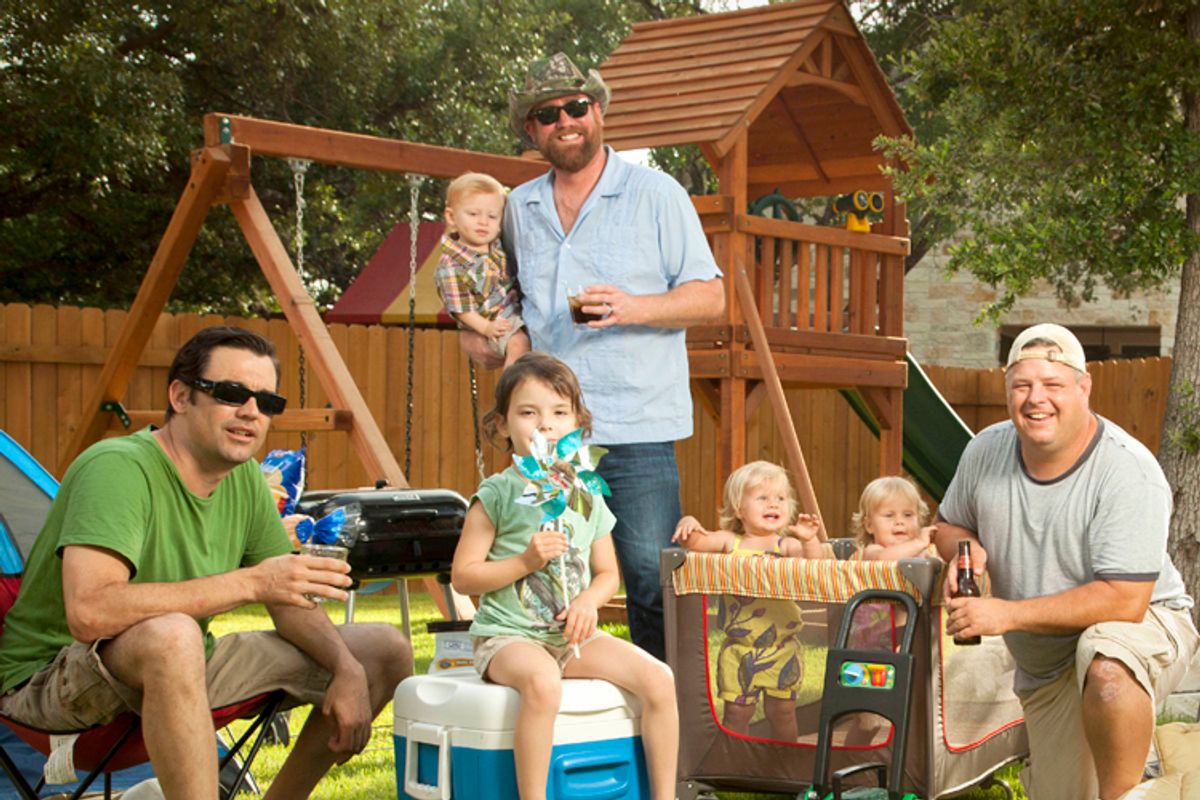 If you've passed a subway, bus or billboard in the past two weeks, it's really easy to write off A&E's “Modern Dads” before it even premieres this Wednesday. Images of a tool belt filled with diapers or babies with diapers duct-taped around them can evoke eye-rolls. At best, the advertisements suggest a show about a bunch of dudes who go out of their way to prove they're macho despite taking care of their kids; at worst, they suggest a bumbling bunch of confused men straight out of 1983's "Mr. Mom." Thankfully, contrary to those ads, “Modern Dads” is neither. While it comes with its fair share of cheesiness, “Modern Dads” is a realistic and humorous depiction of 21st century fatherhood that goes for documentary more than drama.

“Modern Dads” centers on four dads in Austin, Texas: Rick Lucas, the “veteran dad” who has four kids ages 10 to 1; Nathan Hall, the “newbie dad” who is caring for his infant son; Stone Slade, the “single dad” who cares for his 5-year-old daughter while looking for love/lust; and Sean Kent, the “cool stepdad,” who has two stepdaughters ages 8 and 5. While casting into types can feel a little staged for most reality TV shows, the dynamic of different levels of experiences and marital situations works for the series. “It's actually a good combination in my mind for a range on fatherhood,” said Lance Somerfeld, an at-home dad and the founder of NYC Dads Group, which arranges activities for dads and kids.

Somerfeld hasn't seen the series, but he is eager to watch the premiere. “My philosophy is that any representation of at-home dads in mainstream media is positive,” he said. “It moves the conversation forward and makes it become more acceptable in our culture because people see it on prime-time TV, the news, and in films.” Somerfeld speaks to the dearth of stay-at-home dads in popular culture. It is sad that “Modern Dads” even qualifies as an improvement just for showing fathers who are good at taking care of their kids and still manly. But it does.

Television does not have the best track record with dad characters (think Tim Taylor on “Home Improvement" or the lovable but relatively inept Phil Dunfy on “Modern Family”), and its history with stay-at-home dads is even weaker. While recent years have seen an increase in the representations of at-home dads in television, they've been largely depicted as fish out of water or obsessed with maintaining their masculinity. A nice exception was Chris Brinkley (Will Arnett) on “Up All Night,” but he's easy to lose sight of when you think of the four fools on “Guys With Kids,” who seemed a regression from even the motley crew of 1987's "Three Men and a Baby." As Soraya Roberts wrote in the Daily Beast, “Pop culture just doesn't have the balls to give stay-at-home dads balls.” Or for that matter, brains.

The series shines when it showcases dads who are more focused on their families and being themselves than on defying stereotypes. The men are depicted as not merely resigned to being at-home dads, but as actively embracing the roles. As Nathan says of his son, Cormac. “He makes me a much better man. I want him to look up to me.” They take their roles as fathers seriously and proudly, which is one of the things that won over Chris Routly, a stay-at-home dad and popular blogger of the Daddy Doctrines. "You never get the sense that any of them are doing what they do simply because of job loss or unemployment but rather because it's what makes the most sense for their family," he said in an email. "I think that's great."

The show's strength actually isn't in its tenderness, though, but in the natural moments of humor in the men's exchanges with each other. It's hard not to laugh out loud when Nathan refuses to stop his car to let Sean in because he's afraid any pause will wake napping Cormac from his slumber; he only slows it and makes Sean do a running jump.

Nate's anxiety is both funny and relatable, two adjectives rarely used to describe a reality TV show but are often applicable to this one thanks to good casting. The dads have a natural chemistry with each other, and they have thoughtful, but still funny conversations.

One of the main ones in the pilot revolves around Stone’s potential vasectomy. Knowing his penchant for the ladies and his desire not to procreate, the dads encourage him to get one -- with plenty of ribbing about his sex life thrown in. It can border on hokey, but on reality TV, there's something refreshing about seeing a group of friends crack jokes and get along well, rather than stage fights and toss martinis.

And since the show doesn't rely on the typical drama and feuds that are generally the core of the reality genre, “Modern Dads” reveals the genuine silliness and fun of parenting. “Baby wrestling is one of the secret pleasures of fatherhood,” says Rick in a clip for a later episode. As someone who used to time how long her infant brother could sit up (with her father's blessing and stopwatch), I can relate to the delight in finally finding entertainment in a non-verbal, mostly crying baby.

Because “Modern Dads” is best when it shows the dads in their element, the sit-down interviews with the men and their wives are a weak point. Their lines during the interviews are so cheesy they seem like they're being read off cue cards. Rick suggests a Godzilla-themed birthday, saying to the screen that, “The kids did to my sex life what Godzilla did to Tokyo.” Or when Rachel, Sean's girlfriend, takes over a woodworking project from Sean, she says, “He's the best dad in the world, but the only tool he is good with is the one he was born with.” All that's missing is a knowing nod and wink.

Ultimately, though, the more stagey aspects of “Modern Dads” are outweighed by the authenticity and humor of fathers who really are good at taking care of their kids. This makes for a show that is actually entertaining enough, at least for now. Reality shows revolving around stay-at-home moms have been infused with souped-up cattiness and Twitter wars to sustain themselves (“Real Housewives,” I’m looking at you). I’m not sure if “Modern Dads” will be able to maintain a national audience in the long term without that level of drama. But I know I'll keep watching ... at least until I see Rick's babies wrestle.