What does "idealism" mean now?

If hawks like George Bush, Paul Wolfowitz and Susan Rice are called "idealists," what are Bradley Manning and MLK? 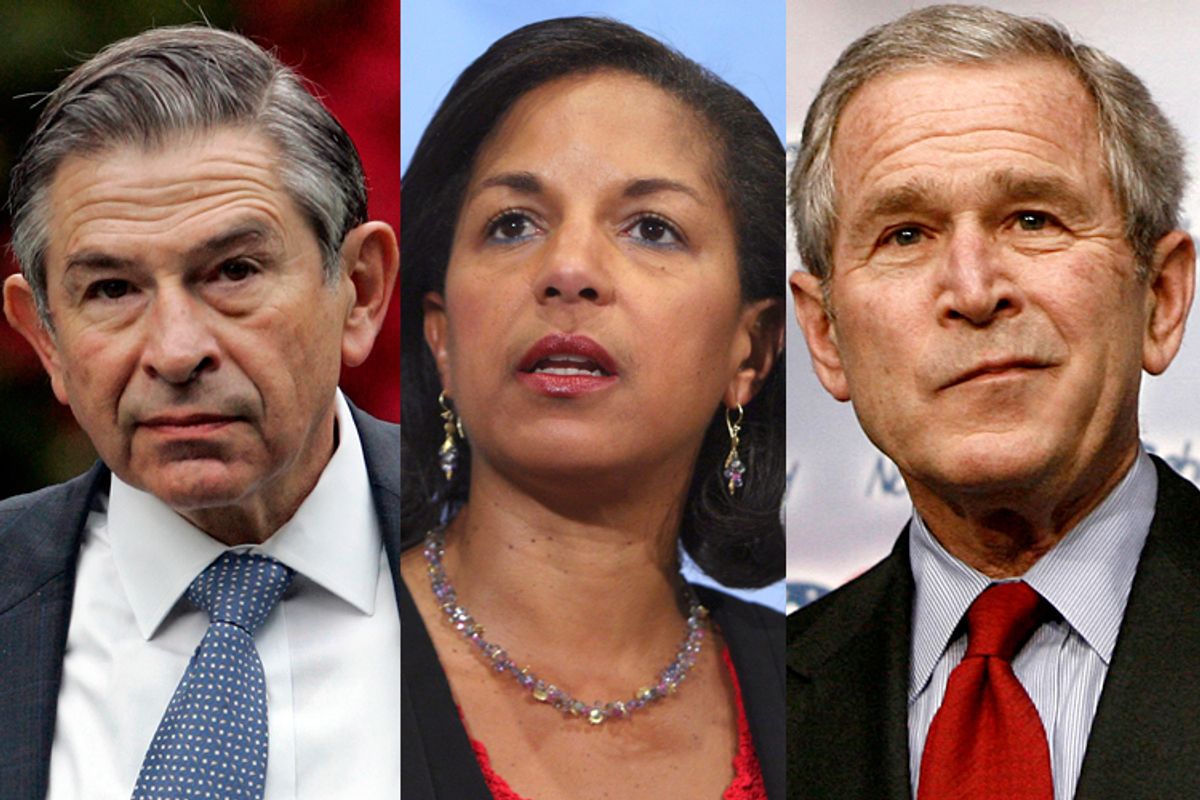 A short-but-gushing profile of Susan Rice appeared in the New York Times this weekend. The piece, written by Mark Landler and titled, "Thrust Into Nonstop Turmoil, an Obama Adviser Counsels Pragmatism," is ostensibly about how Rice, the tortured idealist, has admirably reined in her raving idealistic tendencies in order to strike a more appropriately sober, "pragmatic" approach as ambassador to the United Nations. Advocating caution with respect to the situation in Egypt is presented as only the most recent example of Rice's newfound pragmatism.

This is a classic construct in establishment discourse, particularly when it comes to foreign policy: "idealism" or "pragmatism." On college campuses, it's taught as "liberal internationalism" vs. "realism," but it's essentially the same dichotomy, and that dichotomy is this: there are Good, Noble American officials who want to save everyone, everywhere, and then there are other, no less Good and Noble American officials who are a bit more measured, and (regretfully) resign themselves to the reality that America's power is limited and we should probably just pursue our own interests.

Basically, what elites mean by "idealist" is someone who is very enthusiastic about putting other people's lives at risk all over the world in pursuit of allegedly humanitarian aims, with said aims often being highly dubious, hypocritically conceived, and practically impossible.

Who is an example of a dedicated "idealist" in official Washington? David Ignatius, effectively the government spokesman at the Washington Post, once called Paul Wolfowitz the "idealist in chief" of the Bush administration. Some people might think the unrepentant intellectual architect of a war of aggression that ended the lives of hundreds of thousands of human beings for no reason at all could accurately be described as a sociopath; in Newspeak, he's an "idealist." (Ignatius, of course, describes the attack on Iraq as "the most idealistic war in modern times.")

Wolfowitz isn't even an "idealist" in the ludicrous sense that Ignatius meant it, either (i.e., fanatically opposed to tyranny anywhere and everywhere): he was an enthusiastic supporter of General Suharto, the astonishingly brutal dictator of Indonesia, who slaughtered an untold number of people while receiving crucual U.S. backing and approval. As Reagan's ambassador to Indonesia, Wolfowitz expressed great admiration for the "strong and remarkable leadership" of this genocidal tyrant.

Susan Rice expressed unequivocal support for the attack on Iraq. It quenched her thirst for war - not in the sense that she volunteered to actually participate, of course - that had been building up for many years. This idealist is more than intrigued any time any kind of military violence is proposed. As Benjamin Friedman wrote in a November 2012 piece for U.S. News & World Report, Rice, "has supported just about every proposed U.S. military intervention over the last two decades." Her answer to the humanitarian crisis in Darfur, of course, was to drop bombs there; she defended this proposal by citing the wildly successful bombing campaign in Kosovo. The modern idealist, apparently, argues for bombing people on the grounds that bombing other people went so spectacularly well.

Rice discovered her inner-hawk following the 1994 Rwandan genocide and the U.S.'s failure to do anything to stop it. Is increased support for militarism, though, really the lesson that an "idealist" would take from Rwanda?

And, once again, Rice is not even an idealist on these quite twisted grounds (i.e., wanting to attack and overthrow every dictator on the planet, or stop every humanitarian disaster with military force). She has a sordid and well-documented history of support for horrible African autocrats, and one sincerely doubts that she'll be waging any kind of moral crusade from within the Obama administration against the Saudi Kingdom - the most repressive regime in the Middle East - any time soon (there's that pragmatism again). And, as Ray McGovern pointed out in a December 2012 piece arguing against Rice's potential nomination to secretary of state, her alleged idealism does not, strangely, translate into sympathy for the suffering and oppressed people of Gaza; Rice has "ignored the misery" there for her entire career.

"Idealism" is a great word with an honorable history. Traditionally, the term has invoked thoughts of young college students who want to make the world a better place, or great activists and movement leaders who believed they could achieve the impossible. Bradley Manning represents a perfect example of real, non-Orwellian idealism at work: someone who, at tremendous personal risk, exposed moral horrors that he thought citizens of the world should know about, in the hope that it might bring about enlightenment and change. But Bradley Manning is not representative of elites' conception of idealism. Now, this term is reserved for cheerleaders for death and destruction, like Wolfowitz and Rice.

It's also bestowed on outright war criminals; Tony Blair found himself in awe of George W. Bush's "true idealism." When a single term is employed by a significant number of people to describe both both Bradley Manning and George Bush, both Martin Luther King and Paul Wolfowitz, said term has obviously lost all of its meaning. Maybe the "pragmatic" thing to do would be to just accept the loss of this formerly meaningful and inspirational word.