This cowardly silence is an act of war

The president's refusal to object to David Miranda's U.K. detention speaks volumes in the ongoing war on journalism 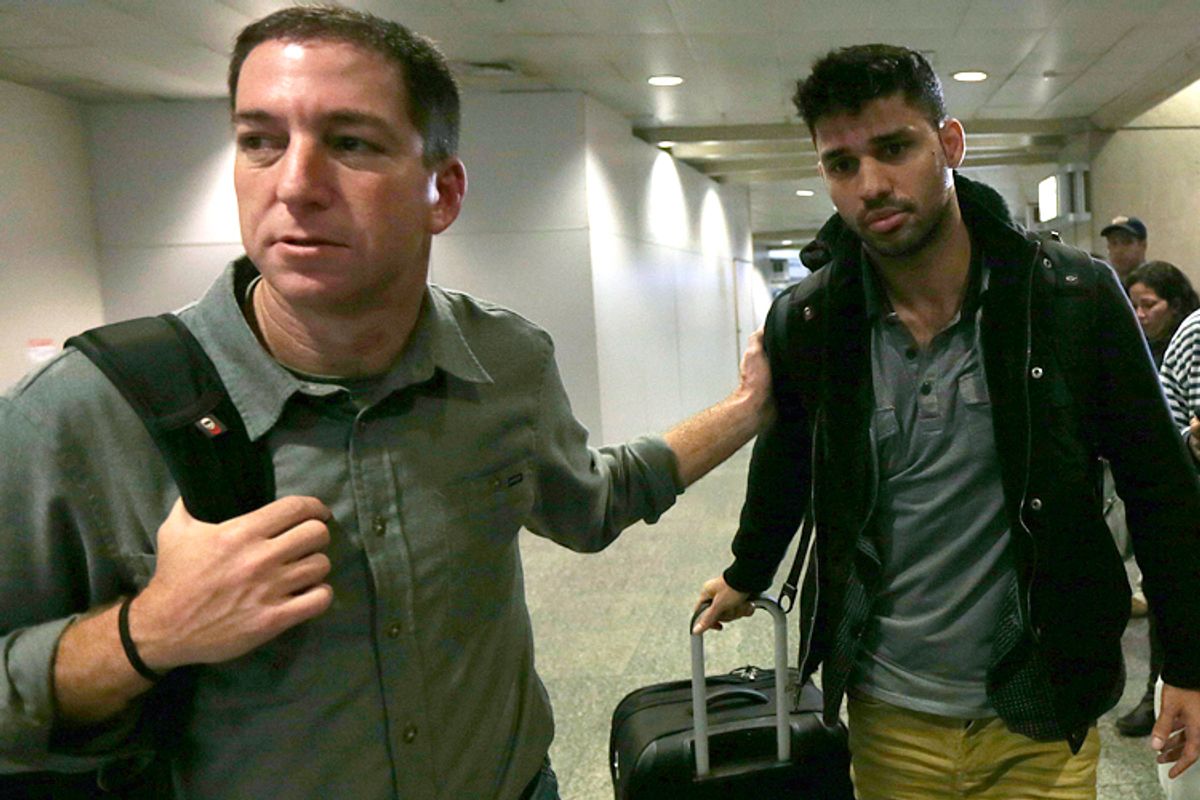 That Western governments needed such a public reminder that "journalism is not terrorism" is an illustrative commentary on how intense today's assault is on basic press freedom. That some would consequently depict Greenwald's promise to be a "more aggressive" reporter as an unacceptable threat -- rather than a simple pledge to keep doing his job -- is an even more illustrative commentary on the authoritarian mind-set. Indeed, by their own frightening logic, such critics apparently want journalists to react to government thuggery not with defiance and persistence, but instead with apologetic promises to be less aggressive in their reporting and/or pledges to keep quiet in the future.

Keeping quiet, of course, is apparently what the U.S. government did in the last few days, and Maddow expertly documents how that reticence is actually one of the big reveals in this latest chapter of the NSA saga. As she shows, British officials gave the United States a "heads up" about their use of anti-terrorism laws against Greenwald's spouse -- and it was the U.S. reaction, or lack thereof, that is so damning:

We have that kind of special relationship with Britain where if our government were outraged that this detention was going to happen, we could have objected, right? We could have at least asked our dear friends, the British government, to not do this. Maybe in the interests of not intimidating the activities of the free press, if not for any other reason.

Did our government make any objections when they got advanced notice from Britain that this detention was going to happen? Did our government protest? And if not, why not? I tend to think that we did not protest since it went ahead...

If the United States wants to convince the world that the Glenn Greenwalds and Laura Poitrases of the world are correct when they say...that counterterrorism is being used to justify all sorts of things that are not justified by the actual threat of terrorism...including journalism, then putting journalists and their families through marathon interrogations and seizing all their electronics is a really great way to start convincing the world that all that reporting is accurate.

Letting our closest allies do it while we stand silent is the same thing as us doing it.

So, to review: A U.S. media outlet, Guardian America, paid for Miranda's travel, meaning he was clearly working in some sort of a journalistic capacity -- specifically, he was assisting the reporting of Greenwald and Laura Poitras (though even if he wasn't, would such harsh treatment be any more defensible?). The U.S. government was given a "heads up" that Miranda was going to nonetheless be targeted by anti-terrorism statutes on the grounds that his journalistic work "would help terrorism." Additionally, according to Reuters, the U.S. government was specifically told that the U.K. action was designed "to send a message" to the American-based news outlet. And yet, despite all that, it seems  the U.S. government -- which is supposed to be an international advocate for and defender of press freedom -- chose to do nothing.

As Maddow correctly implies, that kind of diplomatic inaction by the Obama administration is, unto itself, a form of ideological action against press freedom. Such a conclusion becomes all the more self-evident when considering the incident next to President Obama's other oft-ignored moves to curtail those press freedoms.

Remember, as McClatchy reported last month, this is the same president who "personally lobbied" Yemeni dictator Ali Abdullah Saleh to keep journalist Abdulelah Haider Shaye in prison. Shaye's supposed crime? According to McClatchy, he dared to document a White House-ordered drone strike that killed “dozens of civilians, including 14 women and 21 children.”

In the context of such a pattern, the Obama administration's apparent refusal to object to Britain's actions against Miranda seems less like an oversight, accident or isolated incident, and more like a deliberate passive-aggressive move with a very clear objective: to continue equating adversarial journalism with criminal activity.