Why I'm standing up to Wal-Mart

For six years, I worked for the company. But when I decided to strike, they fired me. Now I'm firing back 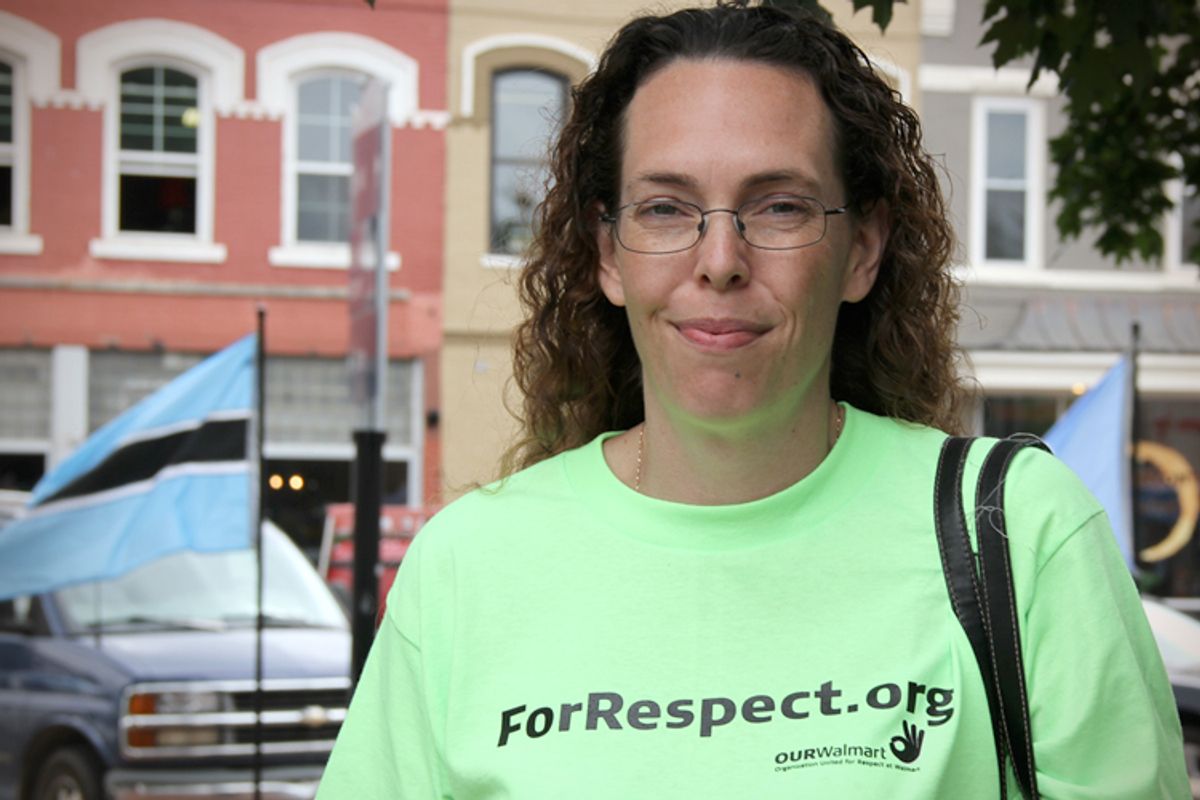 I remember the moment when I first began to fight back against Wal-Mart. The Placerville, Calif., store where I worked was getting ready for a visit from corporate management, and four of us were assigned to the overnight shift. We had to rearrange merchandise aisles, since the company had spent hundreds of dollars to redecorate the store with fake flowers, plastic table covers, glass vases and glossy photos. It looked to me like our managers wanted to put on a real show.

It’s Wal-Mart policy that employees working the night shift earn an additional dollar after three weeks. But when our third week approached, the management switched us back to the day shift. What a pointless exercise: In the end, the corporate executives didn’t show up, and we didn’t get the extra dollar we deserved. It wasn’t fair — and I was sick of it.

This certainly wasn’t the first time I’d experienced the short end of Wal-Mart’s last-minute policy changes. After six years, I’d had it up to my eyeballs with erratic policy shuffles and a lack of respect for its associates.

For the longest time I rationalized to myself: I needed this job. As a single mom, I did whatever it took to keep a roof over our heads, even if that meant shelving electronics and housewares for $12.05 an hour. But I also knew that as a mother, I needed to stand up for what was right, even if it meant taking on our country’s biggest private employer.

Don’t get me wrong — I love my job and customers. But no matter how hard I worked, I still didn’t make enough to afford even basic necessities like food, rent and clothing for my kids. And despite the years I’ve invested there, I was never guaranteed 40 hours a week. Sometimes, I was scheduled as few as eight hours a week. I had to visit three different local food banks one month just to feed my family. Eventually, I had to turn to food stamps.

I’m not alone. When I started talking to my colleagues, it was surprising to find how much we all struggled, scraping by on poverty wages. I’ve spoken to Wal-Mart employees who drove from California to Mexico for access to affordable healthcare. And even worse, plenty just skipped the doctor altogether when they were sick. (I could barely afford the healthcare, which was $72 out of monthly checks that were as low as $600.) And while we struggle, Wal-Mart continues to make $16 billion in profits each year.

But rather than make changes for associates, it seemed to me like Wal-Mart instead retaliated against those of us who would speak out.

And so I resolved to fight. In June, I joined more than 100 associates who went on strike and traveled to Wal-Mart’s annual meeting in Arkansas to let shareholders know what was going on. We were protesting what we believed to be Wal-Mart’s attempts to silence workers who speak out for better jobs.

Many of my fellow strikers lost their jobs. We were simply exercising our constitutional freedom to fight for a better life and better working conditions inside a company that has benefited extravagantly from our labor. And the company that so regularly promotes its American values responded in a manner that seems fundamentally un-American and unfair.

I grew angrier, and my fights grew louder. I joined other working moms at a sit-in at Wal-Mart board director Marissa Mayer’s Yahoo office, because she has been silent while Wal-Mart breaks the law. I refused to leave until Mayer heard my concerns, and I was arrested. The next day, I publicly confronted Mayer at Yahoo’s shareholder meeting about Wal-Mart’s illegal termination.

I am glad to be standing up, proud to be speaking up for something that was clearly wrong. There is just too much at stake to sit on the sidelines.

And when I got home from my trip to try to speak with Ms. Mayer — I was fired.

Wal-Mart claims it fired me, and fired or disciplined my co-workers, for “no call, no show” when we were on a legally protected strike in June. While the move wasn’t surprising, I believe it was against the law, which is why I am part of a nationwide unfair labor practice charge that was filed on July 1.

While Wal-Mart continues its bullying and probably thinks it has heard the last from me, I want the company, fellow associates and all our supporters to know that I am still fighting for what’s right.

I’m not afraid, because I know my co-workers and my community have my back.  Several of us are in Washington, D.C., this week to strengthen our calls for better jobs and to call for our jobs back.

I am overwhelmed by the outpouring of support we have from thousands of supporters nationwide, and we’ll keep fighting and standing strong until Wal-Mart remembers to value the thing that made the company strong in the first place: Real people like me.

Wal-Mart responds: "Like any company, Walmart has an attendance policy that helps ensure our customers are being taken care of. Any reasonable person would agree that if someone is scheduled to work, they are expected to show up or call to say why they can’t make it in.  When someone fails to work their shift, it’s disrespectful to managers and co-workers alike. It creates extra work for our associates who do come to work when they’re scheduled.  And, as a result, it can also prevent us from being able to give the best possible service to each of our customers.

We evaluate every situation individually but, as a general matter, the law does not protect hit-and-run intermittent work stoppages that are part of a coordinated union plan. Ms. Collins was terminated for violations associated with our attendance policy.

Our attendance policy is based on the accumulation of a certain number of absence-related occurrences in a rolling six-month period.  Once an associate exceeds a certain threshold, a multi-step discipline process kicks in. Under this policy and process, she had prior notice that continued absences would lead to termination. Our decision had nothing to do with a specific protest." -- Dan Fogleman, Wal-Mart spokesperson

Barbara Collins is an OUR Walmart member who has worked at Walmart in Placerville, CA, for six years.