A black woman treats a young white shooter with compassion to save children's lives -- and his life, too 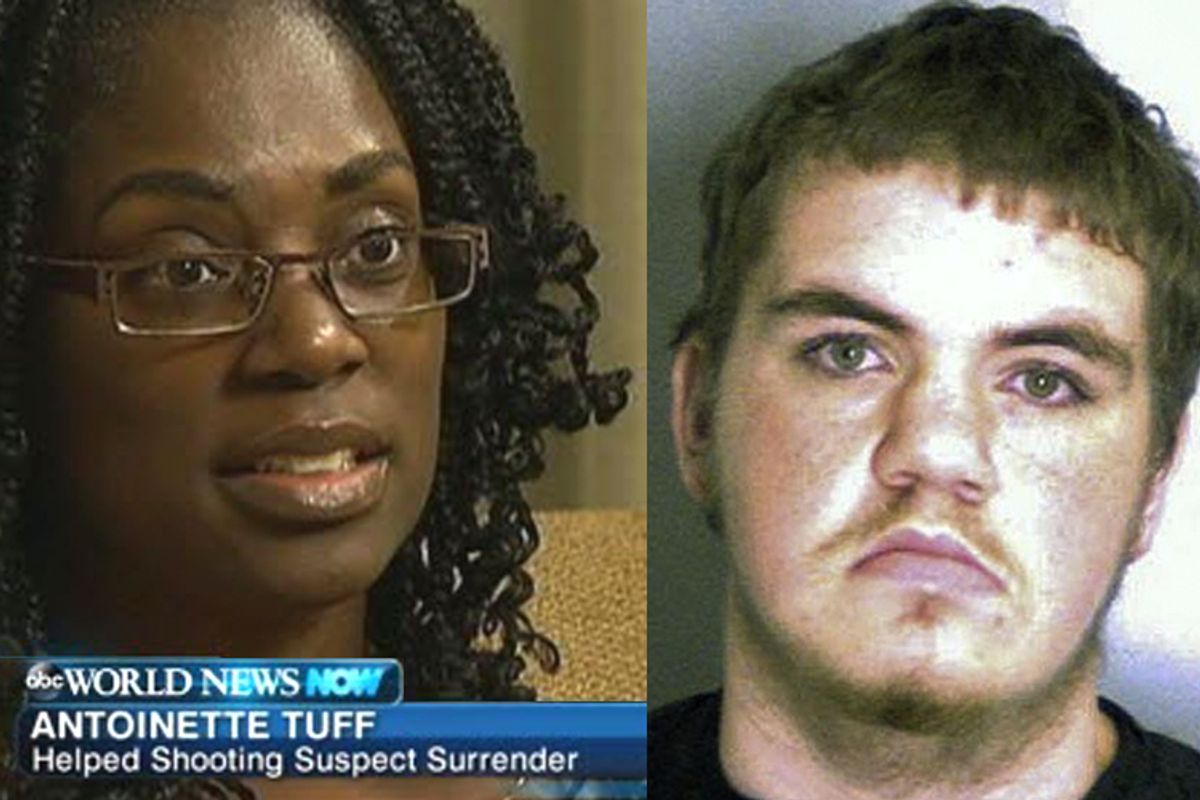 We rarely hear the tales of school-shooting heroism directly from the heroes, tragically, because the heroes rarely live to tell them. Dave Cullen’s haunting “Columbine” tells the poignant story of computer teacher Dave Sanders, who was shot while shepherding his students to safety and died after the students worked hard to save him. After the Sandy Hook shootings, the courage of principal Dawn Hochsprung and teachers like Victoria Soto broke our hearts – but we heard them from survivors and friends and family, because the women were among Adam Lanza’s victims.

That’s part of what makes the story of Antoinette Tuff so compelling – but only part of it. Tuff is, of course, the bookkeeper at Ronald McNair Discovery Learning Center in Decatur, Ga., whose work talking shooter Michael Brandon Hill into surrendering to police Tuesday was captured live on a stunning 911 tape that’s gone viral. The fascination at the heart of Tuff’s tale, the reason it’s riveting, is the way she used compassion and empathy to disarm a mentally ill man intent on killing. "Was the potential there to have another Sandy Hook? Absolutely,” the local police chief told reporters as he praised Tuff.

In this story, the only thing that stopped a bad guy with a gun was a good woman with a heart. Or to entirely rewrite Wayne LaPierre’s dumb Manichaean NRA propaganda: The only thing that stopped an emotionally damaged, despairing and unloved young man with 500 rounds of ammunition was a compassionate woman sharing her own story of damage and despair, and telling him she loved him.

Oh, and then there’s this: As we try to recover from the unnecessarily polarized aftermath of the Trayvon Martin killing and George Zimmerman’s acquittal, it’s worth noting that Tuff is a black woman who helped save a young white man from harm at the hands of police. Of course the race-baiters at Fox News, who were so agitated about the crimes of young black men a few weeks ago, have hardly rushed to emphasize that a young white man opened fire at a predominantly black school – let alone that he was helped to save his own life by an African-American woman (for example, check out how they approach these facts here).

Hill, a mentally ill 20-year-old, seemed convinced the police would kill him because he shot at them, and he might have been right. But Tuff tells him she'll protect him by telling them he hasn't hurt her, and he didn’t actually hit anyone he shot at.

“He thought it was over for him because he’d already been shooting at police officers,” she told a local Atlanta television reporter. “I told him, no, that I would allow them to know that he hadn’t hurt anyone.”

As the 911 tape begins, we hear Hill shooting outside, as the dispatcher tells a terrified Tuff to try to get somewhere safe. But when Hill comes back into the school, Tuff begins telling police outside, and the 911 dispatcher, that the cops should “back off” and not enter the building. At first she calls Hill “sir,” until she switches to calling him “baby,” which is when the momentum shifts and she seems to have a chance to save him from himself. Tuff tells the dispatcher that Hill told her “he should have just gone to the hospital instead of doing this, because he’s not on his medication.”

Gradually we hear her convince Hill to let her help him surrender safely to police.

“I can help you, you want me to talk to them? Let me talk to them and let’s see if we can work it out so you don’t have to go away with them for a long time ... I can let them know you have not tried to harm me or do anything with me.” When he interrupts her to say he’s already shot at police, she reassures him, “That doesn’t make any difference, you didn’t hit anybody.”

Then she turns to the dispatcher and begins to negotiate with police. “He didn’t hit anybody, he just shot outside the door,” Tuff tells the woman. “If I walk outside with him, they won’t shoot him? ... He just wants to go to the hospital … Can you talk to the police and let them know he wants to go outside with me?”

In the midst of all this she soothes Hill by telling him parts of her own story. “Don’t feel bad, baby, my husband just left me after 33 years … I tried to commit suicide last year after my husband left me. But look at me now, I’m still working and everything is OK.”

On the 911 tape we listen as Tuff calmly negotiates taking away Hill’s guns – “Put it all up there,” she tells him -- and supervises him lying on the floor to surrender. “Tell me when you’re ready, then I’ll tell them to come on in,” she says. She directs the dispatcher, “Let him drink his bottle of water. Don’t come in shooting at anything, they can come on in, and I’ma buzz them in.” Then she’s back to soothing Hill.

“I’m gonna sit right here so they’ll see that you didn’t try to harm me … It’s gonna be alright sweetie, I want you to know that I love you, it’s a good thing that you did giving up. Don’t worry about it, we all go through something in life. You’re gonna be OK.”

Only after the police come in and arrest Hill without incident does she tell the dispatcher, “Let me tell you something, baby. I’ve never been so scared in all the days of my life. Oh, Jesus.”

“But you did great,” the dispatcher tells Tuff, speaking for all of us. “You did great.”

She did more than great. There won’t be an Antoinette Tuff to save us from every school shooting – we need tougher gun laws and better mental health care too, and even then, people will find guns and do bad things. But Tuff gave a clinic in empathy, and the way that trying to connect with the pain of another person, even someone scary and dangerous, can save lives. (She credits her pastor with teaching her to "pray on the inside" when she's anxious.) Tuff protected her students, but she also protected Hill from himself, and from the police – and she did it with love.

I can only pray that a white woman faced with a heavily armed, mentally ill young black man would have done the same thing. There’s a reason it’s Antoinette Tuff Day all over social media. We need her right now.