Why there's no female Nate Silver

To join journalism's elite, you have to stoke controversy. And that's a lot more dangerous for women 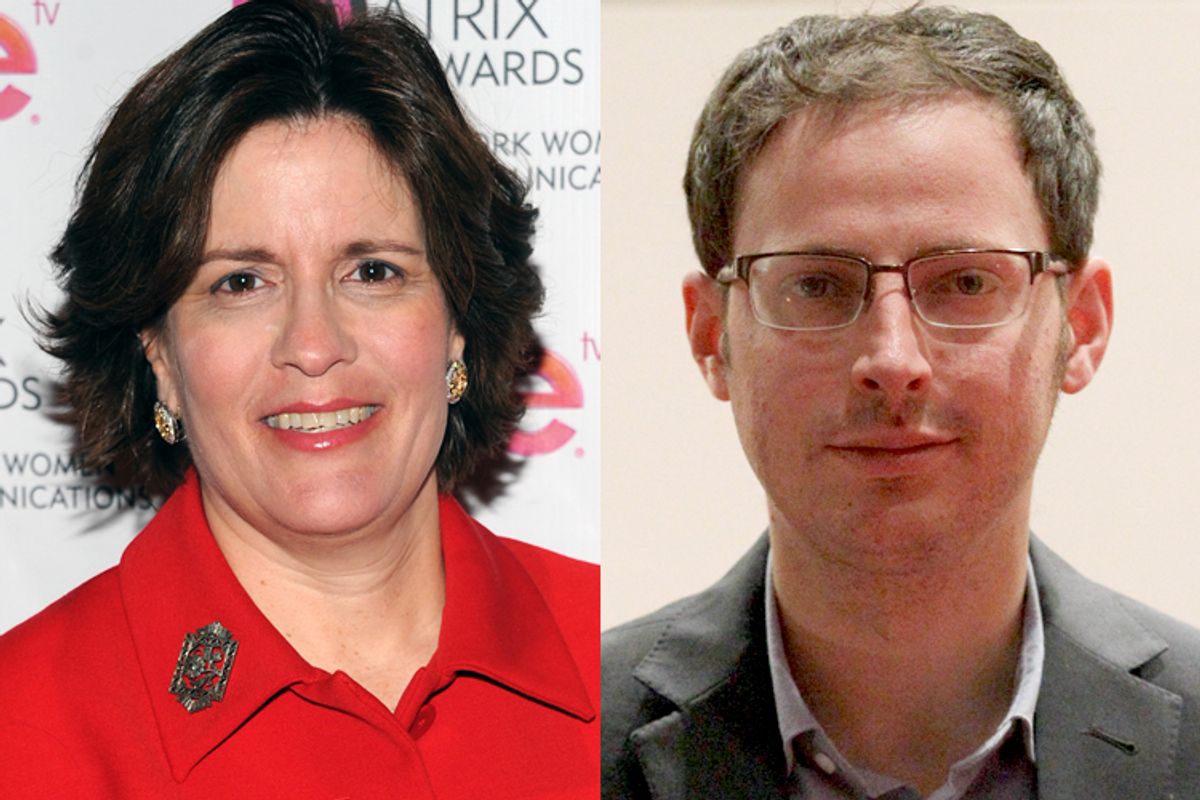 "Am I missing something here?" asks Jack Shafer in his Reuters paean to the "Marquee Brothers," male journalists -- like Ezra Klein, Nate Silver and Andrew Sullivan -- famous enough that news organizations clamor to grant them their own fiefdoms.

In a word, yes. Or in two words, Kara Swisher, the co-founder of All Things D whom Shafer later added to his piece as a footnote. There are other high-profile female journalists he could have added to his list, but he's not wrong -- the pantheon of journalists whose name recognition and clout have made them cottage industries is overwhelmingly male.

What Shafer is missing is the reason. Dana Goldstein (a highly accomplished education journalist in her own right) has speculated that "Most women like to be more sure, more prepared, more versed in research before they write" -- and that they thus may not be able to crank out the sheer number of words needed to achieve brand status. But there's another thing you need to do to become the next Andrew Sullivan: stoke controversy. The most successful branded journalists stake out provocative claims frequently and aggressively, without worrying too much about whether they'll eventually be proved wrong. And this is much riskier for women than it is for men.

There's no question that men who take controversial positions in the media come in for loud and vigorous criticism. Women who do so, however, can expect rape threats. They can expect to be told that they are too fat or ugly to have a valid opinion on anything. They can expect the suggestion that instead of speaking, they might prefer to fellate their male readers. If they are nonwhite, they can expect other, racialized forms of abuse.

So while controversy can be a rough-and-tumble game for some male commentators, for women it's a decision to put their mental health -- and sometimes their physical safety -- on the line. For a female journalist, doing careful, reasoned work that raises interesting questions -- and waiting till you have everything ironclad before you publish anything -- can be a lot safer than taking strong, brash stands right out of the gate. Women who do this may not be able to avoid harassment entirely, but they're more likely to escape the worst of it.

And it's not just about threats. Male journalists who gain a certain level of fame and following get license to weigh in on pretty much anything, while women's forays outside of their established expertise are viewed with much more skepticism. It's hard to build a big personal brand when you have to stay in your wheelhouse -- and after a while, you can internalize the idea that you should stick to what you know for absolutely sure.

This isn't to say there aren't women in media mixing it up and being just as opinionated as men are. It is to say I'm never surprised when women wait, when they qualify, when they hedge. It takes guts not to -- arguably a lot more guts than it would take a man to say the same things. J. Bradford Delong notes that his step-grandmother had to do twice as much to be seen as equal. She also probably had to be twice as brave.

It's easy to say that the solution to this is simply for women to step up, to marshal that bravery and charge into the space dominated by men, consequences be damned. I would love to see more women do this. But I also know it is not necessarily a rational choice. Nearly everything in society is set up to reward women who are conciliatory and punish women who are not. Nice women may not get their own editorial operations at ESPN, but they are more likely to get the approval of their peers. Confrontational women get pictures of their beaten-up faces posted on the Internet.

So while I applaud any woman able to muster the double-courage necessary to speak as freely as men do, I doubt we'll see parity at the Nate Silver level until we're able to make the mainstream media a safer place for women to speak their minds. It's easy to throw up our hands and say this is impossible, that the Internet is a terrible place and will be terrible forever. But the trolls who threaten women with rape are just an extreme version of a very common set of biases: that a man we disagree with deserves argument, while a woman we disagree with merits only mockery. That a man can be a wonk about anything, but a woman must be an expert in her subject. That a man who is wrong is smart but error-prone, but a woman who is wrong is just an idiot. These are biases held not just by the slavering trolls of the Internet, but by nice, normal people who quietly spread them and teach them to their children. They can be reversed.

But until they are, maybe women will always be consigned to the footnotes.