Is it because he went to Harvard? Or is it maybe the whole "trying to shut down the government" thing? 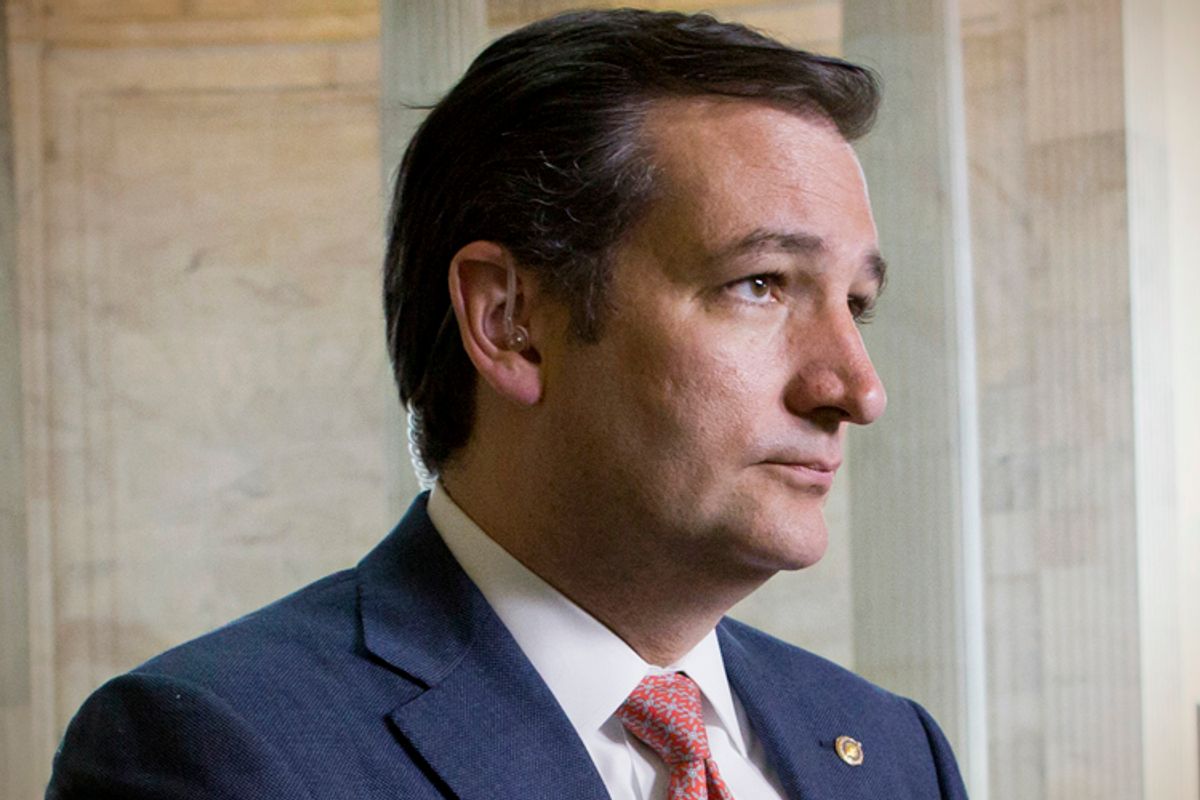 Why are liberals so obsessed with Ted Cruz? That's the question right-wing writers Andrew Stiles and Rich Lowry set out to answer in two separate columns that went up within an hour of each other yesterday (purely by coincidence, I'm sure).

Lowry's theory is that liberals can't get enough Cruz because they are enraged by his Ivy League background. The liberals can't understand how a guy who went to Princeton and Harvard has these crazy beliefs. Cruz comes in for extra scorn because he is "a traitor to his class."

Democrats and liberal pundits would surely dislike Cruz no matter where he went to school, but his pedigree adds an extra element of shocked disbelief to the disdain. “Princeton and Harvard should be disgraced,” former Pennsylvania Gov. Ed Rendell exclaimed on MSNBC, as if graduating a constitutionalist conservative who rises to national prominence is a violation of the schools’ mission statements.

It almost is. Princeton and Harvard aren’t quite the École Nationale d’Administration, the French school that trains that country’s political class, but they are close.

A "constitutionalist conservative" emerging from Harvard Law is actually not remotely surprising. Do you know who else went to Harvard Law? Antonin Scalia! And John Roberts!

But Lowry is actually sort of right. Cruz's background is certainly interesting, because those schools are supposed to reinforce an elite "moderate" ruling class ideology in their future world-running students. The conservatives it turns out are supposed to be "respectable" ones whose actual beliefs may be precisely as despicable as Michele Bachmann's but whose arguments sound very reasonable. Cruz is playing against type. But the Ivy League thing is not actually why liberals "hate" Cruz.

Stiles' column is mainly just a list of mean things liberals have said and written about Cruz. Well, mostly liberals. One of his first examples is Joe Scarborough, the former Republican member of Congress. (Other representative "liberals" include Bill Maher, Tina Brown and Mike Barnicle. You know, all the main liberals.) "The Left’s animosity toward Cruz is approaching hysterical levels not seen since John McCain chose Sarah Palin as a running mate," Stiles says, comparing Cruz to another figure reviled almost as much by establishment conservatives as by "The Left."

Stiles would also like to note that liberals are the Real Racists:

It’s worth noting that people launching these attacks on Ted Cruz are the same people who instantly impute malign or racist motives to almost any criticism of President Obama. (In the world of MSNBC, for example, it is apparently racist to point out that the president plays a lot of golf, or even to refer to him as “Obama.”)

Throughout the column, Stiles prints the mean things liberals say about Cruz -- "political terrorist" and so on -- without ever describing the actual things Cruz said or did that these awful liberals were upset about. Like, Chris Matthews compared Cruz to Joseph McCarthy. Why did he do this? Because Chris Matthews is a mean jerk? Or because Cruz literally accused Chuck Hagel of being a bought-off pawn of North Korea and Saudi Arabia? (Hint: The latter.) Stiles also doesn't note that Republicans rebuked Cruz for his line of questioning. (Stiles also doesn't note that he was one of the conservative writers who pushed the ridiculous "Friends of Hamas" smear.)

Let me attempt to answer this. Liberals write about Ted Cruz because conservatives are obsessed with him. He is one of the most popular politicians on the right, winning conservative straw polls and sitting among the top of the pack in opinion polls of Republicans nationwide. He is very good at drawing attention to himself, something that often seems to be his primary goal as a senator. He is not just hated by The Left, he is hated by many Republicans. He has gotten into fights with John McCain.

But the biggest reason he has been getting so much attention lately isn't the Ivy League thing, or even the Canadian thing. It's the "holding the country hostage until his impossible demands are met" thing. He is the loudest and most prominent figure behind the recent plot to shut down the government unless Obamacare was defunded -- a plot that was notable mostly because the idea was so popular on the activist right that it seemed for a time like it might actually happen. Cruz has spent months, with the backing of prominent allies like the Heritage Foundation, pushing shutdown as a prudent and popular strategy. This has led to an outpouring of writing -- from conservatives -- politely begging Republicans not to listen to Cruz.