How the VMAs died 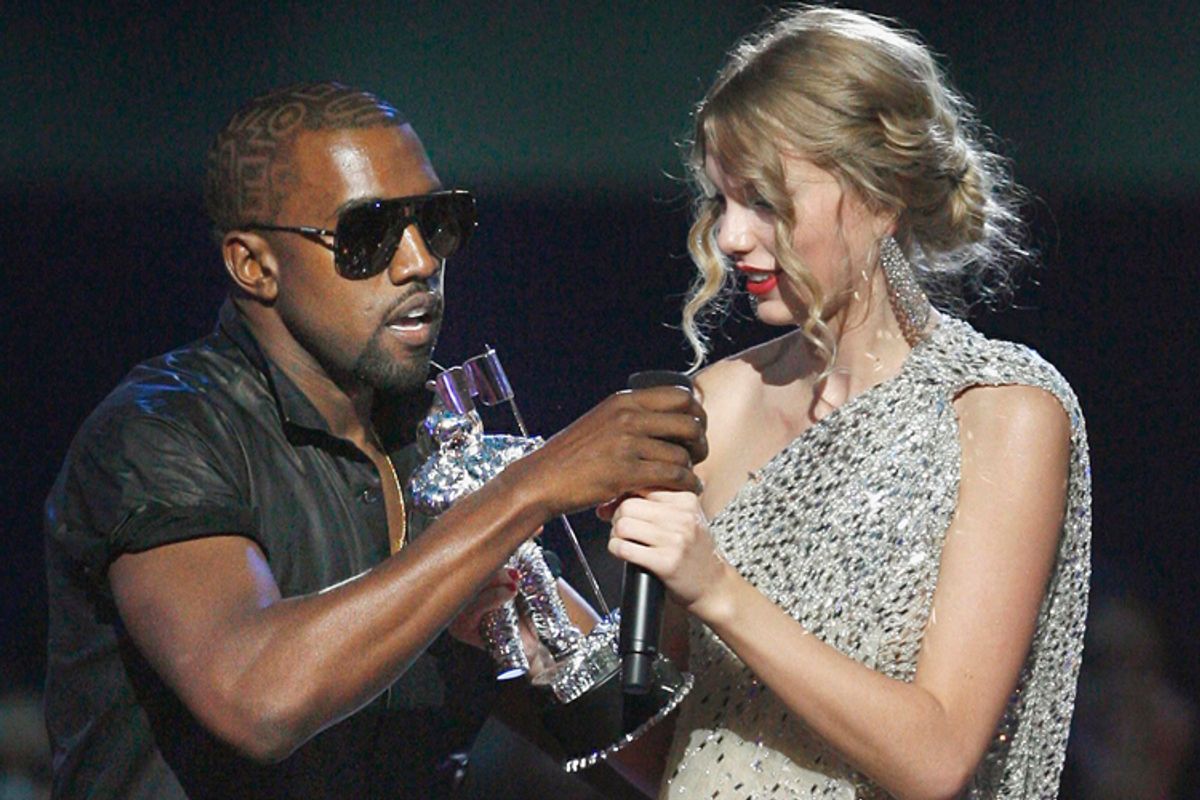 MTV's Video Music Awards, whose 2013 installment is to air Sunday night, is one of the most storied franchises in music. If the Grammys are best known for big collaborative performances featuring white men with guitars, the VMAs are perhaps best-known for over-the-top pop spectacles.

The ceremony is particularly associated with two pop stars, both of whose careers have been tracked by the evolution of the ceremony. The first is Madonna, whose best-known performance, writhing in a wedding gown, took place at the inaugural VMA ceremony. At the 20th ceremony, in 2003, Madonna restaged the performance, this time dressing as a groom and kissing Britney Spears, whose incarnations, from innocent-ish teen to raunchy adult to breaking-down ex-starlet to rehabbed and dead-eyed, have tracked with the latter-day development of the ceremony. As artists like Madonna and Britney -- world-beating stars with sustained chart success recognized by more or less everyone -- have gotten harder and harder to find, the ceremony has come to feel less like the provider of a single water-cooler moment and more like a mélange of parts that don't quite fit together.

The last truly great VMA ceremony was probably the 1999 one, at which the performances included Lauryn Hill, TLC, Jay Z, Eminem and Britney Spears with 'N Sync. It was the very center of an exciting pop music scene. I would hear arguments in favor of 2000, which featured Janet Jackson, Britney Spears solo, Eminem, 'N Sync and Christina Aguilera. But both of these ceremonies -- and the ones preceding them -- benefited from a climate in which stars were truly massive. Each year's awards ceremony was like a pop music trade show, at which one could check out what one's favorite stars were up to this year.

By 2003, the show was relying in no small part on performances by nostalgia acts. Madonna, whose white-hot relevance on the pop scene had faded a bit, returned that year; so did Metallica. But they beat the alternative -- here are some of the acts that performed at the 2004 show:

They can't all be Janet Jackson and Jay Z, it seems.

The show, which had been known for simple, high-concept performances by stars whose magnetism turned the performances into events, grew baroque, moving to Miami so that low-wattage stars could arrive by yacht, then to Las Vegas, where the performances took place in small suites and were cut off for commercials. One of the few performances at the 2007 ceremony that was allowed to run its natural length was by Britney Spears, who, in the throes of a prolonged breakdown, performed a famously terrible lip-sync to "Gimme More." It was the bad sort of provocation; the pop scene had once had room for clever or at least competent attention-getting, but now it was merely trolling its audience. The next year featured the triumphant return of Spears to the ceremony as an apparently mood-controlled but upright pop star, as well as performances by Christina Aguilera and Pink, two pop stars from an earlier part of the century. She won a lifetime achievement award in 2011.

The meta-narrative of Spears' redemption, completed without ever having to perform live, became what the VMAs were good for. Rather than being an exhilarating slice of what was going on in a vibrant pop scene, the show's own narrative had little to do with what was going on outside the arena. The most famous event from the awards ceremony in recent memory was Kanye West's interruption of Taylor Swift as she accepted her award in 2009; it has been referenced endlessly, with both stars performing songs about the incident the following year. (In the ceremony's defense, 2009 brought a very good and conversation-starting performance by Lady Gaga, but performances that good used to happen every year, sometimes multiple times!)

The stars we have today inspire so little; with a couple of exceptions, they're amiable but not provocative, and none seem to have universal appeal or name recognition. And so the ceremony alternately plays up narratives it creates itself (Taylor vs. Kanye, Britney's journey that ended with Gaga in male drag hitting on her onstage) or mixes performances with a heavy hand toward nostalgia acts. Last year's ceremony featured Pink (again!), Green Day and Alicia Keys, all acts whose best days fall between 1996 and 2005.

This year may break the trend. The performers so far announced, though none of them Madonna, are to a one successful current pop stars: Miley Cyrus, Katy Perry, Lady Gaga, Robin Thicke, Kanye West. But the news that 'N Sync is to reunite at the ceremony is discomfiting.

The broken-up boy band that launched Justin Timberlake feels like a relic not merely of the early 2000s but of the unitary youth culture that allowed for a single group to be that popular without a gimmick. Since that time is forever gone, MTV could still make a great show by allowing Gaga or Kanye or Justin simply to perform -- and create something actually worth talking about.