No, you're not impeaching anyone

Tom Coburn, Ted Cruz and other crackpots can't stand up to their base and face reality. Can this party ever change? 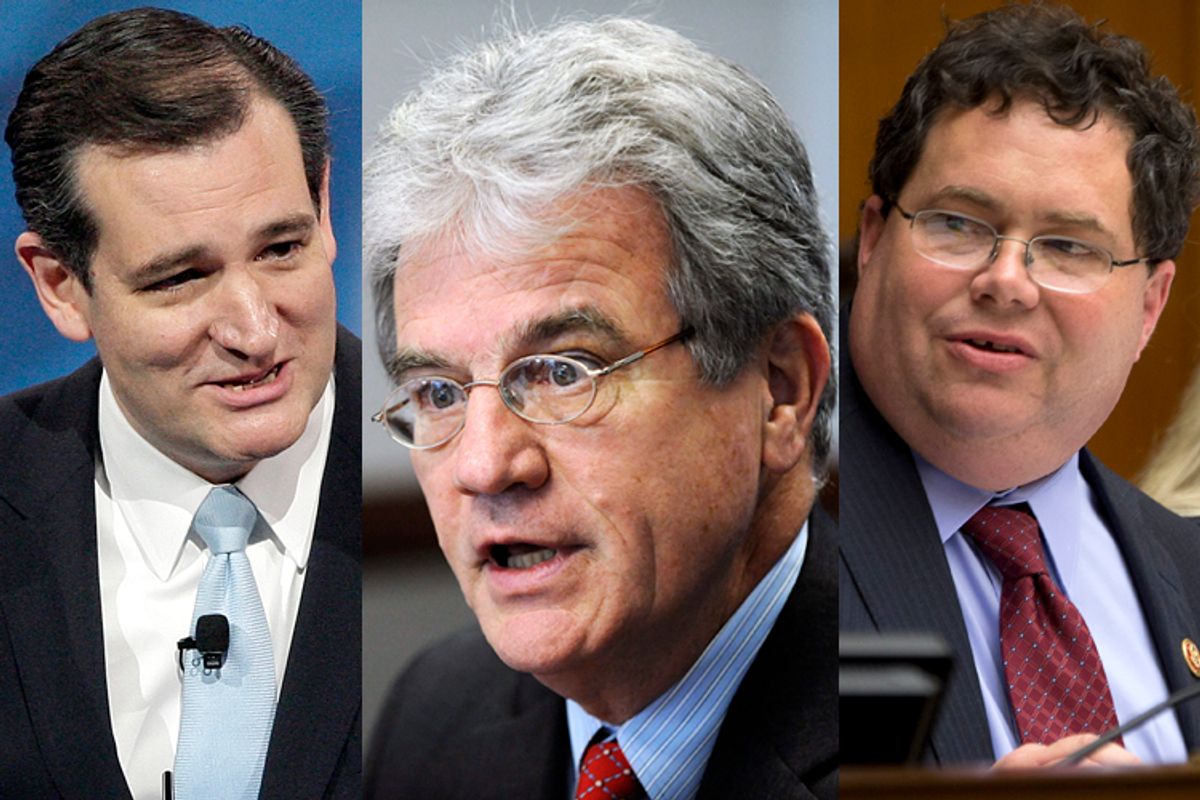 The last time Sen. Tom Coburn spoke warmly but candidly to his Oklahoma constituents about his “friend” Barack Obama, it was to reassure them that the president doesn’t want to “destroy America.” Instead, Coburn said two years ago, “his intent is to create dependency because it worked so well for him.” He went on: “As an African-American male,” Obama received “tremendous advantage from a lot of these programs.” That’s what friends do, in Coburn’s world: They indulge in delusional racial stereotyping to defend their “friend” from detractors.

Also? Apparently they claim their “friend” is “perilously close” to “high crimes and misdemeanors” – the standard for impeaching a president – and promise they won’t let their friendship stand in the way of impeaching the “lawless” president.

Coburn is just the latest Republican to humor his crackpot constituents in August town halls by suggesting the president can and/or should be impeached. By the standards of the modern GOP, he may be the most surprising, since every once in a while he has an outbreak of sanity and refuses to go along with his party’s nihilism caucus. Most recently he said Sen. Mike Lee’s drive to shut down the government to repeal Obamacare amounts to “destroying the Republican Party.”

To make up for that breach with the base, Coburn told constituents in Muskogee that the administration is “lawless” and “getting perilously close” to the constitutional standard for impeachment. He one-upped Lee by joining crackpot Mark Levin’s call for a new constitutional convention. “The constitutional republic that we have is at risk,” he told the crowd. When asked directly about impeachment, he said, “I think those are serious things, but we’re in serious times. And I don’t have the legal background to know if that rises to ‘high crimes and misdemeanors,’ but I think you’re getting perilously close.”

To be fair, Coburn also defended his “friend” Obama by allowing that the first black president just might not be very good at his job. “I think there’s some intended violation of law in this administration, but I also think there’s a ton of incompetence,” he said.  Glad to have that out there.

Though Coburn’s impeachment remarks have triggered a lot of coverage, he’s gotten less attention for another wild assertion to the Muskogee crowd: that a better strategy for repealing Obamacare than shutting down the government is to use the debt ceiling deadline.

But you know, maybe Cruz is getting ahead of himself because he believes his fellow Texan Rep. Blake Farenhold, who recently told his constituents that Republicans have the votes in the House to impeach Obama. “If we were to impeach the president tomorrow, you could probably get the votes in the House of Representatives to do it,” he said. “But it would go to the Senate and he wouldn’t be convicted.”

Of course, reindeer farmer Kerry Bentivoglio thinks impeaching Obama would be “a dream come true,” but he sounded more skeptical than Coburn about the chances of doing it – though he admitted consulting lawyers about possible grounds. “Until we have the evidence, you’re going to become a laughingstock if you’ve submitted a bill to impeach the president, because number one, you’ve got to convince the press,” he said.

So let’s recap: Coburn, one of the Republicans the Beltway media regularly use as an example of someone willing to work with Obama, sounds more convinced the president might be impeachable than a former reindeer farmer who resides on the party’s wingnut fringe. Reporters have to stop covering the supposed attempt of the GOP to heal itself, because it’s not happening. Real change in the party will require Republican leaders leveling with their base. That means standing up to nuts like Mark Levin and Rush Limbaugh and the delusional extremists organizing “Overpasses for Obama’s impeachment” (yes, that’s a thing) and showing up to rant at town halls.

Tom Coburn doesn’t have the guts to do that, so he can’t be counted among the last few reasonable Republicans. Let’s hope Time magazine leaves him off its annual list of 100 "influential" luminaries next year. Or at least let's hope Obama declines to write the tribute to his GOP “friend” next time around.