Yellowcake all over again: Don't believe the Syrian interventionists

Possible chemical weapons attack has the usual hawks urging intervention in Syria. Their intel could be wrong again 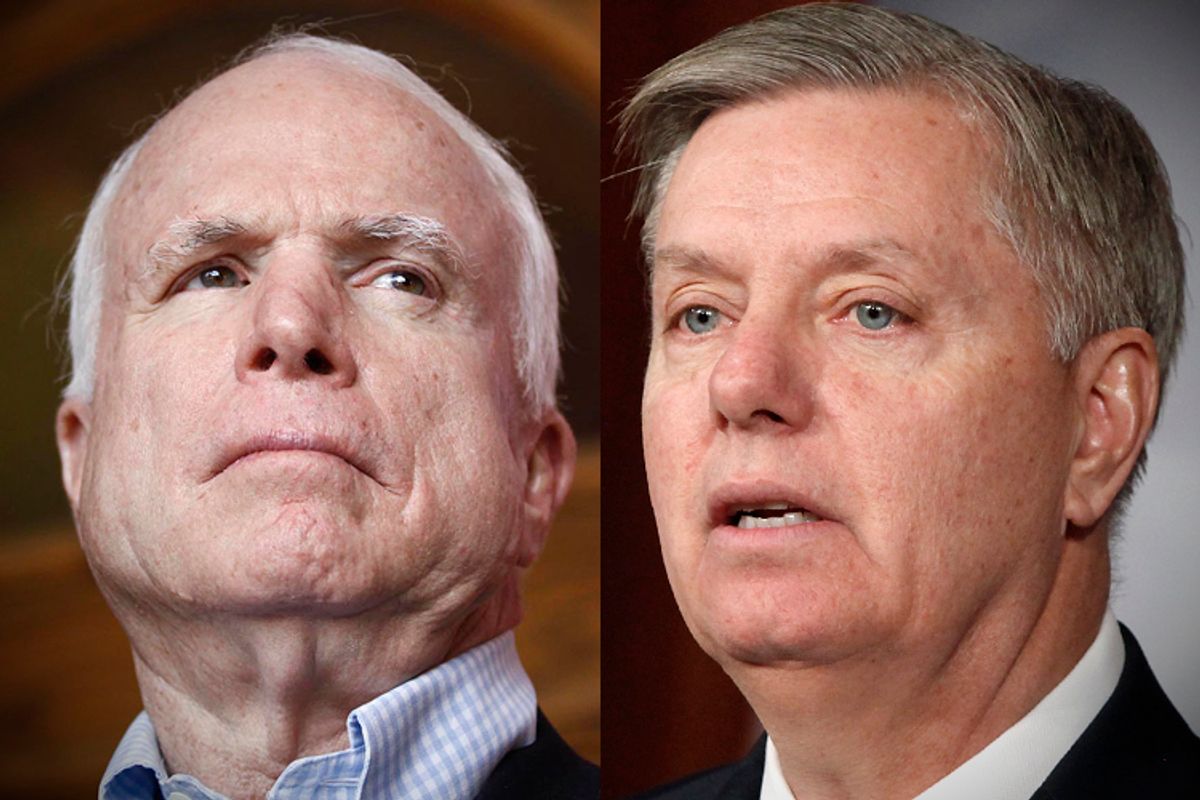 What we know about what just happened in Syria: Someone seems to have sent chemically toxic substances into several suburbs of Damascus this week, though we have to stay with “seems” at the moment, for not even this is yet certain.

What we do not know about what just happened in Syria: everything else.

I exaggerate slightly, for there is one other thing we know. Whoever launched lethal rockets into rebel-held areas around the Syrian capital, safely assuming someone did, was either stupid or very stupid.

It is essential to consider this moment with the utmost care, setting aside all prejudice and bias, all cartoon imagery, all pseudo-righteousness, all presumptions. And all perverse desires, one should add, as many people will be pleased if it is found that the regime of President Bashar al–Assad did the dastardly deed.

“It’s obvious from the pictures when you see the dead bodies of children and women and others stacked up,” said Sen. John McCain, who hungers for American intervention against Assad. This is what I mean. Nothing is obvious. Reckless people in high office have a long history of this kind of misrepresentation. It is well to recall it.

Last Sunday, a team of 20 United Nations inspectors arrived in Syria to examine three sites where the use of chemical weapons has been alleged. The eastern suburbs of the capital are not on that list, but on Thursday the Assad government, by way of its principal supporters in Russia, promised “objective investigation of all possible cases of use of chemical weapons on Syrian territory.” This promise must come good, not least because Moscow is now on the line as well as Damascus.

Fair enough to suspect Assad’s army, which has spent two years fighting a sectarian insurgency — yes, that is what it is. Assad has so far failed to counter the revolt decisively, and the stalemate has made for an unusually ugly war. Assad has been accused of deploying chemical weapons before, and while the evidence has been flimsy in each case, the allegations lie somewhere between possible and probable.

Then there are the various rebel factions. They have assiduously sought the support of sympathetic Western powers, hoping for more than the medical supplies they now receive. They want arms, artillery, training, air support and, in the best of outcomes, troops. They know that the U.S. and some of its European allies want to tip the military balance in their favor so as to force Assad to the conference table. And they know that evidence that Assad is using chemical weapons is a tripwire — the “red line,” as President Obama called it late last year, the point at which some form of intervention must be considered.

This is not to say that this week’s events do not reek of an effort to manipulate world opinion by way of a media-ready display of human horror it is almost too cynical to contemplate. But contemplate it we must.

Assad’s people may have perpetrated the shelling of towns near the capital as their residents slept in the early hours of Wednesday. But this would make him very stupid, given there is a team of weapons inspectors camped in Damascus hotels as we speak. It is hard to tell whether or not Assad is stupid, and if so how stupid, but it is equally hard to accept he could be so stupid as to order these events when and where they occurred.

As to the insurgents, they stand richly to gain if blame can be assigned to their adversary. This would make them stupid, for the early accounts and images coming out of Syria suggest a stunningly clumsy ploy to get gruesomeness in front of the digital cameras and the cellular phone videos and the gaze of U.N. visitors — and, finally, our gaze. Stupid, yes, but one of the things one notices about stupid people over the years is that they always overestimate how stupid other people are.

“Stupid” gets it, in my view, not “very stupid.” Logic suggests it is likely that Syrian rebels have just treated the watching world to a crime beyond even the unforgivable phenomenon known antiseptically as collateral damage. If they turn out to be the authors of the deaths still being counted, it will come to the purposeful murder of innocents.

We know nothing at this early moment, as noted, so all must remain in the “if” file. There are a lot of bodies on video but no indication of what happened to them. The fatality counts run from 130 to 10 times that figure. The news agencies have published reams, but all of it is hearsay with datelines such as Beirut and Istanbul, none from the scene.

Was it chemical weapons? Not even this is evident: It could have been industrial gases or concentrated volumes of tear gas. How did it get there? The vehicles appear to be homemade rockets, but all sides use those — the insurgents, the Syrian army, Hezbollah, which backs Assad. Why did the medics not get sick or die, as we are told they would have in an attack using chemical weapons?

Still more: Why no visuals after the attacks — only when the corpses were lined up in mosques? A Swedish scientist tells Al Jazeera that the number of deaths is suspiciously high. What about this? And the unseemly efficiency with which imagery was delivered to the international media: What about that?

We have to live with these unknowns for now. We Americans have little gift for states of uncertainty, preferring conclusions even when the conclusions may be unfounded. Sen. McCain gives us a ready example of the phenomenon. But there are many others to remember, and remembering is always a powerful practice. Remember “yellow rain,” when the Reagan administration accused the Vietnamese of deploying sarin gas? After a frenzy of outrage, it turned out to be the droppings of bumble bees. Remember the “WMD” bit before the Iraq war. That “certainty” cost hundreds of thousands of civilian deaths. McCain favored the WMD thesis, I am sure.

Being of the generation that watched the Vietnam war on television, I long ago gave up taking my government’s word for anything other than the price of a stamp. Wariness is the default position, and it is well justified. I urge it on those younger. We will have to see if Syria is another case.

Footnote: President Obama’s political foes have hounded him since he made his famous “red line” statement on Syria not quite a year ago. It was a miscalculation, as many have observed, and it comes back now to haunt him once again. He will join the “stupids” if he acts on the error. Better to call a mistake what it is and get on with intelligent thinking. The idea of making policy on the basis of a “red line” or a “line in the sand” or what have you rests well only with those who have seen too many John Wayne movies. The Syria solution, gas or no gas, Assad or the insurgents, will come across a mahogany table and no other way.