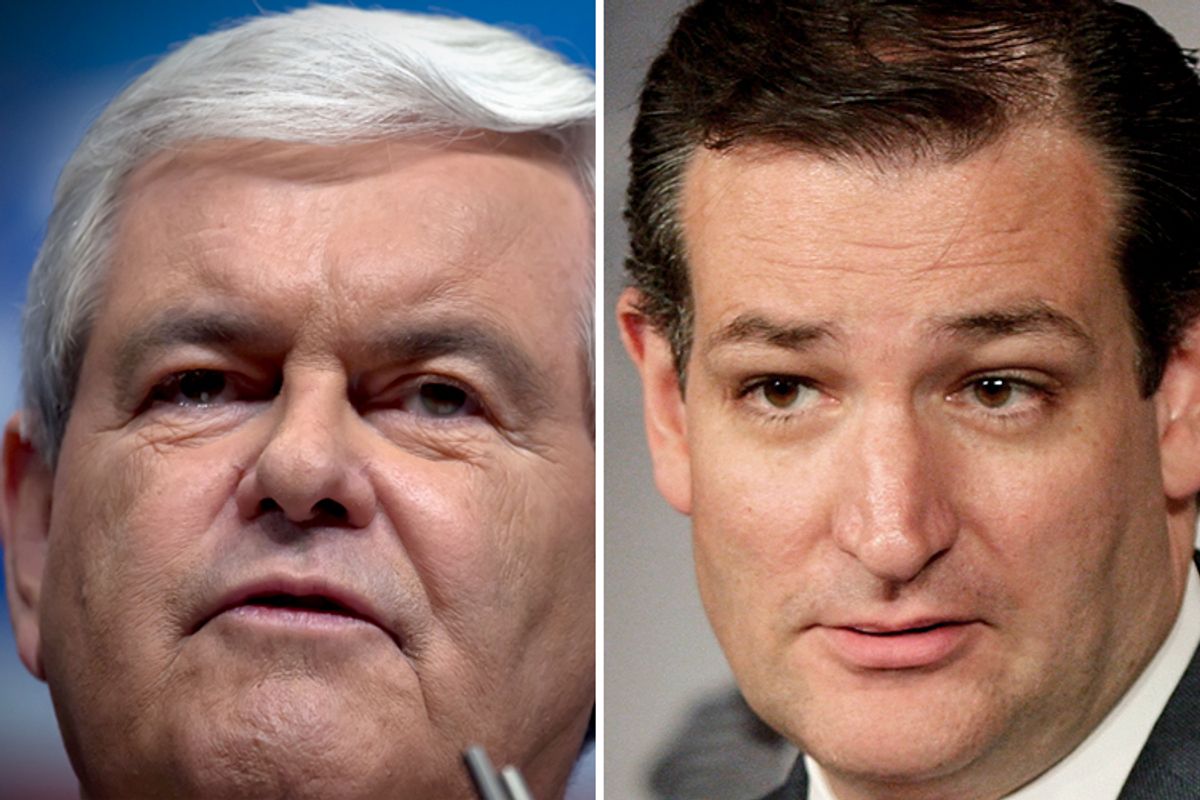 It’s becoming a ritual of the congressional recess for Republicans: At town halls, and other venues, frustrated (or angry, or hopeful) conservatives ask them about the impeachment of Barack Obama.

And Republican politicians … well, their strategy (as Joan Walsh details in a nice item summing up these episodes) is all over the place. So we have Ted Cruz calling it a “good question” but noting that there just aren’t the votes in the Senate to convict; one member of the House saying that the votes are there in the House, but not in the Senate; another saying it would be a “dream come true” but that they just needed the “evidence”; and Sen. Tom Coburn saying that Obama is “perilously close” to impeachment.

Well, the answers are all over the place in one sense, but in another they are all actually pretty similar: None of them dismissed the idea out of hand. None of them simply said that impeachment is an extreme remedy for only the most serious malfeasance in office, and as wrong as they believe Barack Obama has been on matters of public policy, and as bad a president as they believe he has been, there’s absolutely nothing out there remotely in the neighborhood of an impeachable offense.

That’s what any responsible elected official would do.

But the second thing all these answers appear to have in common is actually even more astonishing and irresponsible: None of these politicians seem to feel any need to actually discuss the grounds for impeachment. At best there’s some hand-waving around the minor scandals of the last year, but for the most part it’s just assumed that impeachment is what Republicans normally do to Democratic presidents, just because.

The conclusions? Bill Clinton wasn’t impeached over sex (what Democrats believe) or over perjury (what Republicans claim); he was impeached because he was a Democrat in the White House. That’s enough.

Republican politicians are absolutely, completely, 100 percent terrified of leaving any room between themselves and those at the conservative fringes of their party. That’s true on both policy substance and on procedure.

Or, I suppose, there may be some Republican politicians so deeply inside the closed conservative information feedback loop that they actually believe that there is a good deal of evidence implicating Obama of high crimes and misdemeanors.

Either way, this makes Republican politicians extraordinarily easy to manipulate by anyone who can plausibly claim to be a “real” conservative. Whatever they throw out there, Republican elected officials feel the need to treat as if it was completely serious and sensible.

Part of the explanation: There are no core “conservative” ideas for these politicians to embrace, ideas that would allow them to successfully fight back against charges that they are squishes or “RINOs.” It’s not ideology; it’s partisanship.

This is also another case of “constitutional hardball,” in which a political party exploits the literal meaning of the rules of the game, regardless of norms and shared understandings about how the constitutional system is supposed to work and has worked.

So will we get an actual impeachment? On the one hand, it does seem that one positive lesson Republican congressional leaders did learn from the Newt Gingrich years is that a pointless impeachment without the votes to convict was a pretty bad idea. On the other hand, what Republicans also seemed to have learned from Newt is that impeachment is pretty much the normal punishment to administer to a president you don’t like much.

I’ve been surprised so far that there hasn’t even been an impeachment resolution introduced, even by the Crazy Caucus; I expected Louie Gohmert or Michele Bachmann or someone similar to have done so by now. So perhaps they really will restrain themselves over the next three years. But don’t be surprised if they just can’t help themselves.