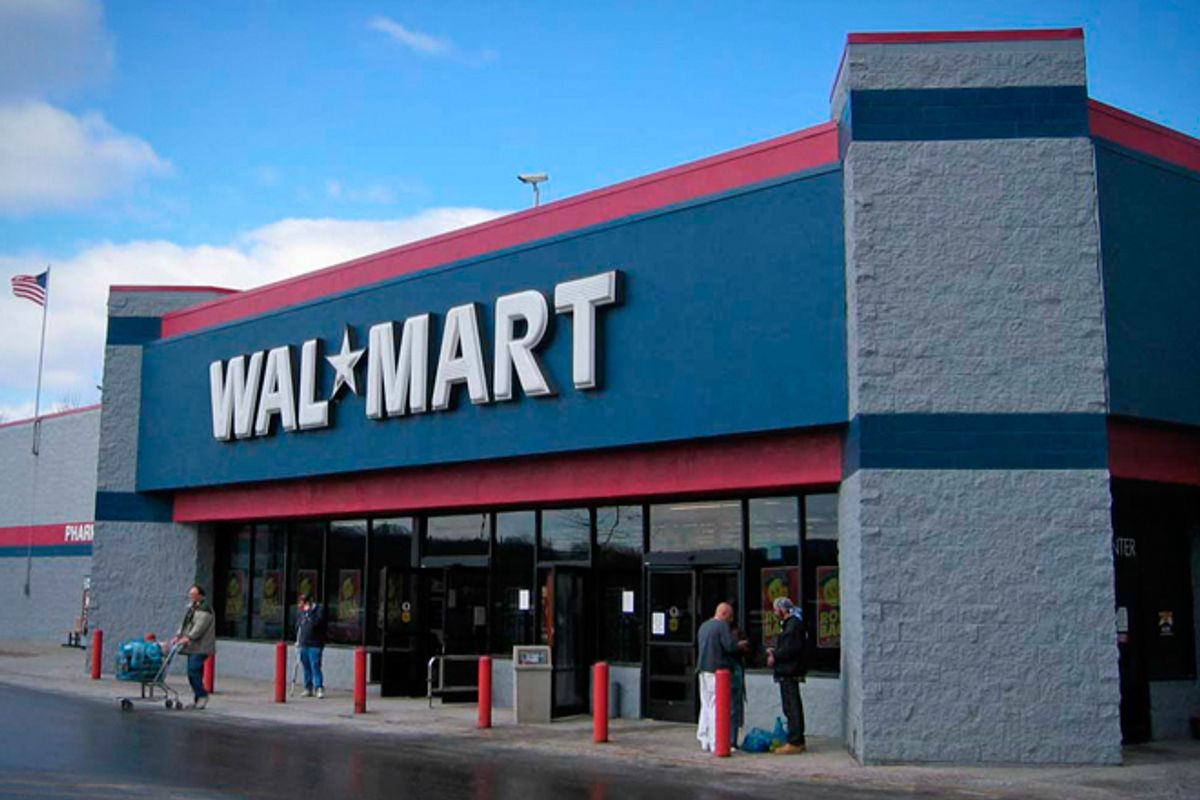 Almost 30 years ago, as the U.S. was bleeding jobs, Walmart launched a "Buy America" program and started hanging "Made in America" signs in its 750 stores. It was a marketing success, cementing the retailer's popularity in the country's struggling, blue-collar heartland. A few years later, NBC's Dateline revealed the program to be a sham. Sure, Walmart was willing to buy U.S.-made goods — so long as they were as cheap as imports, which, of course, they weren't. Dateline found that Walmart's sourcing was in fact rapidly shifting to Asia.

This year, Walmart is back with a new "Buy America" program. In January, the company announced that it would purchase an additional $50 billion worth of domestic goods over the next decade. This week, Walmart is convening several hundred suppliers, along with a handful of governors, for a summit on U.S. manufacturing.

This sounds pretty substantial, but in fact it's just a more sophisticated and media savvy version of Walmart's hollow 1980s Buy America campaign. For starters, $50 billion over a decade may sound huge at first, but measured against Walmart's galactic size, it's not. An additional $5 billion a year amounts to only 1.5 percent of what Walmart currently spends on inventory.

Worse, very little of this small increase in spending on American-made goods will actually result in new U.S. production and jobs. Most of the projected increase will simply be a byproduct of Walmart's continued takeover of the grocery industry. Most grocery products sold in the U.S. are produced here. As Walmart expands its share of U.S. grocery sales — it now captures 25 percent, up from 6 percent in 1998 — it will buy more U.S. foods. But this doesn't mean new jobs, because other grocers are losing market share and buying less. What it does mean is lower wages. As I reported earlier this year, Walmart's growing control of the grocery sector is pushing down wages throughout food production.

Groceries now account for 55 percent of Walmart's U.S. revenue, up from 24 percent in 2003. The company is planning to grow that ratio even further, with about 100 Neighborhood Market stores (Walmart's new-ish supermarket format) in the pipeline this year alone, along with 125 new supercenters. So we can expect that at least half of Walmart's new spending on U.S. goods will be for groceries, with no net gain in jobs and, very likely, a further decline in wages.

As for the rest, to a large extent, Walmart is simply taking credit for a shift that has already happened. Over the last few years, U.S. manufacturing has undergone a modest revival, owing mainly to rising labor costs in China. Unfortunately, it's not at all clear that this revival will do much to resurrect the American middle class, because a lot of the new production is highly automated and located in the anti-union South.

This is especially true for the companies supplying Walmart. Take 1888 Mills, a Georgia towel maker that has a new (and much-publicized) contract to produce American-made towels for Walmart. The company, which plans to maintain its overseas workforce of 14,000 for the bulk of its production, will be adding only 35 jobs at its U.S. factory to meet Walmart's multi-year purchase agreement. The jobs pay $12-14 an hour.

In a way, Walmart's Buy America program represents the home stretch of the economic transformation the company set in motion decades ago, when it set out to replace the American middle class, rooted in small business ownership and unionized jobs, with a vast underclass that has little choice but to rely on the shoddy, short-lived products sold at big-box stores to get by.

The only way out of this is to curtail Walmart's continued expansion, particularly its planned takeover of urban markets, which threatens to cut off other viable economic development options. Walmart's growth in cities, for example, could disrupt a small but promising corner of the manufacturing revival: a plethora of new consumer goods manufacturers in cities like New York, Los Angeles, and San Francisco that are responding to growing public demand for long-lasting, locally made products. These small start-ups need a diverse marketplace of independent retailers and small local chains to reach consumers — precisely the ecosystem that Walmart, buoyed by its Buy America marketing, aims to eradicate.

Stacy Mitchell is a senior researcher at the Institute for Local Self-Reliance , where she directs an initiative on independent business. She is the author of  Big-Box Swindle and also produces a popular monthly newsletter, the Hometown Advantage Bulletin . Catch her recent TEDx Talk: Why We Can't Shop Our Way to a Better Economy .