Where are the women in today's hip-hop?

Women helped make hip-hop what it is today -- so why aren't female MCs more visible? 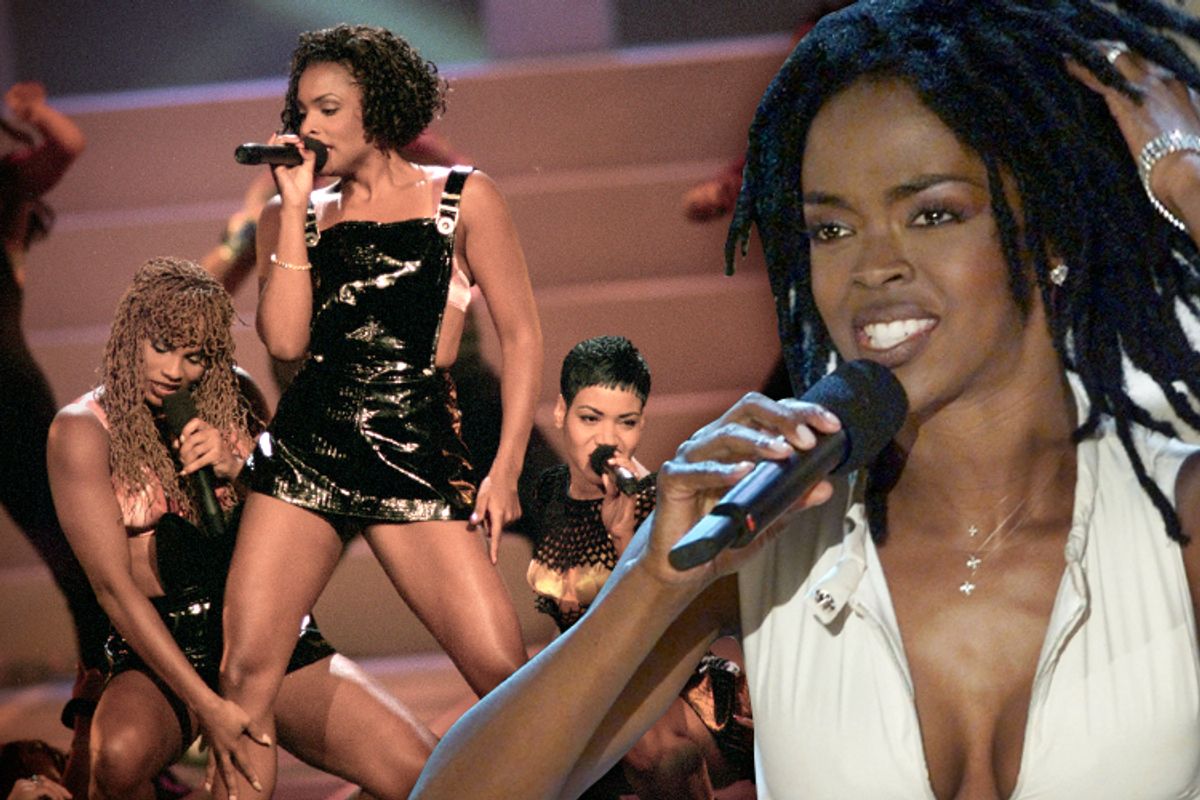 Hip-hop culture was born in the heart of the Bronx, and the date of its "birth" is officially recognized as Aug. 11, 1973. This year, fans, both die-hard “heads” and casual rap music consumers, are celebrating 40 years of this ever-changing art form. Hip-hop, as a culture, has now spanned two generations, and has become one of America's greatest exports. With direct impact on places like France, Japan and South Africa, hip-hop has undeniably taken over the globe. And for the past four decades, women have played an instrumental part in shaping the culture’s looks and sounds. Women changed the hip-hop game several times over, inspiring millions and elevating minds along the way -- but as hip-hop's gotten more commercial, women's voices have been lost.

In the beginning there were MC Sha Rock, Roxanne Shante and Lady Pink, three teenage ladies who proved that hip-hop was not just about the boys. As a counterculture, hip-hop gave young people a safe space to feel respected by their peers in a society that often silenced their voices -- and maintaining that respect was critical. One of the best ways to earn it was to keep up with or trump their peers, and these women did just that.

MC Sha Rock danced as a “B-Girl” in the Bronx in the 1970s and was the first woman to join an established all-male group, the Funky Four + 1 More. Though Sha Rock was a hip-hop pioneer, able to hold her own in male-dominated rap battles, she is still the “+ 1 More” to most, and her name is hardly known to those who aren’t hip-hop historians or purists.

Lady Pink became the first woman to reach prominence as a graffiti artist in the early years of hip-hop. She joined an all-male graffiti group and took and the same risks as the young men did to tag subway cars and get her name out across the city. The risks were worth the reward: Lady Pink went on to have a successful career as a painter, muralist and internationally respected graffiti artist.

After linking up with the well-known Juice Crew, Roxanne Shante became the first female hip-hop artist who was really a household name. She recorded “Roxanne’s Revenge,” a response to UTFO’s “Roxanne, Roxanne,” a song about a girl who rejected the advances of all of the men in the group. In the song, she explains why she doesn’t accept any of the men -- they’re simply not good enough for her. She dares them to either step up and prove that they can respect her, or keep it moving. This historic rap battle would set a tone for women who sought to enter the rap arena and compete with men.

Until the groundbreaking group Salt-N-Pepa came on the scene, women in hip-hop were primarily associated with all-male crews. There were sprinkles of feminist demands for equality and respect, but most women adopted masculine self-presentations to be taken seriously as hip-hop artists; being a “girl” was either almost a liability or a novelty. But Salt-N-Pepa embraced their “femininity" -- instead of seeking to be respected in spite of it, they wanted to be recognized because of it. I’m not alone when I say Salt-N-Pepa were my first exposure to feminism, though I didn’t quite understand it at the time. What I did know was that they were empowered women speaking about embracing their beauty, owning and protecting their sexuality, and addressing social issues like HIV/AIDS and gender inequality. Interestingly enough, many of their early songs were written by male producer Hurby Azor. Rather than negate the group’s impact, his involvement helped give voice to women who needed that type of representation in a genre still dominated by men. Sant-N-Pepa's pro-woman politics were on display in "Ain't Nothing but a She Thing:"

Got to break my neck just to get my respect
Go to work and get paid less than a man
When I’m doin’ the same damn thing that he can
When I’m aggressive then I’m a bitch
When I got attitude you call me a witch
Treat me like a sex-object (that ain’t smooth)
Underestimate the mind, oh yeah, you’re a fool
Weaker sex, yeah, right, that’s the joke (ha!)
Have you ever been in labor? I don’t think so, nope
I’m a genuine feminine female thang

Queen Latifah’s “U.N.I.T.Y” addressed street harassment, discrimination and domestic violence in black communities, documenting experiences that black women had remained mostly silent about for far too long. Fearing being labeled as race traitors, black women have often kept secret the sexual and physical abuse they’ve endured at the hands of black men in their homes and communities. Eve’s “Love Is Blind” describes her fatal revenge against the man who raped and abused her best friend. Black women in poorer communities, and those without access to academic writings about feminism and black power, had little exposure to movements claiming to be advocating for their rights. Women in hip-hop, then, became a voice for underserved women whose voices regularly went ignored.

As more women emerged in hop-hop, their presentations of womanhood and femininity became more diverse. In the mid- to late 1990s, Lil Kim and Foxy Brown made brazen use of sexual imagery, sparking debates about whether their music was sex-positive or sexually exploitative. On one hand, they rapped about their sexual prowess with an arrogant swagger that suggested they were in control of their interactions with men. On the other hand, most of their early songs were written by men and they became popular because of their association with popular male artists known for misogynistic lyrics.

Lauryn Hill and Missy Elliott came along and switched it up again, reigniting discourse about sex-positive empowerment and black feminism, along with emotional tales of love and heartbreak. They showed that hip-hop’s women could achieve commercial success and cross over into mainstream popularity, selling more than 20 million albums combined. Hill’s debut solo album, "The Miseducation of Lauryn Hill," made her the first woman to be nominated in 10 Grammy categories in one year. Elliott has been nominated for a Grammy award more than 20 times, winning five times.

But who are the notable women in mainstream hip-hop today? There is Nicki Minaj who, while often charismatic and occasionally entertaining to watch, admits that she is generally written off by others, particularly older black women. She often touts the commercial accomplishments she’s achieved and claims she's working on behalf of all women -- but not everyone buys her expressions of feminism. There was once a time when you could turn on the radio and hear more than one female MC rhyming over beats by the hottest producers. If you’re into the independent or underground scene, you have probably heard the names Jean Grae, Persia, Amanda Diva and Eternia, but you are not likely to hear their music on mainstream radio stations.

Women have become almost completely invisible in popular hip-hop today, a consequence of the current state of hip-hop culture. Over the years, hip-hop has been bought, sold and mass-produced by people with little authentic connection to the culture’s birth and development. Because of its global appeal, hip-hop became one of America’s most profitable exports. This changed the way hip-hop manifested itself artistically, as money became more of a motivation for many performers than the counterculture rebellion and free expression of the past. No longer are graffiti and break-dancing the popular art forms they once were, and DJs who once spun vinyl and scratched records have become producers who download electronic samples and piece them together on their computers. MCs rarely freestyle or battle anymore, and even their penned lyrics tend to be simplistic.

The more commercial hip-hop becomes, the more image plays a role in whether an artist is deemed marketable. In the entertainment industry, women especially are expected to maintain certain images, and hip-hop music is no different. There was a time when lyrical skills mattered more than physical appearance, but that has changed drastically over the years, especially for women. Men continue to dominate the recording industry, as executives and producers, so women are subject to their decisions, and they go with who and what is "hot" at the moment. In a time when record sales are falling across the board, executives are focusing on people they can bet on being financially successful and, unfortunately, there is little faith in the profitability of female solo artists.

Today, I wish there were a bigger space for women to be part of a culture that once greatly empowered women across the world. I wish women were recognized in the mainstream, not just as novelty “femcees” or the “+1 more” for male artists. I’d like to see greater investment into the promotion of artists like Jean Grae, because there are still important stories to tell and women who need to hear them through one of the few media that speaks directly to their daily experiences. Hip-hop has grown up, but its maturity hasn't benefited everyone equally. It’s time to pass the microphones back to the women without whom hip-hop would not be what it is today.