Other shows may allow multitasking, but Walter White's story deserves your full attention 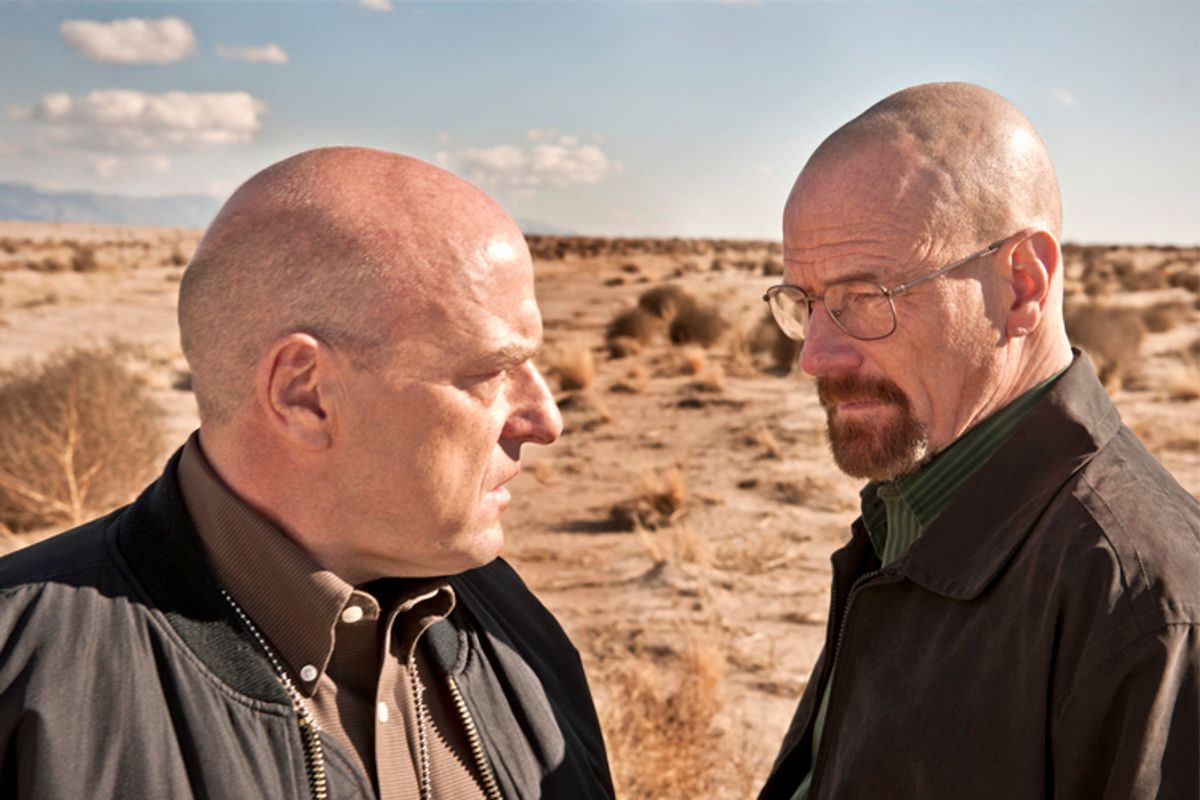 Depending on what you've been reading lately about the futility of multitasking, trying to tackle more than one mental chore at once will make you inefficient, fat and/or potentially unable to keep track of how many shots a basketball player is making while a man in a gorilla suit walks by.

However, it's been posited that "under special circumstances, people can do two different tasks at once without much interference, particularly if the tasks are well-practiced and do not physically conflict with each other." I don't brag about this on my LinkedIn profile, but I have at least three years' experience working my Android Twitter feed and Verizon FIOS TV remote SIMULTANEOUSLY, like a boss. It's heartening to hear I might actually be accomplishing something amazing.

I'm not alone in this twofold talent. According to Nielsen/SocialGuide, 80 percent of U.S. tablet and smartphone owners use their devices while watching TV, with at least 40 percent of them visiting a social network while zoned out in front of the tube. This is good news for the networks, since live-tweeting during TV broadcasts appears to boost ratings and overall viewership.

This also makes sense from a scientific standpoint. Humans are communal creatures. They have a deeply ingrained sociological/biological need to share their outrage at Don Draper's pathological philandering, their ugly-cries when an ABC Bachelorette is unceremoniously dumped, their Hodor jokes. If you're a real pop-psychology nerd, you can break it down even further into how people tweet during different types of shows, as these nifty charts show.

However, in keeping with much of the research on multitasking in general, you might not be as engaged as you should be if you want to get anything meaningful out of either your Twitter feed or your favorite TV show. A Stanford study shows that "chronic media multitaskers" perform poorly on task-switching because they're distracted by their multiple media streams. When their eyes are darting back and forth between their TV screens and their Twitter feeds, they may be "sacrificing performance on the primary task" — in this case, their undivided attention to Walt, Jesse and the rest of the motley New Mexican crew.

Complete engagement isn't usually necessary with these forms of electronic escapism. Watching TV is a passive endeavor to begin with, and I'm not looking for any kind of life-affirming takeaway from either my "Hardcore Pawn" binges or my Drunk Hulk obsession. But a show like "Breaking Bad" — baby, you're different than the rest.

Unlike my other guilty pleasures on the small screen, "Breaking Bad" is all about feeling ... the guilt. Guilt at understanding the motivation behind some of the terrible things these characters do. Guilt at the small Pollyanna-ish part of me still rooting for some redemption for them, though it's pretty obvious they're not going to get it. Guilt at being just one or two bad decisions away from actually becoming Walter White (and if you think this can't happen to you, you haven't been watching the show from the beginning or paying close attention, and either way, somewhere Vince Gilligan is crying).

You might share "moments" with characters on the other shows you watch. You (and understand when I say "you," I mean "we") may have fantasized about winning a cooking competition or owning the pitcher's mound during an MLB game or being thrown in a minimum-security women's prison for being a mule for an international drug cartel. And so you indulge these fantasies, and you tweet about them.

But with "Breaking Bad," you know that you are just as much the danger as Walter White. You feel it. To undergo this rather inexpensive self-examination, you don't want to be spending those critical 60 minutes trying to think up really awful "Breaking Bad" alternatives or clever names for the #BreakingBadBands hashtag. (I did it on my lunch hour — that's different.) You need to be in the characters' heads, watching their body language, scrutinizing the details in the scenery. Last week's unnerving closeup of Dean Norris and Bryan Cranston's eyes during their confrontation in Hank's garage was no accident: We were supposed to be privy to a prolonged stare into their souls so we could see our own — a difficult feat when we've got a Twitter succubus vying for our subconscious.

It's certainly not impossible to tweet during "Breaking Bad." I've done it (sorry — Danny Trejo's head mounted on a turtle required an immediate online group hug), and everyone and their meth-addled mother is going to do it again for the next few weeks as the series winds down. But if you want the full experience, I don't recommend it.