TV characters are invading our lives!

From a "Treme" cookbook to "Breaking Bad" playlists, networks are increasingly acting like TV characters are real 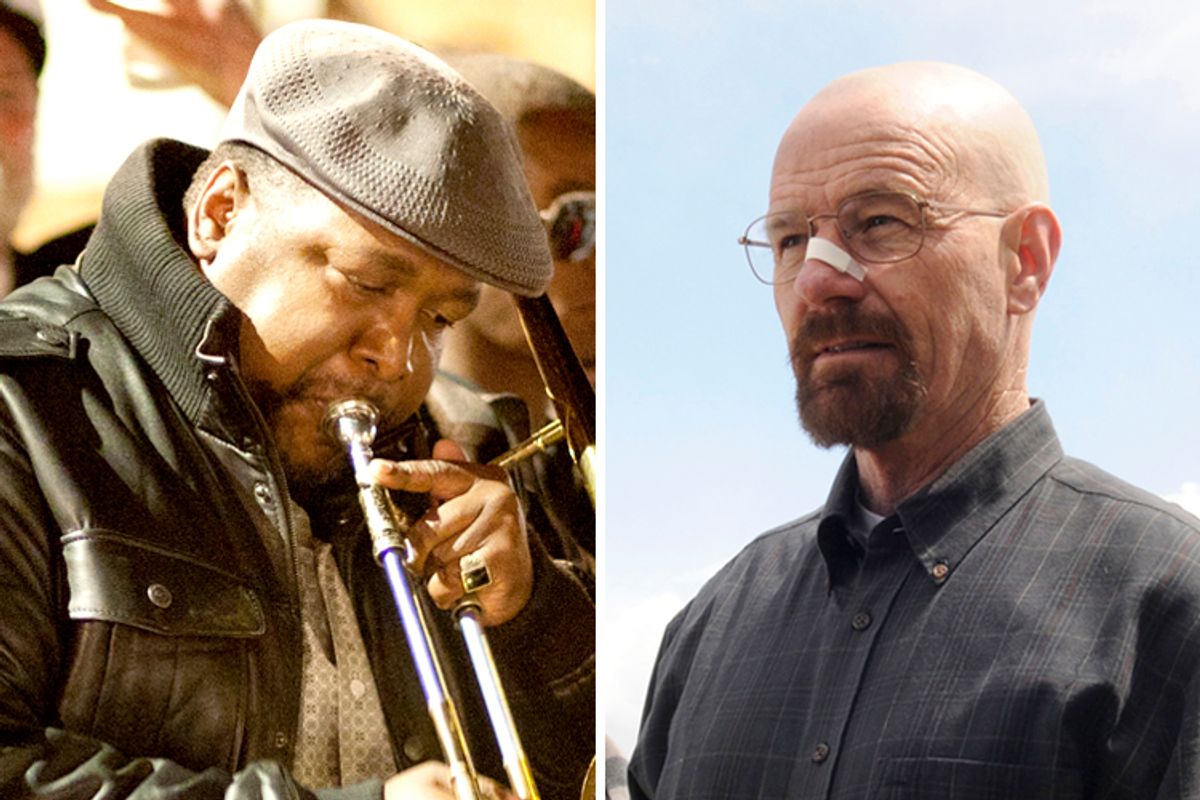 For some reason, I was preparing for the new season of "Breaking Bad" by listening to The Lovin’ Spoonful — I make no apologies — on Spotify, when that overeager voice of the Spotify promoter tumbled out of my headphones. The commercial was for "Breaking Bad" playlists, ones “created” by Walter White, Jesse Pinkman and the like. I laughed, imagining flip phone-carrying Walter White taking a moment from building a methamphetamine dynasty to toss his favorite tunes on a playlist. Then I just kept jamming to “Summer in the City,” not giving it another thought.

After all, television characters bleeding into our “real” lives is part of the media-saturated experience of being alive these days, and it’s certainly part of the modern television-fandom experience. Walter White has a Spotify playlist. Meredith from "The Office" tweets. Randy from "My Name is Earl" had a blog."Arrested Development’"s Oscar Bluth had a blog. Et cetera.

“The second-screen experience is something people in Hollywood are constantly talking about,” says Andy Greenwald, novelist, screenwriter and staff writer for Grantland.com. “Some of them are inspired, some are terrible; but they never really try to make them make sense.”

He’s right. There are so many possibilities to allow characters to flourish off the screen, but rarely are the writers/show-runners involved. Most of the time, it’s “companies … just throwing all sorts of stuff against the wall and seeing what sticks,” according to Jonathan Gray, Ph.D., professor of media and cultural studies at the University of Wisconsin and author of "Show Sold Separately: Promos, Spoilers, and Other Media Paratexts."

Which is disappointing because when the creative teams of shows get involved, it can create an entirely new form of storytelling. Take the July 24-released "Treme: Stories and Recipes from the Heart of New Orleans," written by "Treme" writer (Seasons 2 and 3) Lolis Eric Elie, with a preface by "Treme’"s creator David Simon and a foreword by "Treme" writer and food all-star Anthony Bourdain.

“We were already releasing a CD of the music, so the logistical extension was to do something with food to help tell our story,” says Elie. “New Orleans food culture is a big part of our identity.”

The cookbook is written from the perspective of various characters in "Treme," HBO’s fictionalized account of post-Katrina New Orleans. The show's characters range from a high-end chef to pair of street musicians to a DJ living (mostly) off the kindness of his family, and the cookbook offers recipes from each of these characters, recipes that line up with their histories. “I figured I could do a food autobiography of each character,” Elie says.

Gray called “the idea of Walter White’s playlist” “kind of silly,” and Greenwald points out that while Walter wouldn’t have a playlist, Jesse Pinkman might (though “it would probably be terrible, full of Limp Bizkit and other mook rock.”).  In any case, the "Treme" cookbook may make more sense in the context of its show than the Spotify promotion. “The way David Simon makes television, it’s so immersive a world, and his ability and power as a writer comes from his deep knowledge of a place,” Greenwald says. So while the book idea might be “a little corny … you would believe it.”

The uneven landscape of these tie-ins comes from a convergence of three things.

First, says Greenwald, “the thing that’s made television so exceptional in the past 10 years has been the real creative investment in the writers and the show-runners.” Meanwhile, Gray says, “television audiences have shrunk so much that there’s a real imperative in the way that there didn’t used to be 20 years ago to really hold onto them.” Add in the rise of the Internet and its multitude of possibilities for new marketing attempts, and the stage is set for new kinds of cross-promotion.

Even the way we watch television has changed. Matthew Donahue, Ph.D. and lecturer at the department of popular culture at Bowling Green State University, says we often spend more time reading and talking about television shows today than we do actually watching them. So it only makes sense that we’d see what he calls "the Hannah Montana-ing of contemporary television shows.”

Donahue explains the term: “That show was one of those shows where it was a fictional character, and they built a whole world around her, and they had all these products that tied into Hannah Montana and the show itself.”

While tie-ins aren’t new — Gray points out “tie-ins have a pretty long past if we open it up to the realm of children’s programming” and Donahue still has some cans of J.R. beer (named for J.R. Ewing from the show "Dallas," who, mind you, now has a Twitter account) — fictional characters are bleeding out of the television and into our lives in ways we've never seen before.

Gray says this trend started heavily with NBC in the early ’00s, when the show "Heroes" had an entire mythology online and "My Name is Earl’"s Randy kept a blog. Some of it worked — “'Heroes' was a spectacular experiment. The trans-media things surrounding 'Heroes' was often better than the show.” But some of it, like Randy’s blog, failed spectacularly — “I don’t believe Randy’s literate. There’s no way that dude has a laptop or a smartphone.”

"The Matrix" franchise attempted to tell its story via a trans-media tie-in experiment, offering important aspects of the main story only through video games. The result? The movies caught the ire of critics for not making sense. That’s “the real problem trans-media has run into: how do you tell the story in a way that the people who are consuming all of it and the people who are consuming none of it get anything out of it?” Gray says.

Not to mention some shows don’t lend themselves to it. Gray was thrown off to see a "Mad Men"character tweeting and he aptly states it’s “hard to imagine taking, like, "The Wire’"s Stringer Bell and making him a trans-media character.”

Other shows wouldn’t lose with tie-ins, but they also wouldn’t gain much. Rebecca Housel, Ph.D. and author of several books on popular culture, imagines a show like "The Big Bang Theory" could easily integrate it. “If someone like Sheldon had a Spotify playlist … I would doubt it, but if it would be just the flavor of what I expected Sheldon would listen to, it would be fine if I liked the character.”

Hopefully, television execs will remember that the writers and show-runners are the ones who created this Golden Age of television. And hopefully the execs will allow the second-screen trans-media experience to come from the minds of said writers and show-runners. As Greenwald says, “Things have a life beyond the screen. It’s just a question of who’s controlling it.”

The answer to that question could create a completely new form of storytelling. Or it could just give us updated versions of the cynical marketing strategies of the past fifty years.

Who knows which will happen? I’m sure Will McAvoy will record a podcast about this sometime in the near future.

Travis M. Andrews is a Washington, D.C.-based writer who has written for The Atlantic, Mashable, The Washingtonian and reported for several newspapers throughout his native Louisiana. He's also a contributing editor for NBC's DVICE and a frequent contributor for The Washington Post Express. For more about Travis M. Andrews, go to www.travismandrews.com.