Flash forwards are the new flashbacks 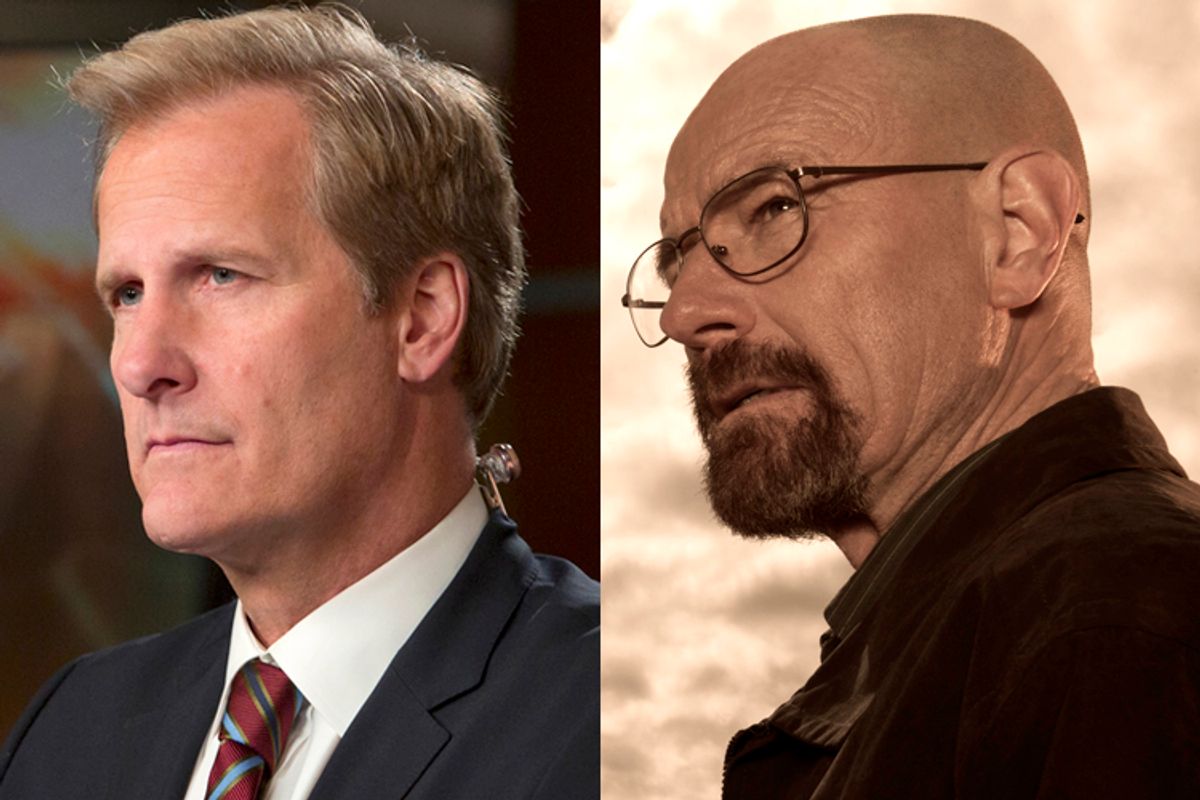 Last night was a good night for payoffs. Maybe you spent the evening savoring another chapter in the descent/comeuppance of current television’s most delectable antihero, meth-cooking megalomaniac Walter White. Or perhaps you lapped up the quippy legalese batted across the ACN conference table by hangdog anchorman Will McAvoy and brook-no-bullshit corporate attorney Rebecca Halliday, played with icy relish by guest star Marcia Gay Harden.

Earlier this summer, AMC’s “Breaking Bad” and HBO’s “The Newsroom” kicked off their fifth-and-a-half and second seasons, respectively, by flashing forward, “Lost”-like, to some unclear and intriguing event further along in the series’ arc. Employing roughly the same setup he rocked with “The Social Network,” “Newsroom” creator Aaron Sorkin plopped us down in a deposition-like setting among stone-faced lawyers eager to pry the uncomfortable truth out of an unwilling subject. From the hot seat, McAvoy dryly deflected Halliday’s questions about some secret military black op and possible government conspiracy as of yet unexplored in the show’s ripped-from-the-headlines first season. Ivy-green associate producer Maggie Jordan (Allison Pill) interrupted the interrogation, fidgety and sporting a choppy red Woody Woodpecker ‘do in lieu of her usual long, lank blond locks. (That’s how we know it’s the future.)

In the far more foreboding of the two openers, “Breaking Bad” gave us Walter White returning to his family residence, now desolated by what might have been fire and illegally inhabited by the cast of “Dogtown and Z-Boys.” White’s beard was full and his familiar bald head now gone. (New hair = passage of time X significant character development.) White retrieved a vial of poison for an undisclosed purpose (I’m thinking murder) and then turned the words “Hello, Carol” into the scariest phrase uttered on television since ... well, since that thing he said last season.

No disrespect to “Mad Men’s” Depression-era Dick Whitman, but the flash forward seems to have replaced the flashback as the favorite bookending technique of some of television’s smartest storytellers. This makes perfect sense if you’re a writer or show runner trying to give viewers the most bang for their buck. The flashback is simply back story. More often than not, a scene or sequence depicting a character’s past is meant to illuminate his or her behavior in the present, i.e., young Dexter witnesses his mother’s brutal killing and grows up all, yunno, murder-y. Or dorky Dick Whitman spends his formative years in a brothel squirming at the foot of world-weary prostitutes and develops into a man-shark with an unusual ability to woo, deceive and ultimately manipulate women. (Let’s table the politics and plausibility of that arc for some other time.) Even when cryptic or vague, flashbacks tend to be expository.

Flash forwards, on the other hand, are more likely to pose puzzles than to answer questions. Where has Walter White been all this time and why does he need the poison? What happened to his house? Why is Will so deceptively defensive about Operation Genoa -- and what is that anyway? What went down in Africa to make perky Maggie Jordan so jittery? What the hell crappy salon is she going to these days? Flash forwards pause viewers at Point A and offer them a tantalizing glimpse of Point C. Suddenly, we’re all circling the water cooler (chat room, fan site, whatever) furiously speculating upon and debating the nature of Point B and all points in between.

Personally, I’m flattered. I think of a good flash forward as a testimony to the intellect of today’s audiences. Already we spend so much time dissecting and obsessing over our favorite shows that the minds behind those programs recognize that it is no longer enough to lead us along a simple narrative thread anymore. These days, they present a challenge: You’re engaged, you know the characters and the story -- figure out how we get here. It’s interactive television at its finest.

Actual resolution remains at a high premium -- even when, like “Breaking Bad,” a show is nearing the end of its run. But clever show runners attempt to keep audiences salivating by meting out small, choice morsels of closure. A few episodes ago on “The Newsroom,” we found out exactly what did happen to Maggie in Africa. Even if the plot twist did feel a little cloying and undercooked, it wasn’t something I would have predicted from the evidence presented.

This week, Sorkin and his crew gave up the entire sinking ship, explaining the full extent of the lawsuit resulting from ACN’s bungled investigation into Operation Genoa and displaying a fraction of every major character’s testimony before Halliday. There was a lot of talking. The witty banter darkened. And stakes of the heads-will-roll variety emerged. There were some interesting revelations: The depths of this so-called crack news team’s ineptitude formed a frightening picture of the pitfalls of broadcast journalism and chasing the news cycle. And there were moments that were simply bizarre, like news division head Charlie Skinner (Sam Waterston) getting smacked across the mouth by his own secret informant for failing to properly chaperone ACN’s intern program. (Don’t worry, that was only half a spoiler -- the funny half.)

In the end, and as always, “Breaking Bad” seemed to do so much more with less. Like me, you’ve probably been waiting for simmering, fracturing Jesse Pinkman, once White’s right hand man, to burst open and explode the contents of his inner turmoil all over the New Mexico landscape. The desperate way he dispensed with his fortune weeks ago, while unnerving and sad, was only a teaser. We all knew he would eventually discover the extent of his former partner’s treachery, yet his reaction was still somehow unexpected. Last night, the clock ran out on our chance to guess the path to Point C. We still don’t know who painted Walter White’s nickname across his living room walls in sickly yellow, or when exactly the skate rats moved in. But, at least, now, we have the answer to one question: Oh, that’s what happened to Walt’s house.