Forget impeachment, this is the really alarming GOP threat 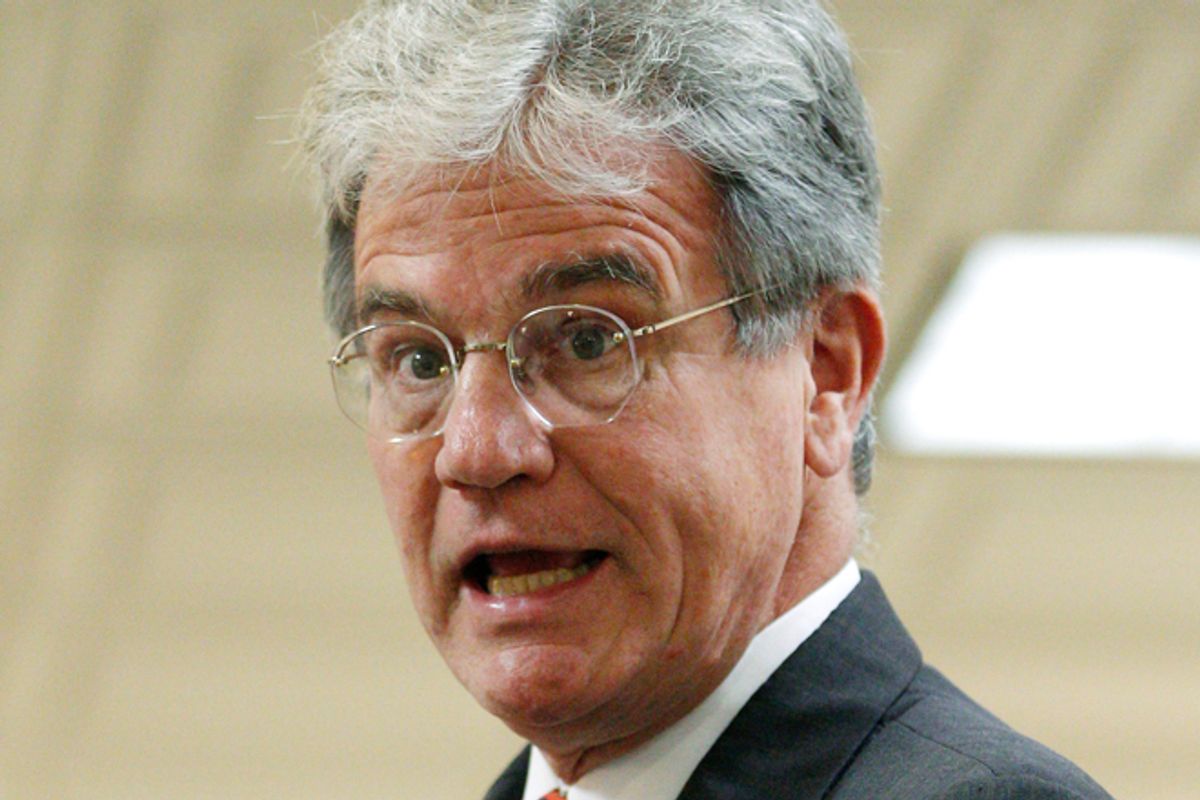 Sen. Tom Coburn, R-Okla., made headlines last week for entertaining the idea, at a meeting with constituents, that President Obama might be impeachable.

But it's what he said about the plausibility of ending Obamacare -- not about the wild fantasy of impeachment -- that deserves real attention.

Coburn was an early and vocal critic of conservative efforts to make funding the government contingent on President Obama agreeing to defund his own healthcare law. He warned conservatives that Obama would never agree to this, the government would shut down, Obamacare implementation would continue apace, Republicans would face backlash, cave and the whole strategy would fail.

That analysis remains correct, and Coburn's conservative bona fides made it easier for other Republicans to line up against Sens. Ted Cruz, R-Texas; Mike Lee, R-Utah; et al., against the defund strategy.

Well, it turns out Coburn isn't so levelheaded when it comes to the debt limit.

On Wednesday, a constituent asked Coburn, "What other alternatives are out there to keep this horrible bill from being implemented on October 1?"

Let me make a point…the one thing that average American agrees with us is the government wastes money. The one thing that the average American agrees with us is that trimming down the size of the federal government is a good thing. That's an 80 percent issue in this country. Restricting the debt limit does both that and repeals the Obamacare. Or at least delay it for a couple years. Because it's an absolute disaster.

Remember, we lost the '12 election because no one knew what we were for, but we also lost the independent voter…because we didn't seem reasonable to them in our approach to governing. People didn't know what we were for. We talked about what we were against. And what we ought to do is put out a message of "here's where we can actually do something that will actually make a difference for our kids. Not only will we have an impact on Obamacare, we'll also have an impact on spending."

You can watch it starting at about minute 41.

The strategic logic here is amazing on a number of levels. First, Coburn identifies the Republicans' two big problems with voters as unreasonableness and a negative agenda, then proposes solving them by threatening to destroy the economy unless Obama agrees to roll back a bunch of stuff, including the Affordable Care Act. He's clearly never heard the "doctor, doctor it hurts when I do this!" joke. And he's a doctor!

He also defines the difference between a positive and negative agenda as a public relations campaign selling the latter as the former. This is the GOP's Field of Dreams: If you destroy something, but tell people you're building it, they will come.

But the most important part is that Coburn either believes this strategy will work, or knows it won't and is willing to pander despite the dangerous potential consequences: default, lender panic, interest rate spikes, economic collapse. Now, I remain confident that Congress will increase the debt limit without incident and without Obama conceding anything significant. But either way the turn is troublesome.

Coburn is one of Obama's closest personal friends in the Senate. But he also has impeccable conservative credentials, and his imprimatur on both strategic and substantive issues carries unusual weight with his colleagues. Where Coburn goes, they often follow. So when he came out against the government shutdown strategy, it implied the existence of a stable core of sanity at the center of the Senate GOP conference, in the same way that the rotation patterns of spiral galaxies imply the existence of dark matter.

Of course, there are plenty of other Republicans in the Senate, and Democrats only need five or six of them to decide they have nothing to gain by replaying the 2011 strategy. We've already seen more than that break ranks to pass immigration reform and confirm several Obama nominees. But if Coburn takes the position that gutting Obamacare is a terrible demand in a government shutdown fight, but a big winner in the debt limit fight, there won't be much room for error.