How Justin Timberlake forced America to love him

The "Mirrors" singer had every reason not to succeed, but managed to bend pop culture to his will 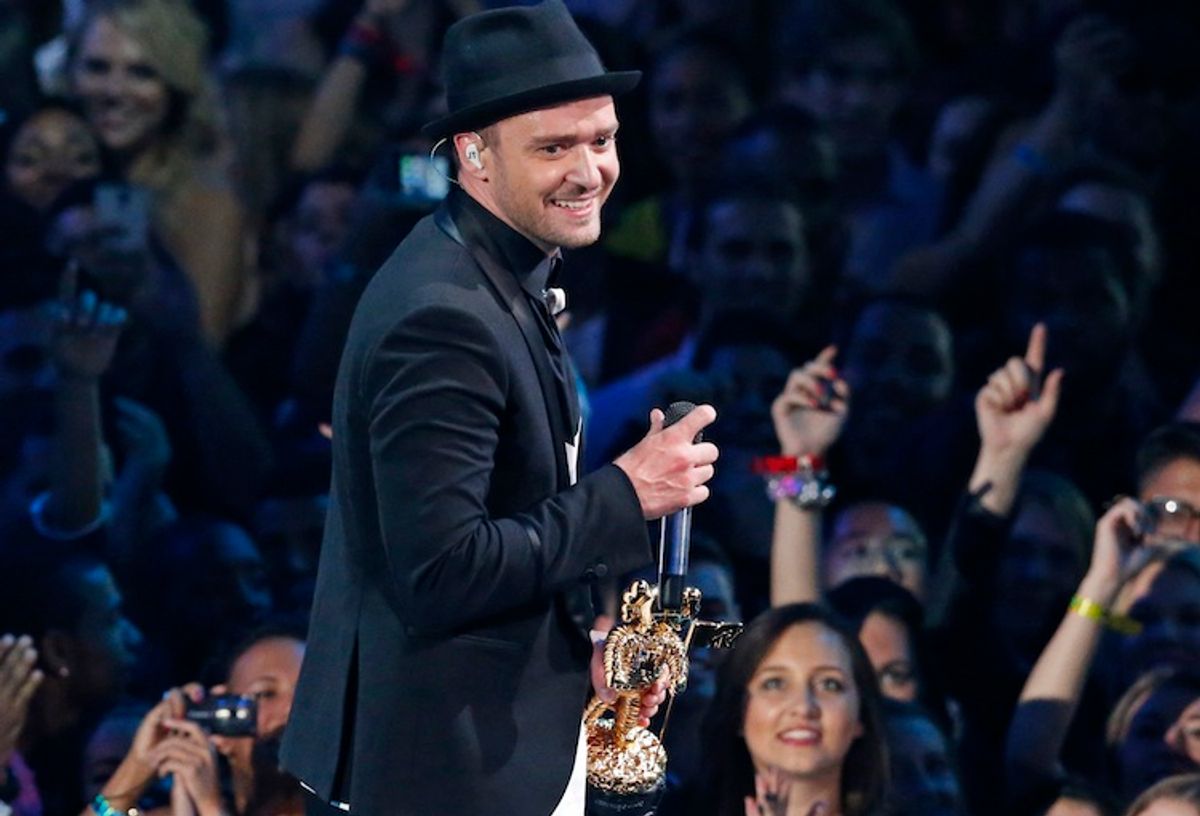 There are very few performers from the 1999 or 2000 iterations of MTV’s Video Music Awards who could conceivably be featured on MTV’s air in 2013. Lauryn Hill is in jail; Kid Rock is at a Tea Party rally somewhere; the Backstreet Boys are reunited, but you don’t hear their praises heralded anywhere; Christina Aguilera is languishing on reality TV; let’s leave the topic of Britney Spears alone.

And yet: One performer from the turn of the century got feted beyond any entertainer's wildest dreams last night at the VMAs; despite the fact that he began his career as one of five in the boy band *NSYNC, Justin Timberlake is now the last – and best – male pop star.

There are so many reasons Timberlake – rewarded last night with a “Michael Jackson Video Vanguard Award” and the Video of the Year trophy in spite of middling success as a video artist specifically, and nearly universally seen as something close to a musical genius – should not be successful. Consider his coming up through a commercially successful but (let’s be honest) sort of doofy boy band; or his participation in the “wardrobe malfunction” incident that effectively ended the career of Janet Jackson, a star many times Timberlake’s wattage; to his seven-year gap between records. And yet it seems as though the kid from *NSYNC has something figured out that everyone else onstage last night can only envy.

Timberlake’s ascent – aside from the VMA gong, Timberlake’s had a full year of positive buzz for his album “The 20/20 Experience,” and before that, years of praise for his acting endeavors – seems unlikely in light of his cohort. When he took the stage for nearly 20 minutes at the VMAs, he allowed his *NSYNC group mates merely a song to share with him. As comedian Kevin Hart noted after the performance, they seemed winded even doing that much.

Timberlake’s rise began in 2002, with his first solo performance in public at the VMAs; the single, “Like I Love You,” was not particularly great and has not gone down in history as one of his most notable hits. And yet what guaranteed Timberlake’s endurance was his persistence and apparent belief that he was a star. His fame feels like an act of will – only a person willing to get a quarter-hour or so of prime-time air as a “career retrospective” three albums into a career would be able to have it.

And his long break from music looks less like a sense of ennui than it does a calculated risk. “He’s certainly about quality control when it comes to his musical output,” said Keith Caulfield, the associate director of charts at Billboard. “He purposely took a step back from making his own music for a while. I can’t speak for him, but I think he wanted to wait until he had something that he wanted to say and the time was right.”

His music, in his early career, had driven musical trends – the squeaky boy-band sound of *NSYNC, the chilly sound producer Timbaland provided on "FutureSex/LoveSounds." "He and Timbaland changed the face of pop music for three or four years," after that record's 2006 release, said Caulfield. After juvenilia like "Like I Love You" and a Super Bowl incident for which Timberlake never quite apologized but was never quite taken to task for, either, the sheer quality and hauteur of "FutureSex/LoveSounds" -- at once, an old-school soul record and the very future of music, all from a 25-year-old -- was a hard act to follow.

And so Timberlake didn't bother to follow it for quite some time, and when he finally released music, did so with an album that sounded out of place and less than trendsetting. Though Caulfield noted that the album dropped at No. 1 on the charts with a huge week of sales, its sound feels entirely out of place in the current pop music. "Mirrors," the song for which Timberlake won Video of the Year, "is not an EDM-laced dubstep pop song," said Caulfield.

And so something about "The 20/20 Experience" -- whose follow-up is due in stores this fall, accompanied by Timberlake's tour -- feels a bit presumptuous. Who is Timberlake, who'd once crooned cheesy tunes with his boy band cohort, to release something so backward-looking -- or to get such a lengthy career retrospective? If Timberlake's confidence faltered for a second, his record would likely be seen as a failure; it's his willingness to go out there and, with a smile on his face, promote an album that sounds nothing like anything else and won't inspire copycats that makes it a hit.

It may be that the time away has helped Timberlake -- certainly, it reminded audiences not to take him for granted. "He has gained credibility through silly things like proving he's got comic chops in [the 'Saturday Night Live' short] 'Dick in a Box' or proving he's got acting chops in 'The Social Network.' Those haven't been musical achievements. They add to his credibility as part of a multi-platform career," said Steve Waksman, a scholar studying rock and pop history at Smith College. It was not ever thus: Waksman noted that Elvis Presley lost credibility, over time, for his attempts to sell out in Hollywood.

But with some early flops forgiven (who cares about "The Love Guru" or "Edison"?), Timberlake feels like a compelling all-platforms celebrity at a time when the ability to move between media is particularly valued; he can do anything he chooses, and manages to make his most idiosyncratic choices seem like part of a grander plan to entertain generally. This, if he has one, is his particular genius -- the ability to have foreseen the coming perceived lack of big, old-fashioned stars (Lady Gaga, Katy Perry, Robin Thicke -- they all have niche constituencies), and his ability to convince the audience that whatever he's providing, moment-to-moment is what they want.

Comparing Timberlake to a pop star who came to prominence at the same time he did is instructive: "Christina Aguilera was a teen sensation; when she was 21, she had to sing about sex; by her mid-20s she was a diva who had to sing jazz songs," said Mathieu Deflem, a professor at the University of South Carolina who's done work on Lady Gaga and the sociology of fame. Timberlake has followed that exact trajectory, with an album entirely about his love of sex and drugs and a more recent one in the very explicit mold of the Rat Pack.

But unlike Aguilera, who's been beset by commercial failure in recent years, Timberlake has managed to force the audience to bend to his sheer force of will; his absence from the music scene, for instance, seemed churlish up until the moment his return seemed like a gift, and then everything was forgiven. It seemed as though the one thing everyone wanted from the VMAs was a full-scale *NSYNC reunion. But consumed with a particular ideal of good taste, Timberlake limited the part his fans wanted to a brief segment of an otherwise high-toned, classy set of well-executed hits. He performed his most recent single in full. It was enough to almost convince the viewers it was what they'd wanted all along.