How our society breeds anxiety, depression and dysfunction

Our belief in “progress” has increased our expectations. The result is mass disappointment 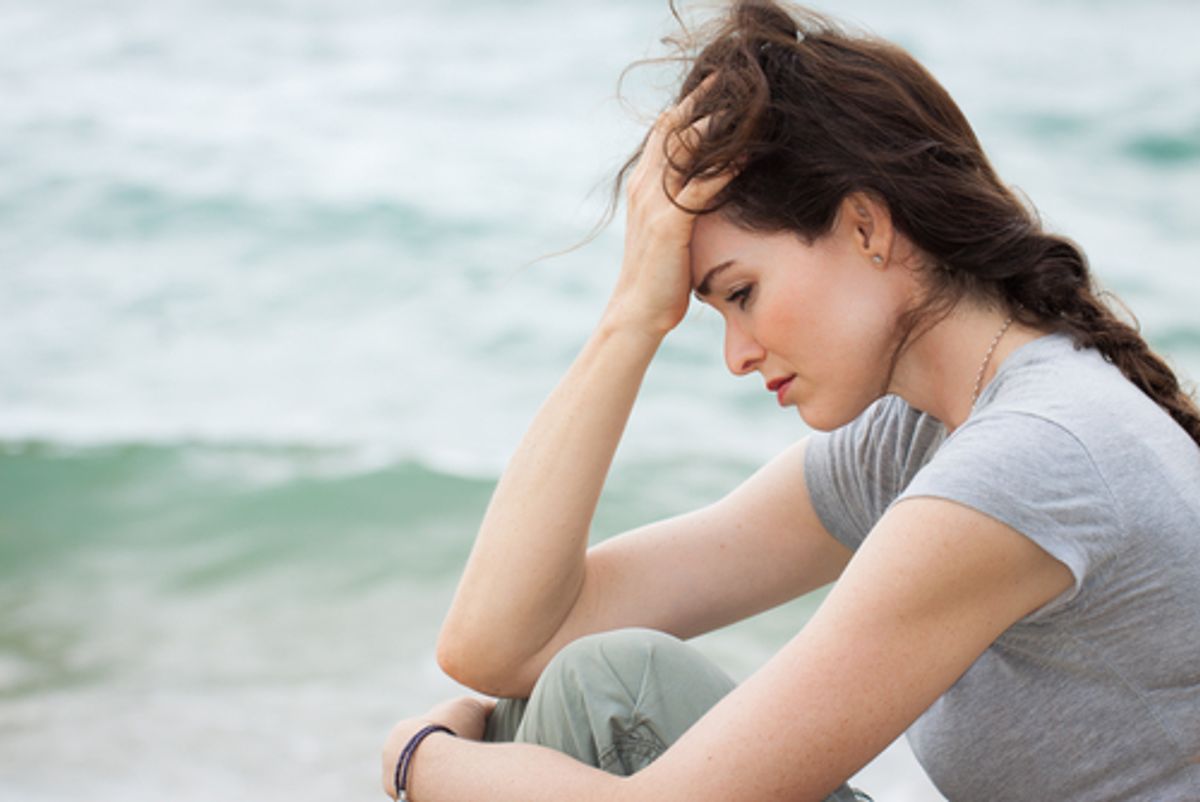 Severe, disabling mental illness has dramatically increased in the United States. “The tally of those who are so disabled by mental disorders that they qualify for Supplemental Security Income (SSI) or Social Security Disability Insurance (SSDI) increased nearly two and a half times between 1987 and 2007 — from one in 184 Americans to one in 76. For children, the rise is even more startling — a thirty-five-fold increase in the same two decades,” as Marcia Angell summarizes in the New York Times Book Review.

Angell also reports that a large survey of adults conducted between 2001 and 2003 sponsored by the National Institute of Mental Health found that at some point in their lives, 46 percent of Americans met the criteria established by the American Psychiatric Association for at least one mental illness.

In 1998, Martin Seligman, then president of the American Psychological Association, spoke to the National Press Club about an American depression epidemic: “We discovered two astonishing things about the rate of depression across the century. The first was there is now between 10 and 20 times as much of it as there was 50 years ago. And the second is that it has become a young person’s problem. When I first started working in depression 30 years ago ... the average age of which the first onset of depression occurred was 29.5 ... Now the average age is between 14 and 15.”

In 2011, the U.S. Centers for Disease Control and Prevention reported that antidepressant use in the United States has increased nearly 400 percent in the last two decades, making antidepressants the most frequently used class of medications by Americans ages 18-44 years. By 2008, 23 percent of women ages 40–59 years were taking antidepressants.

The New York Times reported in 2007 that the number of American children and adolescents treated for bipolar disorder had increased 40-fold between 1994 and 2003. In May 2013, CDC reported in “Mental Health Surveillance Among Children—United States, 2005–2011,” the following: “A total of 13%–20% of children living in the United States experience a mental disorder in a given year, and surveillance during 1994–2011 has shown the prevalence of these conditions to be increasing.”

The first DSM (short for Diagnostic and Statistical Manual of Mental Disorders), psychiatry’s diagnostic bible, was published by the American Psychiatric Association in 1952 and listed 106 disorders (initially called “reactions”). DSM-2 was published in 1968, and the number of disorders increased to 182. DSM-3 was published in 1980, and though homosexuality was dropped from it, diagnoses were expanded to 265, with several child disorders added that would soon become popular, including oppositional defiant disorder (ODD). DSM-4, published in 1994, contained 365 diagnoses.

DSM-5 was published in May 2013. The journal PLOS Medicine reported in 2012, “69% of the DSM-5 task force members report having ties to the pharmaceutical industry.” DSM-5 did not add as many new diagnoses as had previous revisions.

However, DSM-5 has been criticized even by some mainstream psychiatrists such as Allen Frances, the former chairman of the DSM-4 task force, for creating more mental patients by making it easier to qualify for a mental illness, especially for depression. (See Frances’ “Last Plea To DSM-5: Save Grief From the Drug Companies.”) In the last two decades, there have been a slew of books written by journalists and mental health professionals about the lack of science behind the DSM, the over-diagnosis of psychiatric disorders, and the pathologizing of normal behaviors. Even more remarkable than Allen Frances jumping on the DSM-trashing bandwagon has been the harsh critique of DSM-5 by Thomas Insel, director of the National Institute of Mental Health. Insel recently announced that the DSM’s diagnostic categories lack validity, and that “NIMH will be re-orienting its research away from DSM categories.”

Yet another explanation for the epidemic may also be evolving from radical to mainstream, thanks primarily to the efforts of investigative journalist Robert Whitaker and his book "Anatomy of an Epidemic." Whitaker argues that the adverse effects of psychiatric medications are the primary cause of the epidemic. He reports that these drugs, for many patients, cause episodic and moderate emotional and behavioral problems to become severe, chronic and disabling ones.

Examining the scientific literature that now extends over 50 years, Whitaker discovered that while some psychiatric medications for some people may be effective over the short term, these drugs increase the likelihood that a person will become chronically ill over the long term. Whitaker reports, “The scientific literature shows that many patients treated for a milder problem will worsen in response to a drug — say, have a manic episode after taking an antidepressant — and that can lead to a new and more severe diagnosis like bipolar disorder.”

With respect to the dramatic increase of pediatric bipolar disorder, Whitaker points out that, “Once psychiatrists started putting ‘hyperactive’ children on Ritalin, they started to see prepubertal children with manic symptoms. Same thing happened when psychiatrists started prescribing antidepressants to children and teenagers. A significant percentage had manic or hypomanic reactions to the antidepressants.” These children and teenagers are then put on heavier-duty drugs, including drug cocktails, often do not respond favorably to treatment, and deteriorate. That, for Whitaker, is a major reason for the 35-fold increase between 1987 and 2007 of children classified as being disabled by mental disorders.

Whitaker’s explanation for the epidemic has now, even within mainstream psychiatric institutions, entered into the debate; for example, Whitaker was invited by the National Alliance for the Mentally Ill (NAMI) to speak at its 2013 annual convention that took place last June. While Whitaker concludes that psychiatry’s drug-based paradigm of care is the primary cause of the epidemic, he does not rule out the possibility that various cultural factors may also be contributing to the increase in the number of mentally ill.

Mental Illness as Rebellion Against Society

The most deadly criticism one could make of modern civilization is that apart from its man-made crises and catastrophes, is not humanly interesting. . . . In the end, such a civilization can produce only a mass man: incapable of spontaneous, self-directed activities: at best patient, docile, disciplined to monotonous work to an almost pathetic degree. . . . Ultimately such a society produces only two groups of men: the conditioners and the conditioned, the active and passive barbarians. —Lewis Mumford, 1951

Once it was routine for many respected social critics such as Lewis Mumford and Erich Fromm to express concern about the impact of modern civilization on our mental health. But today the idea that the mental illness epidemic is also being caused by a peculiar rebellion against a dehumanizing society has been, for the most part, removed from the mainstream map. When a societal problem grows to become all-encompassing, we often no longer even notice it.

We are disengaged from our jobs and our schooling. Young people are pressured to accrue increasingly large student-loan debt so as to acquire the credentials to get a job, in a profession they often have little enthusiasm for. And increasing numbers of people are completely socially isolated.

Returning to that June 2013 Gallup survey, “The State of the American Workplace: Employee Engagement,” only 30 percent of workers “were engaged, or involved in, enthusiastic about, and committed to their workplace.” In contrast to this “actively engaged group,” 50 percent were “not engaged,” simply going through the motions to get a paycheck, while 20 percent were classified as “actively disengaged,” hating going to work and putting energy into undermining their workplace. Those with higher education levels reported more discontent with their workplace.

How engaged are we with our schooling? Another Gallup poll, “The School Cliff: Student Engagement Drops With Each School Year” (released in January 2013), reported that the longer students stay in school, the less engaged they become. The poll surveyed nearly 500,000 students in 37 states, and found nearly 80 percent of elementary students reported being engaged with school, but by high school, only 40 percent reported being engaged. As the pollsters point out, “If we were doing right by our students and our future, these numbers would be the absolute opposite. For each year a student progresses in school, they should be more engaged, not less.”

Life clearly sucks more than it did a generation ago when it comes to student-loan debt. According to American Student Assistance’s Student Debt Loan Statistics, approximately 37 million Americans have student-loan debt. The majority of borrowers still paying back their loans are in their 30s or older. Approximately two-thirds of students graduate college with some education debt. Nearly 30 percent of college students who take out loans drop out of school, and students who drop out of college before earning a degree struggle most with student loans. As of October 2012, the average amount of student loan debt for the class of 2011 was $26,600, a 5 percent increase from 2010. Only about 37 percent of federal student-loan borrowers between 2004 and 2009 managed to make timely payments without postponing payments or becoming delinquent.

In addition to the pain of jobs, school and debt, there is increasingly more pain of social isolation. A major study in the American Sociological Review in 2006, “Social Isolation in America,” examined Americans’ core network of confidants. The study authors reported that in 1985, 10 percent of Americans said that they had no confidants in their lives, but by 2004, 25 percent of Americans stated they had no confidants in their lives.

Underlying many of psychiatry's nearly 400 diagnoses is the experience of helplessness, hopelessness, passivity, boredom, fear, isolation and dehumanization — culminating in a loss of autonomy and community-connectedness.

Do our societal institutions promote:

Research shows that those labeled with attention-deficit hyperactivity disorder do worst in environments that are boring, repetitive and externally controlled; and that ADHD-labeled children are indistinguishable from “normals” when they have chosen their learning activities and are interested in them. Thus, the standard classroom could not be more imperfectly designed to meet the learning needs of young people who are labeled with ADHD.

As I discussed last year on AlterNet, there is a fundamental bias in mental health professionals for interpreting inattention and noncompliance as a mental disorder. Those with extended schooling have lived for many years in a world where they all pay attention to much that is unstimulating. In this world, one routinely complies with the demands of authorities. Thus for many M.D.s and Ph.D.s, people who rebel against this attentional and behavioral compliance appear to be from another world — a diagnosable one.

The reality is that with enough helplessness, hopelessness, passivity, boredom, fear, isolation and dehumanization, we rebel and refuse to comply. Some of us rebel by becoming inattentive. Others become aggressive. In large numbers we eat, drink and gamble too much. Still others become addicted to drugs, illicit and prescription. Millions work slavishly at dissatisfying jobs, become depressed and passive aggressive, while no small number of us can’t cut it and become homeless and appear crazy.

Feeling misunderstood and uncared about, millions of us ultimately rebel against societal demands; however, given our wherewithal, our rebellions are often passive and disorganized, and routinely futile and self-destructive.