Less popular than Nixon during Watergate: Our potential Syria intervention!

If Obama moves ahead in Syria, he'll have less of the public behind him than in any other military intervention 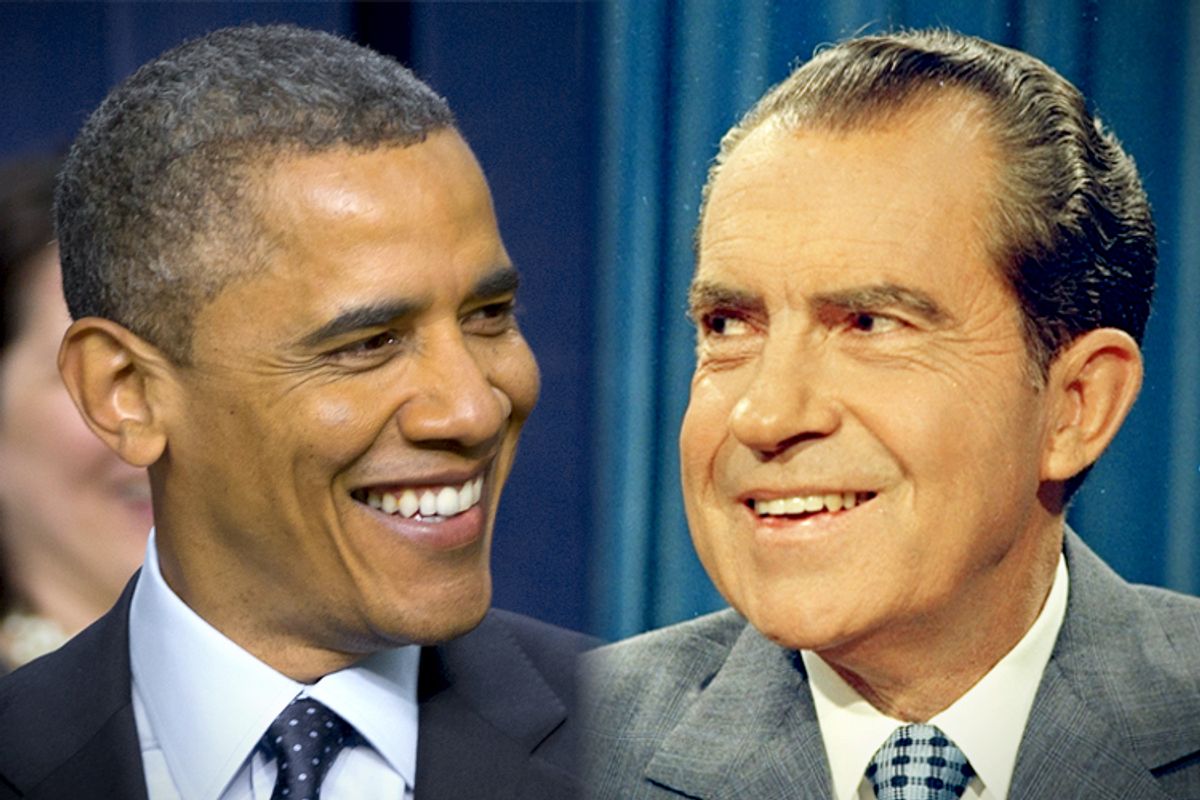 Americans would rather get a proctology exam than have their government intervene in the Syrian civil war, we're led to believe by a new Reuters/Ipsos poll out today, which finds that just 9 percent of Americans support military action. That makes the intervention less popular than communism, BP during the Gulf oil spill, less popular than Richard Nixon during Watergate, less popular than Paris -- and even less popular than Congress, that most hated of American institutions. (Comparing polls like this is not really "scientific," but you get the general idea.)

And yet it looks like the U.S. is hurtling toward intervention, as Secretary of State John Kerry delivered a strong rebuke of the Sryian regime's alleged use of chemical weapons at a press conference this afternoon. Kerry said U.S. intelligence agencies are convinced that the chemical attack that came to light this weekend was committed by pro-regime forces, which he called "inexcusable." "This international norm cannot be violated without consequences," he warned, adding that the administration is still considering its response. "Very forceful Kerry speech. Clear there will be action," foreign policy reporter Laura Rozen tweeted, echoing the consensus of other foreign policy hands.

If the Obama administration does intervene militarily in Syria, it will do so with the least public support of any recent American foreign military adventure. Some pundits bemoan that "petty" domestic politics interfere with American foreign policy, but this is a democracy, after all. And rarely are the people's wishes so clear.

According to the Reuters poll, 25 percent of Americans said they would support U.S. intervention if Syrian President Bashar al-Assad's forces used chemicals to attack civilians, while 46 percent would oppose it, so perhaps the new confirmation from Kerry will sway people's minds. But even assuming the more generous number, Americans are still almost twice as likely to oppose intervention as to support it.

Just 27 percent of Americans said they support Obama's decision to send arms to some Syrian rebels, while only 11 percent said the U.S. should do more. A paltry 12 and 11 percent support airstrikes and a "no-fly" zone, respectively. A massive 89 percent say we should not help the rebels.

Historically, this is a major anomaly, as Americans are generally pretty supportive of using U.S. military might to stop genocide or help oppressed people abroad.

Days before the 2011 military intervention into Libya, about half of respondents told ABC News/Washington Post pollsters that they'd support the U.S. creating a no-fly zone in the country. Pew found about the same results, with 44 percent saying they'd support a no-fly zone. A majority -- 53 percent -- told CNN that they'd favor "sending arms and supplies to the people who are fighting to remove Gadhafi from power."

Polls from the weeks leading up to the war in Iraq found near-majority support for unilateral military intervention, with a Newsweek poll from early March 2003 finding that a whopping 85 percent of Americans supported military action if the "United States joined together with its major allies with the full support of the United Nations Security Council."

In 2004, 57 percent of American said the U.S. should contribute troops to a U.N.-led military intervention into the civil war in the Darfur region of Sudan.

After 9/11, in the lead-up to the war in Afghanistan, Gallup ran headlines like "Overwhelming Support for War Continues" as it found that Americans favored the use of ground troops in the country 80 to 18 percent.

In the 1990s humanitarian interventions, Americans were more hesitant, but still generally supportive of military action, if by narrow margins. According to Gallup, the Kosovo intervention in 1999 found modest support at 51 percent in favor versus 45 percent opposed, while the 1992 intervention in the Balkans had a 10 point margin of support.

When asked if they would support military intervention into Rwanada if a U.N. panel determined the killings there constituted genocide, 80 percent of Americans said they would. When the U.S. did ultimately send troops (too late to stop the genocide), the public was supportive, with a CBS News poll finding that 63 percent said they approved of the decision.

Smaller interventions in Haiti and Grenada in 1994 also gained support from narrow majorities of Americans, according to Gallup.

So what's changed? It's impossible to know for sure, but a safe guess is that the bloody and seemingly pointless wars in Iraq and Afghanistan have soured Americans on the prospect of foreign military intervention, even if for noble goals. The U.S. lost 18 special forces operators in the so-called Black Hawk down episode in Somalia, with another 73 wounded, and that event was seen as indefinitely spoiling Americans' appetite for humanitarian intervention. Compare that to the 4,500 American soldiers killed in Iraq, and the more than 2,200 (and, sadly, counting) in Afghanistan.

Libya at least had a more clear goal as to what was more militarily feasible, and even then it may have backfired in the public's mind after the Benghazi attack. Syria is a mess, with no palatable alternative to Assad available. Can you blame Americans for not wanting to get involved in another conflict, especially when the goal is so undefined and U.S. interest murky?