No, smartphones are not destroying the culture 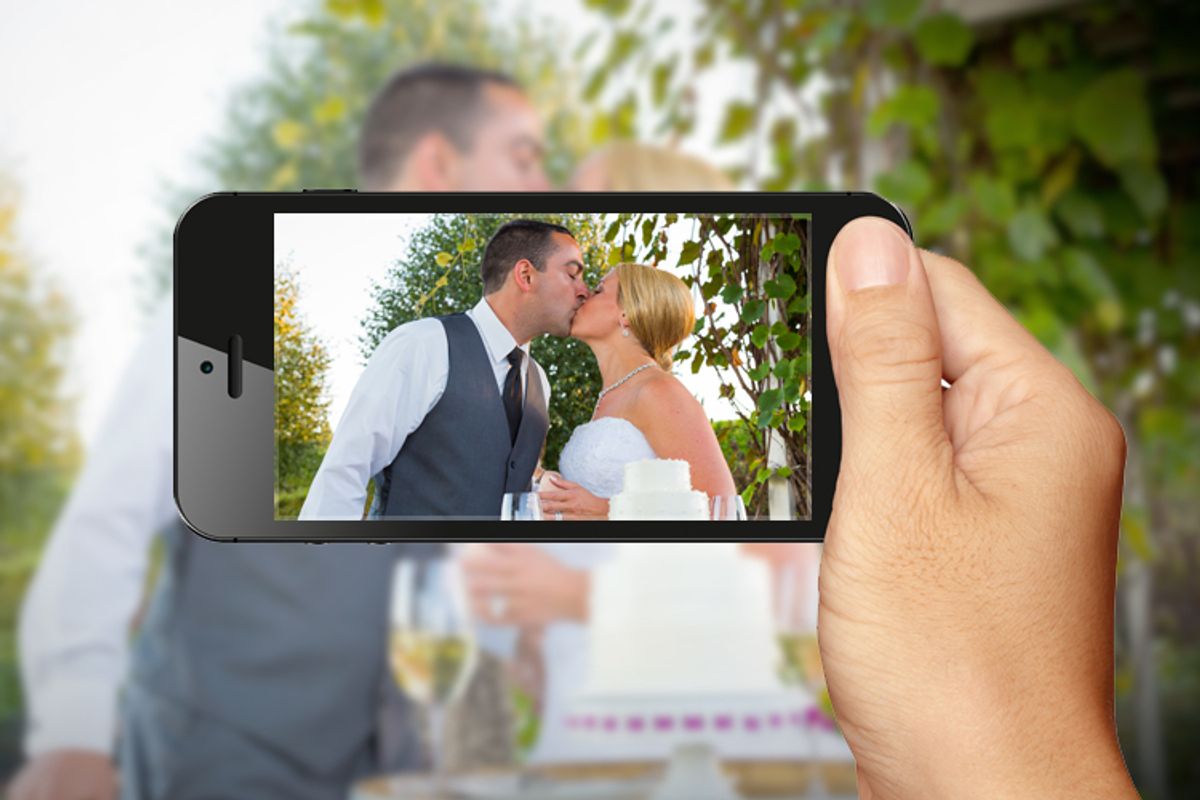 Across the dining room table, my sister and my cousin's best man were goading each other into a sing-off. The night before, during the wedding, the best man, a professional singer from Philadelphia, had blown our minds with his operatic rendition of Andrea Bocelli's half of Celine Dion's "The Prayer." Now he was encouraging my sister to sing one of her favorite Irish folk tunes.

"Let's have a concert!" I urged. The cry was immediately taken up by other members of the wedding party, including a healthy contingent of the Filipino family my cousin had just married into. We migrated to the living room, where a baby grand piano -- and dozens of smartphones -- awaited.

Oh god. Cue the smartphones-are-killing-culture rant! It would be soooooo easy. All weekend long, abundant opportunities for decrying the death of real social interaction had presented themselves. During the wedding reception there was a moment when it seemed like more people were using their phones to video the dancing than actually daring to step out on the floor. I saw Facebook posts shared between people sitting at the same table. And I was as guilty as anyone: The temptation to check to see how many people had liked that oh-so-cute photo of family members I posted just before the wedding proved irresistible, all night long.

And now here we were, lounging by the piano, mobile devices in hand, grabbing for more simultaneous bandwidth than my old southern New Hampshire family home had ever witnessed before. You could hear the ancestors groaning. If even a wedding cannot defend against the digital onslaught, what hope was there for the rest of the culture?

But no. That's not what happened. That isn't where we ended up. A strange and wonderful thing transpired in the living room that evening. We went all folk smartphone. We used our devices to create community and inspire conviviality. And we sang every last goddamn verse of "American Pie."

Yeah, so at first glance it might have seemed outrageous that the bride and groom were fiddling with their phones in the moments between the best man's performance of a tune of his own creation on the piano and my sister's vivacious delivery of a bawdy tale of young Celtic female lust that might not have been appropriate for some of the younger cousins. But guess what? The bride was searching for the lyrics to Hairspray's "Can't Stop the Beat" while the groom was loading up the instrumental backing track to the same song on his phone.

Cue the Hairspray madness! Remember how cool it was when you realized that you could find the lyrics to any song by searching for them on the Internet? Well it's even cooler when you realize you can also find backing tracks to thousands of popular songs on YouTube and create your own karaoke frenzy any time you want. And who doesn't want to snap a few pics or capture some video of a new bride shimmying to "And so I'm going to shake and shimmy it"?

Maybe it might be more "authentic" to have the room filled with banjo-pickers and fiddle-players, while laying down an outright ban on digitally downloaded cheat sheets for those who can't remember the melody or the lyrics to a song. I can certainly imagine a lot of long, boring arguments about how singing along to pre-recorded instrumental backing tracks is a shallow imitation of "real" musicianship. But as I surveyed this room of giggling Googlers I realized I was witnessing what one might call, for better or worse, the technologically mediated democratization of the singalong. Yeah man, we disrupted the singalong.

That sounds silly. But the vast majority of people in that room could not carry a tune like the best man or my sister. And that can be intimidating. But once you smash through the karaoke barrier, all bets are off. My son is not the kind of teenager I am accustomed to hearing break out in song at public gatherings. But he's got a new smartphone and he figured he could play this game as well as the cousin with whom he had been discussing video game strategy just a few minutes before. So he dialed up the lyrics to "American Pie" and delivered a virtuoso channeling of Don McLean. "No angel born in hell could break that Satan's spell!" brought down the house. Everyone joined in for the chorus, of course, but my son would never have ventured the entire song without all six verses laid out before him on the small screen.

I cannot deny that this particular evening was helped along by a powerful dose of Filipino-infused extrovertish energy encouraging everyone to let their inner diva out to play. I can't guarantee that this alchemy is easily repeatable. But I am heartened. I learned a lesson that night that assuaged some of my anxieties about how our overwhelming plunge into 24/7 digitally downloaded lives is shaping 21st century culture. Nearly every person in that room had a mobile device in their hands or nearby. But these tools were being used to find excuses to sing, dance and laugh together -- and to capture that hilarity for posterity. It was self-evident: The smartphone was just as much a social lubricant as the champagne.

The growth of smart mobile device market penetration has exploded so rapidly in the last two years that we have ample reason to be suspicious of the future we are careening into. We haven't had anywhere near the necessary time to figure out the correct etiquette or Ten Commandments to guide us through this shift. Is it stupid that I feel rude when I find myself staring at my phone when I get to the cashier at the grocery store? Where's the rulebook?

When my plane landed in San Francisco last night (three hours late), it was more than a little spooky to watch how my son, daughter and myself all activated our phones the moment after the wheels touched down, and picked up conversations that had been cut off seven hours earlier. We were phone-zombies, staring into the small screens from the gate to the baggage claim. And so was everyone else.

But just 24 hours earlier, I was partying with another horde of phone-zombies, tapping into an inexhaustible online mine of pop culture that we were mixing and mashing and singing over and dancing under. We are making up the rules as we go along, and surprise, surprise! We are discovering how to exploit these devices to tap deep needs for social interaction. I don't think there was a single person in that gathering Saturday night who didn't think, wow, that was really fun. Let's do it again!

So go ahead: Dial up that backing track and disrupt that singalong. You know you want to.