The school segregation battle isn't over 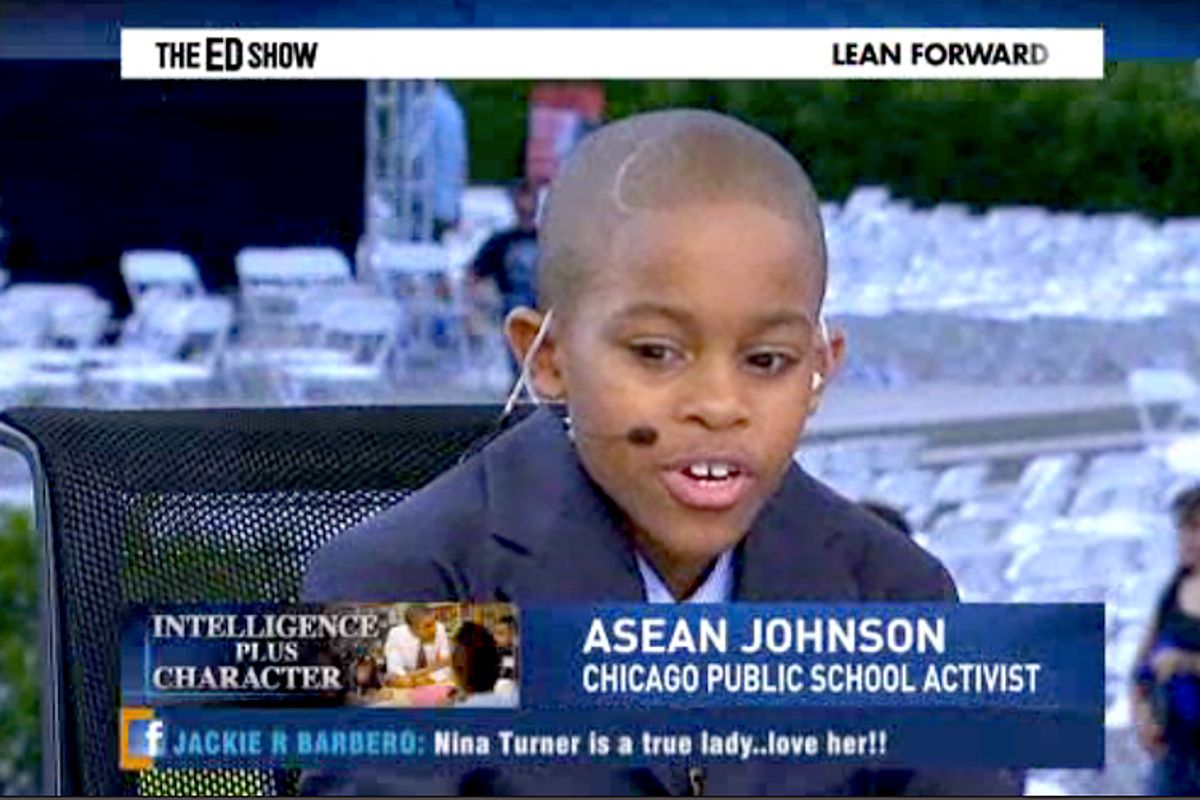 It was hard to know what to expect of the 50th Anniversary of the March on Washington on Saturday. Commemorative events always fall short of the original article. They seek to replicate a zeitgeist it is nearly impossible to recapture, and the 1963 March is particularly inimitable, even as the problems it railed against -- race-based violence and discrimination, un- and underemployment, inequality, and voting rights -- persist today. Though several of Saturday's speakers admonished participants not to view the day's activity as a commemoration but instead as active marching orders, for many, the event had the staid, distant feel of the former and little of the latter's urgency. One of few exceptions was nine-year-old Asean Johnson, whose brief comments packed quite a wallop, amid a day peppered with detached philosophizing.

We heard speeches that ranged from flat-toned and benign to fiery and impassioned. Among those in the fiery category were remarks delivered by Rep. John Lewis, who at age 23 was the youngest speaker at the original March and who is today that March's only surviving speaker. No one came close to entering the rarefied air that Martin Luther King Jr.'s booming tenor occupied with "I Have a Dream." Certainly, no one expected to -- not even King's son, Martin Luther King III, who delivered the penultimate speech of the day.

In fact, King III's rhetoric felt warmed over at best, an echoing mimicry of a bygone era. Unlike Rep. Lewis, Southern Christian Leadership Conference founder Rev. Joseph Lowery, or Myrlie Evers-Williams, whose participation and investment in the original March legitimized the tone of their comments, King III belongs more to a post-'60s Civil Rights generation and conversation. He and his siblings are the most literal inheritors of their father’s work and accomplishments. Instead of leaning on the laurels of that legacy, he should be using his unique vantage to reinvigorate the civil rights movement by attacking the issues central to it, in fresh and innovative ways.

At this point, this is a tack 55-year-old King III is not likely to take. Fresh and innovative response to the civil rights issues of the day will clearly be left to younger successors. Enter nine-year-old Asean Johnson, a Chicagoan education justice activist who appeared with King III on "The Melissa Harris-Perry Show" the day after the commemorative March. Johnson’s own remarks on Saturday made him the new “youngest speaker at the March on Washington.” Said Harris-Perry of Asean, who said he hoped to become a great man like Dr. King Jr. someday: “I’m pretty sure you're a great man already. I'm pretty sure we don't have to wait for you to grow up to be a great man. You're a great man right now.”

Perhaps you’re already familiar with Asean Johnson as a public presence. His comments earlier this year at a protest rally against the closing of several predominantly black Chicago public schools went viral on YouTube. In May and in the months since, Johnson has distinguished himself as an important political voice in public education discourse. If that sounds strange -- the idea of a child whose age hasn’t even hit double digits being one of the more valuable contributors to the national conversation about school justice -- it’s probably because black child activists with a public platform are few and far between.

There could be several reasons for this, but one that immediately springs to mind is directly related to the ‘60s civil rights era. The most iconic black children we remember from that movement became so through death, as in the case of the four little girls in the 1963 16th Street Baptist Church bombing; through harassment and bullying as in the case of Ruby Bridges and other black students who bravely desegregated schools; or through the death of their martyred, freedom-fighting parents.

In the ‘60s, conventional wisdom necessitated black children keeping a low profile. Teenagers, already prone to rebellion by typical adolescent unrest, were likely to take a vocal proactive stance, aware of the high risk awaiting them. But nine-year-olds like Asean Johnson were encouraged to be seen and not heard.

It’s no wonder then that on "Melissa Harris-Perry," King III called Asean’s speech one of the most memorable moments he experienced at the event. It marks a changing of the guard.

Today, it has become more common for children to be vocally engaged in the work of activism, when they are directly susceptible to the blows of injustice. For Asean, public speaking isn’t about being a novelty act or a crowd-enlivener. He isn’t a tiny little orator, dressed up in a suit and tie, parroting the intonation of an old regime. He’s simply a kid who, after transferring to Marcus Garvey Elementary on the South Side of Chicago and winning a class presidency there, didn’t want to see his new friends and treasured teachers permanently displaced.

Johnson has had to learn quite early about the various ways in which racial discrimination impacts public schools -- and unlike 1960s children, who knew nothing of black-and-white school integration, Johnson understands that today’s discriminatory school closings which disproportionately impact low-income and predominantly black children can no longer be called what they so obviously are.

Earlier this month, U.S. District Court Judge John Z. Lee ruled that the closing of 49 Chicago Public Schools would stand, rejecting the assertion that black and disabled students’ civil rights would be violated. While these closings have largely been attributed to budgeting and space issues, the racial link is undeniable -- to the students, their parents, and their communities, if not the justice system.

Asean Johnson attested to this in his interview with Harris-Perry: “My most important message [at the March] was to let the people know that Chicago school closings are very dangerous and they are not helpful to the community because you're going to have a lot of kids very heartbroken to not go back to their public school.”

Forty-eight years since the Civil Rights Act called for desegregation, the request of black children remains the same: quality education for all, in schools that are local to their communities. But with voices like Asean’s in 2013 raised in solidarity with older youth like the Dream Defenders, the Black Youth Project 100, and others, the cry for justice is amplified and re-energized. This generation is determined to be both seen and clearly, loudly heard.