“She fired a staffer with seven children, the eighth on the way, on Christmas Eve” 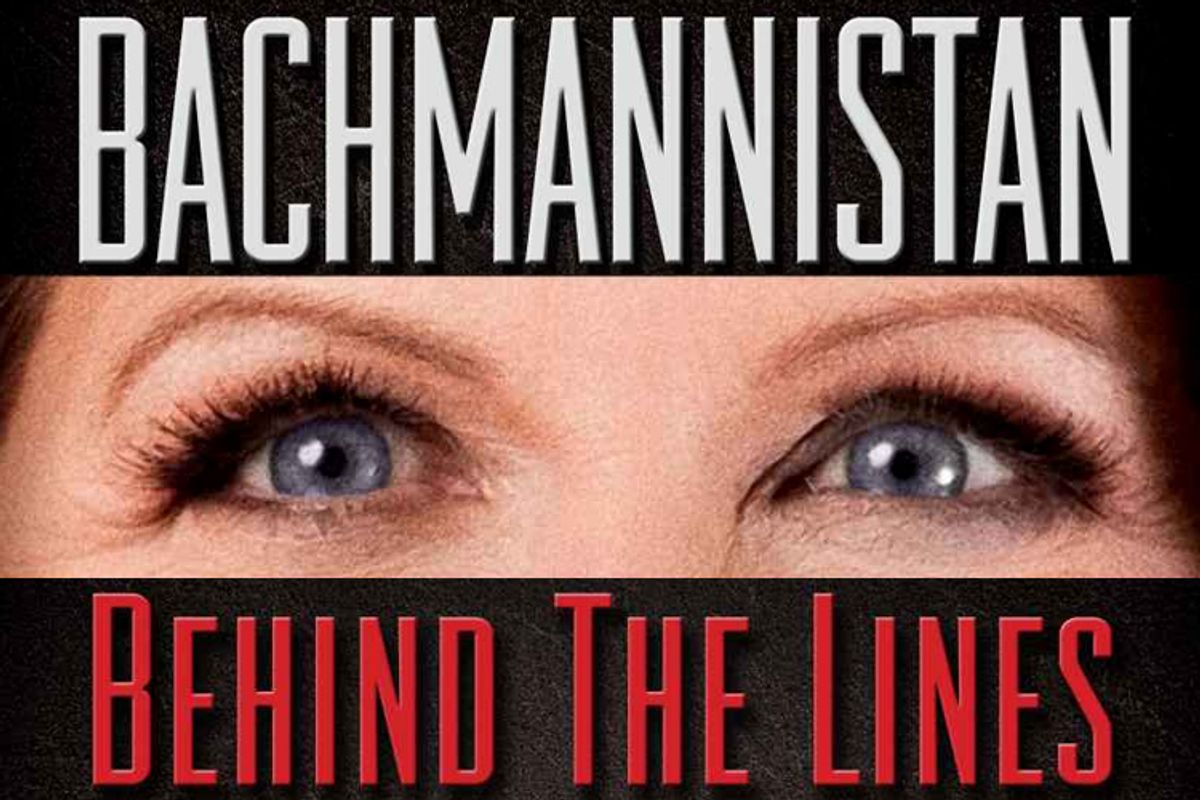 A new book co-written by a former senior staffer on Michele Bachmann's presidential campaign alleges that the conservative congresswoman is a fake Christian diva who fires pregnant staffers on Christmas Eve and takes advantage of her devoted supporters, when not being taken advantage of by the political consultants she hired.

Published on Amazon for Kindle late last night, "Bachmannnistan: Behind the Lines, a Report From the Inside" bills itself as "the explosive first tell all book about the secretive world of Michele Bachmann ... immoral, illegal and unethical."

It paints Peter Waldron, who was Bachmann's field coordinator and evangelical outreach lead (and who also happens to have co-written the book), as the nearly lone island of virtue in a sea of money-grubbing advisers and sinister politicians willing to break the law to get what they want. At the center is Bachmann, whom Bachmannistan portrays as alternatively clueless or cruel, but above all: "Hard as nails, vicious, self-centered, phony, in it for herself.”

The book's other author, John Gilmore, says: "This book is to the grassroots what 'This Town' is to the political and consulting class. That sounds self-serving but I'm not really trying to be." (The book is written in third person, which leads to some awkward moments of Waldron praising himself -- at one point he compares himself to Edward Snowden -- by writing things like, “There was that series of dirty tricks he was ordered to undertake, and which he executed to brilliant effect with no fingerprints.”)

Before we go any further, we should again reiterate that these are allegations made by the author. The campaign is without a doubt facing ethics investigations, launched in part by complaints that Waldron himself filed with various authorities, but the details and dialogue are from Waldron's perspective only, and he obviously has an interest in presenting himself in a certain way.

There's the fact that he was arrested in Uganda on terrorism charges, an incident "Bachmannnistan" dismisses as "a mistake" (the congresswoman does has "exceedingly poor judgement," Waldron write about her personnel decisions, though not about his own hiring, of course). "For those readers who before this book had never heard of him, Peter Waldron would be tagged as some kook who tried to overthrow the Ugandan government in 2006 with two AK-47’s and rapid fire Bible speak. A cubicle-bound Dilbert life he has not led. But the tag on him as some ersatz revolutionary in simply incorrect," the book explains.

We read the whole book today so you don't have to, and here are some of the juiciest allegations:

"He instructed her to get off of their bed and go to the full-length mirror in the bedroom. 'If you can look at yourself and say it, then you are ready to run and you should,' he explained. She listened, nodding internally and then got off the bed. Traversing the bedroom, she stood in front of the mirror.
Said Michele Bachmann, looking at herself: 'I am President of the United States of America.'"

As we said, these are allegations. James Pollack, who was the finance chairman for Bachmann's presidential campaign dismissed the book as "fiction" in a statement:

"This former staffer with an ax to grind has been peddling these same reckless falsehoods, half-truths, and innuendos for well over a year in his attempt to maliciously smear Congresswoman Bachmann's name. Doing this to someone of her immense character is despicable. Whether his motivation is an attempt to selfishly get 15 minutes of fame, or reap an economic benefit on this e-book, it is unconscionable. Congresswoman Bachmann always complied with all laws and regulations during her Presidential Campaign. To the extent this e-book claims otherwise, it lacks credibility, and is thus a reprehensible piece of fiction."

We'll probably learn more as the investigation before the House Ethics Committee works its way through the process, and perhaps from the reported FBI investigation in campaign finance irregularities. In any case, it's all a bit of a footnote now that Bachmann has said she's retiring.