"Breast is best" is about race too 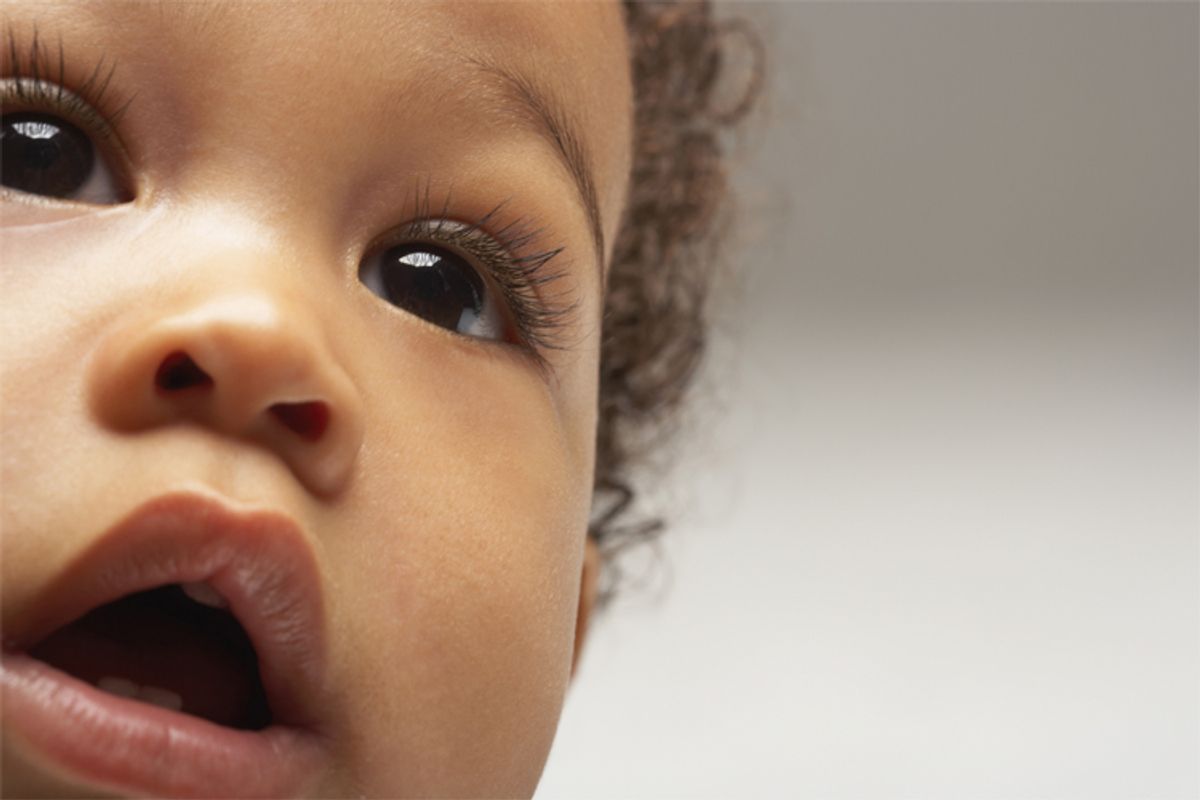 In mainstream mommy discourse, breast vs. formula can quickly devolve into competition, as yet another way to assert oneself as a superior mother. Even among breast-feeding moms, length at the breast is used as a yardstick of better mothering.

But as someone who's spent the last year growing and curating Beyond Baby Mamas, a space for single mothers of color to openly share their experiences as parents without worrying about defending themselves against the George Wills of the world, I am beginning to understand more acutely the importance of and impediments to breast-feeding for black single mothers.

In a Beyond Baby Mamas Twitter chat yesterday in honor of Black Breastfeeding Week, never once did anyone insinuate that breast-feeding made them more engaged and concerned mothers than those who could not or did not.

It was understood that for the single mother, the ability to breast-feed at length in a low-stress environment and with the support of at least one other caring adult is a luxury. Many of our single mothers breast-fed. Some did so within a marriage or live-in partnership that has since dissolved. Some did so around hectic work schedules and without maternity leave. Several began and had to wean long before they wanted to, due to medical issues or time constraints. Many of those felt loss, depression or guilt.

This is a delicate discussion -- one that, even as a mothering advocate, I've always been reluctant to enter.

I didn't breast-feed my daughter. I'd planned to. The night she was born, my mother slept beside me in a knock-off Lazy Boy meant for a co-parent. Nurses swanned in and out, checking and rechecking to see if I wanted the baby to sleep in the nursery overnight while I recovered. I refused three times. She was so quiet and defenseless and beautiful. I couldn't fathom parting with her -- and what if she got hungry?

"You won't be parting with her for 18 years," one nurse quipped. "These are the last nights of your life when you'll have all the help you do right now."

My mother and I exchanged a glance. She was right: nurses, residents, lactation specialists, my obstetrician -- everyone who was paid to be kind and solicitous, everyone who knew what they were doing, would disappear as soon as I was discharged. I had exactly two nights of this level of attentiveness. Two nights to "recover."

"Have you tried to nurse?" the quipping nurse asked.

I didn't think I'd have to try. I'd assumed that as soon as the breast was exposed, the baby would wrap her lips around the areola and suckle. All I'd ever heard about breast-feeding was how natural it was, how instinctive. Suddenly, mother and child would look at each other, knowing what to do.

But in many ways, that night and in the nights that have followed, I've looked at her and known nothing.

The nurse understood without me having to admit that the baby hadn't latched. She tried to help, positioning the baby in the crook of my right arm "like a football," and telling me to lean toward her and lift her toward me. We watched and waited for my daughter's mouth to root around till it found its target. She tried, but even when she got on, she wouldn't stay. The nurse told me a lactation specialist would visit the next day and teach me other latching techniques. Then she scooped up my daughter and took her away.

I didn't really sleep. Like most parents, I haven't really slept since I met the kid. I kept listening for her in the nursery down the hall from my room, wondering if she needed to eat. Everyone assured me she'd be fine for quite a while before she felt truly hungry.

In the morning, as promised, a lactation specialist came. The same routine as the night before commenced. In fact, the only nurse who could get my daughter to latch was a gruff one who shoved the baby's entire face into my breast and held it there until she began to suck.

This went on for days. In the meantime, I'd started to pump, giving the baby whatever colostrum came out, in a bottle. The hospital arranged for a specialist to do a home visit within days of hospital discharge. She made two attempts to get the baby to latch before saying, "Yeah. Looks like she just doesn't want to latch ..."

By then, my breasts were becoming engorged with milk. My mother tried helping by retrying the holds and techniques the nurses and specialists had used. But nothing worked. My daughter's cries grew hungrier and more shrill. A decision needed to be made, before my milk dried up altogether.

Because I felt rushed and helpless, because I had only my mother with me and she was as fresh out of ideas as I, and because I had to return to work as an adjunct English professor four weeks post-delivery, I decided to pump exclusively, using fenugreek tablets to stimulate milk production. I continued to pump for four months, supplementing with formula when the baby's appetite outstripped my milk. By six months, my body stopped producing milk altogether.

I tried. But without maternity leave, a consistent system of support, or even a clear idea of what to do amid my newborn's shrieking frustration and my own, breasfeeding just didn't work out for me.

It isn't a story I readily tell -- and I haven't told it all here. I haven't mentioned, for instance, how manic those first days felt, how quickly I kept chirping, "I'm OK! I'm not sad! I'm fine!" because I thought it would keep me from descending into darkness and because I didn't think I "deserved" to call what I felt postpartum depression. Something about "making my bed and lying in it," a common refrain lobbed at unmarried mothers, especially black ones. I was expected to weather this as close to on my own as possible, right? Any single motherhood snag required a quick pivot. So I pivoted.

The cultural expectation that black single mothers keep silent about their vulnerabilities, lest they offer themselves up for relentless criticism, is one that occasionally bleeds into breast-feeding discourse. Though there are many reasons for the racial disparity in mothers who breast-feed (75 percent of white women and 58.9 percent of black women), one of the most often cited is lack of awareness about breast-feeding's benefits. But when white breast-feeding advocates talk to black moms about breast-feeding, they often come in talking before listening. Lactation consulting should absolutely be an educational experience, but not only in the direction of consultant to client. Advocates must listen to the reasons women face challenges, without assuming that because a mother is black, she's been bombarded with myths. Reasons are often more complex and varied -- and when they are, having a consultant (of any race) who's willing to listen in a nonjudgmental way is paramount.

These are some of the concerns Black Breastfeeding Week was founded to express. But as with any celebration specific to black cultures, the occasion has been marked with white criticism, this time from white moms and breast-feeding advocates who call black mothers "having their own week" "divisive" and "unnecessary" (see some of the comments from white commenters on the Facebook page for the popular mommy blog the Leaky Boob). The week's co-founder Kimberly Allers Seals wrote a fantastic piece yesterday listing the top five reasons black moms' conversation around breast-feeding is distinct enough to warrant its own space. I'd encourage those who genuinely want context for Black Breastfeeding Week's existence to read, share and discuss it. Also be sure to read the comments where, even after being presented with very solid evidence of distinctions between black and white breast-feeding experiences, at least one white reader refuses to acknowledge them.

Black Breastfeeding Week is meant to address cases like mine, cases like those of many working single mothers, and mothers of all relationship statuses who feel undersupported and undereducated about their options. World Breastfeeding Month has been celebrated since August began. All month long, women have been given the space to share their experiences and celebrate the beauty of nourishing their children in the best ways they've seen fit. There is nothing wrong with black mothers rallying around each other to do the same this week. We need to give our experiences, challenges and misconceptions voice, depth and nuance, if no one else will.