Yes, the president isn't always the best negotiator. But in this case? He's playing his hand just the right way 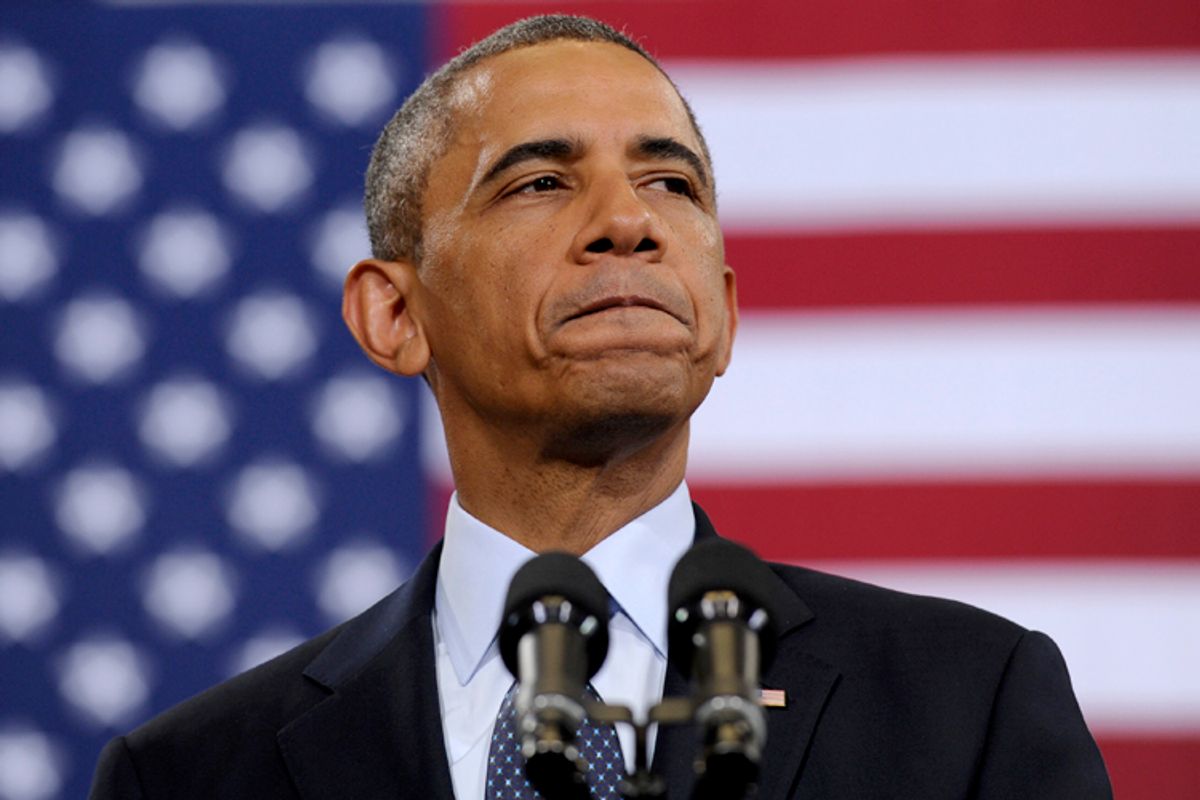 If President Obama had real leverage in the coming budget fights, as he did back in December during negotiations to address the fiscal cliff, you'd expect him to be out there making fresh demands. Close some tax loopholes, maybe, or turn off sequestration.

The New Republic's Noam Scheiber thinks this is wrong. He argues the White House is being dangerously timid as these deadlines approach. Instead of insisting each deadline be met as quickly as possible, he should cease all sidecar negotiations with the GOP over everything until they release the debt limit hostage.

This strategy is basically pins Boehner against the wall. The debt ceiling doesn’t need to be raised until mid-October at the earliest, and more likely late October or early November. But unless Obama and the GOP agree on a way to fund the government by September 30th, there will be a shut down, a scenario that pretty much everyone agrees would be much more damaging to Republicans. So if Obama insists on raising the debt ceiling as a precondition to avoiding a shutdown, the GOP will face a brutal choice: Either comply and raise the ceiling, taking the issue off the table and allowing Obama to focus entirely on funding the government (thereby giving him even more leverage in that debate). Or the GOP can refuse to raise the debt ceiling, shut down the government after September 30th, and endure the political hell-to-pay for this foolish move. And, of course, the price of being rescued from this quagmire-of-its-own-devising will be raising the debt ceiling, meaning there’s no way the debt-ceiling doesn’t get raised before we move onto the government funding debate.

I confess that raising the debt limit is different than closing tax loopholes or rescinding sequestration. But there's a common thread to all three things: they're all demands the GOP can easily laugh off right now. Just because the GOP lacks leverage in these fights, doesn't mean Obama has any. That's in the nature of ticking time bomb-style deadlines. If the two people locked in the room together are both required to defuse the bomb, neither can successfully place preconditions on their willingness to help.

Noam tiptoes up to the problem when he writes, "if Obama insists on raising the debt ceiling as a precondition to avoiding a shutdown ..." Who's making demands now? Indeed, Noam's identified the only way I can think of for Obama to yank the burden of blame for a government shutdown from the GOP and drape it over his own shoulders.

Procedurally, here's how I imagine this would play out: Obama would insist Republicans increase the debt limit in a continuing resolution (or, CR) to keep the government funded. House Speaker John Boehner, convinced God was listening when he recited the Serenity Prayer late last year, would smirk, and introduce clean legislation to avoid the government shutdown. Normally he'd need Nancy Pelosi to help him get a reasonable bill like that through the House, and maybe Democratic votes would be there. But let's say Pelosi was on board with Obama's demand, and whipped in her famously effective way against the legislation. Then and only then do I imagine Republicans would stop fighting each other and come together for the good of the team. A clean appropriations resolution would pass the House with 218 or more GOP votes, and House Republicans would leave town.

Enter Harry Reid. He might try to amend the House CR to include a debt ceiling increase. But I doubt he could get 50 votes for it. Would in-cycle Democrats vote for it? Sen. Mary Landrieu, D-La.? Sen. Mark Pryor, D-Ark.? I could go on. As much as the public hates gridlock and dangerous brinkmanship, raising the debt limit isn't exactly popular. Even if Reid could hold his majority together for that bill, though, Republicans would filibuster it. Now it's late September, a day or two before the government shuts down, and there's one vehicle at hand to keep things running. More to the point, it's completely clean. None of the usual GOP poison pills. No new spending cuts. No Keystone pipeline, no defund Obamacare. Just "keep operating government agencies at existing levels." For the first time since 1995, Republicans would have their hands clean in a government shutdown fight, and the press would be on their side. Appropriations and the debt limit are different things, they'd argue, and Congress will address the debt limit when the time comes.

Obama would have to cave. He'd have embarrassed himself, and fueled the common perception in the Republican conference that he's a paper tiger. Suddenly, rank and file Republicans would be united, GOP leadership's appetite for a debt limit fight would increase, and the White House would have turned a couple of easy victories over a hopelessly fractured opposition party into the exact opposite.

The administration learned its debt limit lesson in 2011 and proved it earlier this year. They're making the same play all over again, and that's the right move. Noam's concerned the White House's back-channel negotiations with a dozen or so rank-and-file Senate Republicans over how to replace sequestration creates the risk that he'll agree to something bad if the debt limit hasn't been increased by mid-October. But that's a completely distinct negotiation. Most likely those discussions will go nowhere. If somehow the group reaches an agreement in the next month or so, the Senate can try to force that deal on the House in the hope of ending budget brinkmanship for the foreseeable future.