"The Real World" for geeks

The network that brought you "Sharknado" tries to find its way in a crowded cosmos. One step: Reality programming 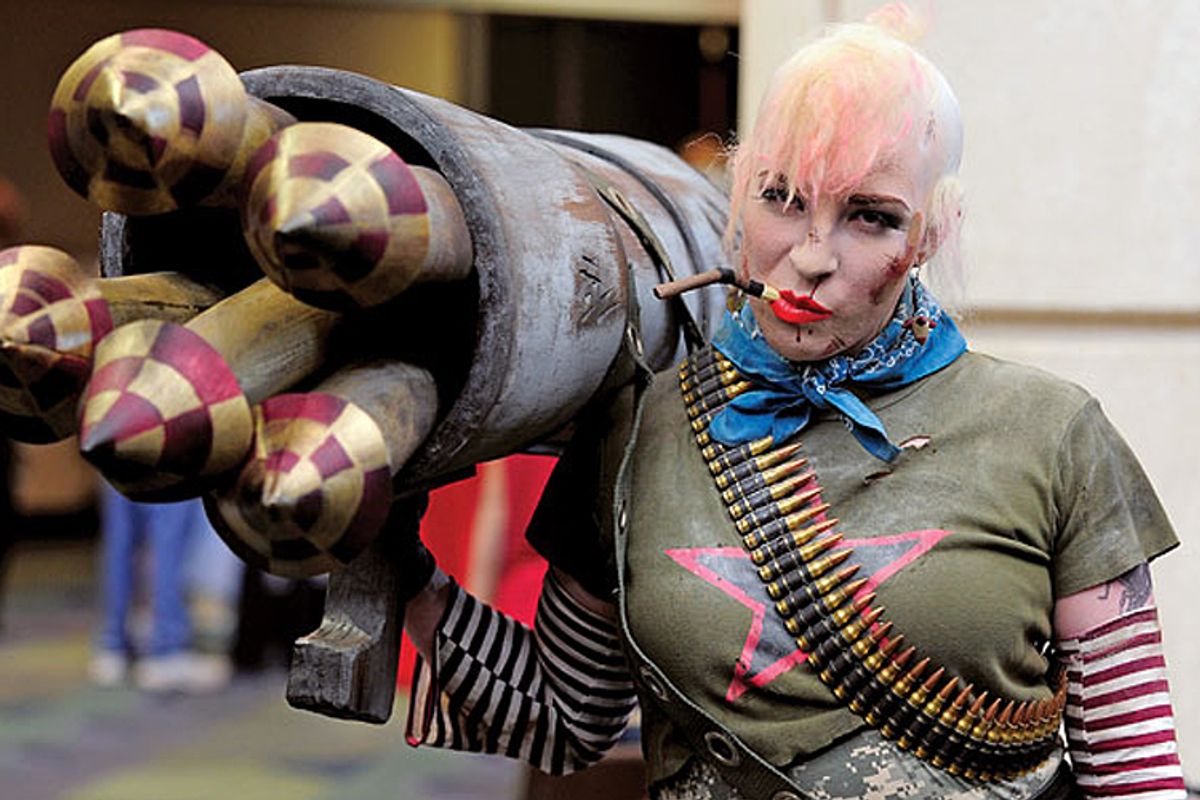 Had someone told me when I was 14 that there would be an entire television station devoted to science fiction, I would have gleefully spent the next five years stockpiling videotapes in anticipation -- that is, provided you could have torn me away from Autobots and “Dr. Who” reruns long enough to get me to heed prophecy. From “The Time Machine” to “Star Wars” to “Knight Rider,” sci-fi has always held down a significant corner of pop culture. But back when I was reading Alan Dean Foster and puzzling over Activision’s “Neuromancer” video game, nerdism had not yet reached the critical mass it has in the past decade. Now, Comic-Con is hotter than the VMAs, basketball players dress like Urkel, and the people who brought you the ultra-hip series "Mad Men" are greenlighting shows about dudes who can code.

Wikipedia tells me that the Sci-Fi Channel (now Syfy) predates this sea change, having begun broadcasting in 1994: “The concept was picked up by USA Networks, then a joint venture between Paramount Pictures and Universal Studios. The channel was seen as a natural fit with classic film and television series that both studios had in their vaults, including Universal's Dracula, Frankenstein, and the Rod Serling TV series Night Gallery, and Paramount's Star Trek.” In other words, while its namesake was still seen only as a niche, the Sci-Fi Channel would remain a genre graveyard. The notion of a glorious, geek-themed network teeming with well-regarded, unabashedly off-world original content would have to wait until the terrestrial public caught up.

And now that we’re here? Now that millions of us have demonstrated a willingness to tune in for “The Event,” “Flashforward,” “The Last Resort,” “Terra Nova” and whatever else sci-fi show promises to be the next “Lost”? Has the Sci-Fi Channel finally come into its own? Well ...

It would be inaccurate to say that Syfy (rebranded for numerous reasons including the desire to appeal to a wider audience) hasn’t shared in the geeking of America. The network’s “Battlestar Galactica” remake was a phenomenal, highly acclaimed surprise hit that gained a die-hard following among critics and soap opera fans alike. But in the wake of that stellar success, the channel has struggled to escape orbit with any of its other scripted offerings. Syfy originals like “Haven” and “Alphas” (now canceled) adhere to the channel’s initial honorable designation as a home for decidedly science fiction fare. But with genre all the rage, its shows are mostly eclipsed by better-funded, higher-profile offerings from other outlets -- think “Heroes,” “Walking Dead,” “Persons of Interest,” even “Once Upon a Time.” Competition will only get more fierce this fall with networks debuting several sci-fi and fantasy shows in the coming weeks.

Syfy hasn’t yet given up the spaceship. It continues to announce new scripted originals such as “Helix” and a revamping of “12 Monkeys.” Unfortunately, to the average American viewer, Syfy is not best known for “Defiance,” a well-reviewed series about aliens on earth that gets decent ratings and boasts a groundbreaking synthesis with online gaming. No, the Syfy network is, at this point, best known for “Sharknado.”

And this is where Syfy’s current brand identity may come across to some as so very baffling. The network appears torn between presenting itself as a hub for watchable sci-fi and a kitsch-factory devoted to cringe-inducing special effects and reviving (irreparably destroying?) the careers of former teen stars with steamers like “Sharktopus”; “Tasmanian Devils” featuring “The Wonder Years’” Danica McKellar; and “Mega Python Vs. Gatoroid,” starring '80s pop singers Debbie Gibson and Tiffany. Syfy also includes wrestling in its lineup. Despite its commonalities with some genre fiction -- spandex costumes, a specious interpretation of the laws of physics -- “WWE Smackdown” doesn’t make sense to me as part of the network’s programming purview.

The campy monster movies, however, I think I understand. At a time when science fiction is anyone’s game, Syfy is, perhaps, positioning itself not just as another content generator but as a commentator on the genre. Airing “Sharktopus” and “Mega Python” pokes fun at the fringe, heavily ridiculed space that science fiction once occupied in the public consciousness and recognizes the existence of those of us who will still, unapologetically, watch a movie for lasers, monsters and faded teen stars. Is this theory a stretch? Yes, but let’s not forget these are the same network geniuses who aired “Mystery Science Theater 3000” for its last three seasons. They may be late, but they know some things.

Hence Syfy’s Tuesday night lineup of reality programming: For four seasons, “Face Off” has shone plenty of much-deserved light upon a lot of extremely creative professionals. Despite their questionable haircuts and various obsessions from comic books to first-person shooters, the contestants on “Face Off” are some of the hardest working, most talented people on television today. The show presents these upstarts with a real opportunity to turn their weirdo preoccupations financially viable, and so serves as a metaphor for the mainstreaming of science fiction.

“Heroes of Cosplay” follows more not-so-everyday folk who design costumes based on their favorite sci-fi and fantasy characters and compete in competitions around the country. Entertainment Weekly’s Jeff Jensen called it “'Toddlers & Tiaras' for the Comic-Con generation” and, yes, the show does employ some of the more irritating tactics of today’s reality television. The competitors’ comments and interactions in confessional, in particular, often feel staged. The show, which aired its third episode last night,  suffers overall from a tangible engineered quality.

From the opening credits on, the most glaringly obvious, if not problematic, thing about “Heroes of Cosplay” is that its cast is almost entirely female. Heroines in scant outfits are the norm in comics and games and thus in real life cosplay. Cleavage is as much a recognizable accessory of many beloved characters as a sword, helm or blaster. “Heroes,” at first, appears to give in to that conceit without contest. During last night’s episode, cosplay supertstar Yaya Han had her entire body digitally scanned in preparation for her own line of collectible figures. Running a camera over Han’s full bosom and transferring the image to a nearby monitor, the designer explained, “The green feedback is showing me that we’re actually receiving all of her volume.”  Han seemed happy with the prominence of her breasts, but requested that her legs be made longer.

“Heroes of Cosplay” might be merely exploitative were it not for the fact that some of the subjects refuse to participate in the tech T-shirt contest aspect of cosplay. And some of the ones who do are, at least, self-aware. Prepping her Betty Page-as-the-“Rocketeer”-themed costume for a convention in Orlando, Riki voiced her optimism about doing well in competition: “I’d be surprised if I don’t place with the Rocketeer. It’s got props and I don’t wear any pants with it ...” Like Syfy, Riki knows her audience.