Yes, the president's speech was political -- and for good reason 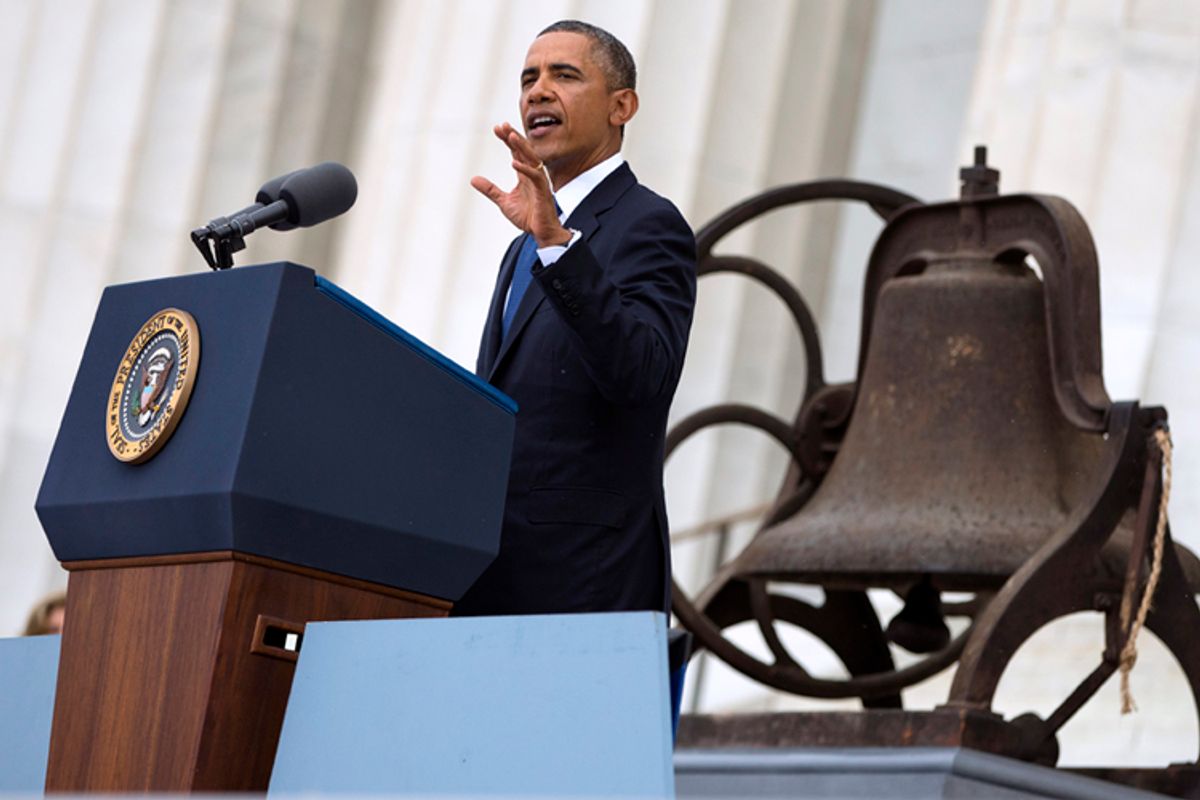 President Barack Obama speaks at a ceremony commemorating the 50th anniversary of the March on Washington, Aug. 28, 2013. (AP/Evan Vucci)
--

If you listened to President Obama's commemoration of the 50th anniversary of Martin Luther King's speech at the March on Washington, and heard a mere paean to the civil rights movement, you weren't paying enough attention.

At its core, Obama's speech was a reminder -- almost a warning -- to minorities and equality advocates not to lose sight of the fact that politics is central to advancing the causes of the progressive movement King helped unleash.

When Obama's opponents lambaste him for politicizing the anniversary of the march, as they already are, they're not basing their criticisms on anything illusory -- they're hoping to diminish its impact.

That's because Obama beseeched his politically detached supporters to remember that the things they want to see happen in the country won't happen if they stay that way.

"To secure the gains that this country has made requires constant vigilance, not complacency," Obama said. "Whether by challenging those who erect new barriers to the vote or ensuring that the scales of justice work equally for all and the criminal justice system is not simply a pipeline from underfunded schools to overcrowded jails, it requires vigilance."

Obama identified villains in the struggle for civil rights and economic security, but juxtaposed their well-heeled efforts and ideas with the easily caricatured goals of a disorganized political left:

Our politics has suffered. Entrenched interests -- those who benefit from an unjust status quo -- resisted any government efforts to give working families a fair deal, marshaling an army of lobbies and opinion makers to argue that minimum wage increases, or stronger labor laws, or taxes on the wealthy who can afford it just to fund crumbling schools -- that all these things violated sound economic principles. We'd be told that growing inequality was the price for a growing economy -- the measure of the free market. That greed was good, and compassion ineffective. And those without jobs or health care had only themselves to blame. That government was somehow itself to blame for their own growing economic insecurity. that distant bureaucrats were taking their hard-earned dollars to benefit the welfare-cheat or illegal immigrant.

That gave way to the portion of Obama's speech that will rankle many progressives: a few sentences of finger wagging -- at rioters and opportunists who used social injustice as an excuse to engage in criminal activity -- that in a symbolic way validates white conservative efforts to stereotype and thus undermine public concern for entire minority communities.

But it was simultaneously a reminder that political salience is fragile, that public perception matters tremendously and that reining in these temptations is actually key to the viability of progressive policy.

"What had once been a call for equality of opportunity -- the chance for all Americans to work hard and get ahead -- was too often framed as a desire for government support, as if we had no agency in our own liberation."

I don't feel particularly qualified to judge the fairness or efficacy of Obama's remarks in this particular section, but there's more going on here than scolding minorities or empathizing with white Americans. It's a reminder that the people fighting support programs frame them as policies that sap ambition, and that anyone who wants to protect those programs plays into their hands by taking them for granted.

It harkened back to one of the most memorable lines in Obama's second inaugural address, which may as well have been delivered as a telegram to Rep. Paul Ryan, R-Wis.

"We recognize that no matter how responsibly we live our lives, any one of us, at any time, may face a job loss, or a sudden illness, or a home swept away in a terrible storm," Obama said. "The commitments we make to each other — through Medicare, and Medicaid, and Social Security — these things do not sap our initiative; they strengthen us. They do not make us a nation of takers; they free us to take the risks that make this country great."

That's a pretty good message! And to a great extent his whole speech was a reminder that government programs like these -- including his own healthcare law, which he also reference -- remain under attack, and protecting them is an inherently political calling.