Cities will kill us all!

Cities might be in vogue these days, but when the apocalypse comes, they'll be the worst place to hide 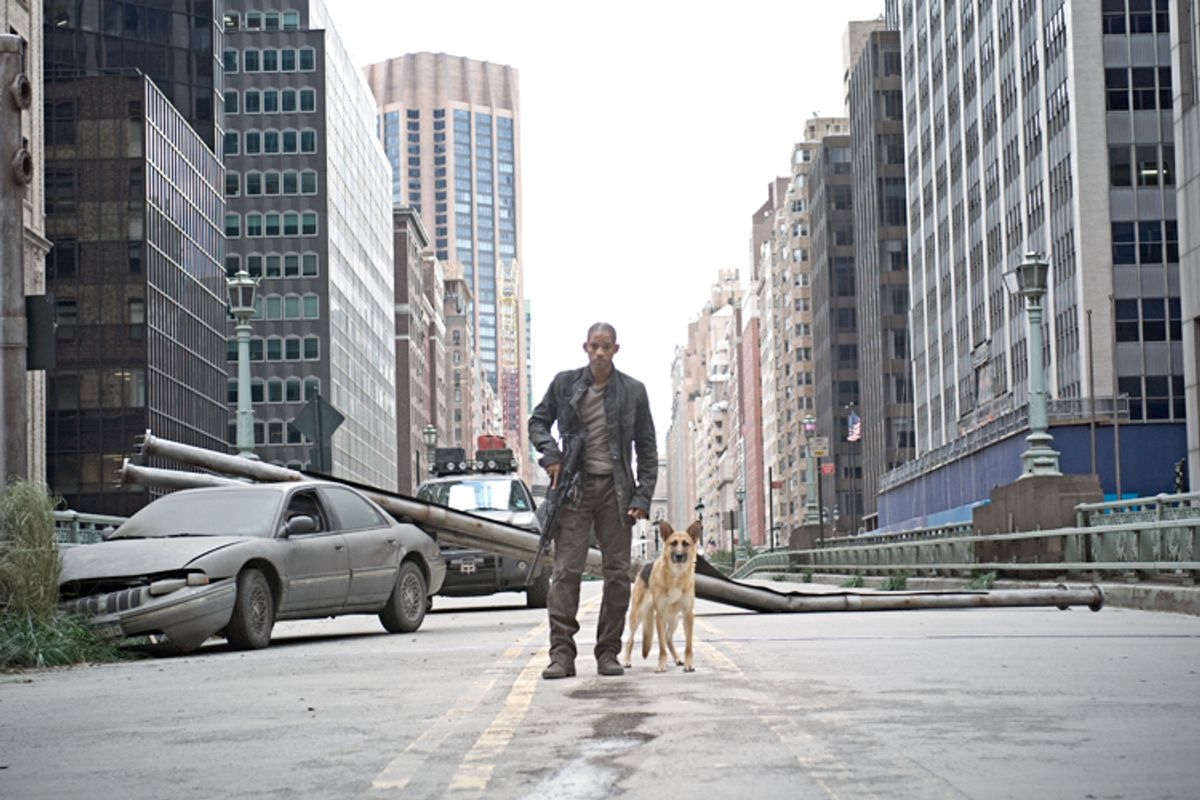 WIll Smith in "I Am Legend" (Warner Bros. Pictures)
--

In case you hadn’t heard, cities these days are all the rage. While once upon a time the rich fled urban centers and their accompanying crowding, pollution and grime, according to Leigh Gallagher’s upcoming account in "The End of the Suburbs," “cities are experiencing a renaissance.” According to Henry Grabar, a city is a “harbor of tolerance and assimilation, a hub of scientific innovation and economy growth, a tourist attraction, a center for the arts, a ticket to upward mobility, a key to saving the environment.”  With urban agriculture on the rise, we can even grow our own food.  Thanks to technology, city dwellers can give away their leftovers or get laid with nothing more than a digital photo and a swipe of a finger.

But there’s one little problem that the powers that be conveniently ignore when talking up the benefits of a metropolitan life.  Cities are going to be the worst place to ride out the end of the world.  Whatever the underlying cause of our doom, urban centers, with their dense populations, high crime and corruption rates, lack of natural resources, and proximity to water, are going to fall first.

As any good prepper – or conspiracy theorist – knows, there are a number of potential triggers to the end of the world as we know it.  Considering human history, not to mention the current state of the world, the possibility of a World War III doesn’t sound so outlandish. Climate change models are getting increasingly pessimistic – and panicked – trying ever harder to warn us that the end is nigh.  But my money is on contagious disease, though I don’t rule out zombies, an alien attack or some good old-fashioned Bible-style fire and brimstone.  Ultimately, though, it doesn’t matter what causes the apocalypse. What matters is whether you survive it.  And if you’re in a city, chances are, you won’t.

While battles may have once played out on open fields between trained soldiers, warfare has changed significantly in the last hundred years, turning cities and their citizens into common targets. A supernatural conflict would probably unfold similarly.  The aliens in "Independence Day" knew what they were doing: Taking out D.C., New York, and L.A. threw the whole country – not just those isolated locations – into total alarm and disarray.  The site of the first major – and failed – American-led armed resistance to the zombies in Max Brooks’ "World War Z" wasn’t the middle of nowhere; it was Yonkers.

Yet as wild weather events become increasingly common, climate change is moving up the list of likely causes of the apocalypse.  Although no place is safe from its impacts, cities, especially those on the coasts, are more precariously situated than their suburban and rural counterparts.  Post-Hurricane Sandy New York was probably one of the first cities to find itself underwater, not one of the last.  But not all cities will see rising sea levels and increased flooding; others will just be left with erosion, drought  and “saltwater intrusion.”  (New York and Los Angeles can count on all of the above.)

But apocalypse-level war and climate change would most likely take years to unfold, giving humankind the chance, hopefully, to learn some lessons and put some safeguards in place before all is lost.  Contagious disease, on the other hand, might not give us that opportunity.  The population density of a city makes it the perfect petri dish for a viral, bacterial or zombie pandemic on a scale that could significantly cut the ranks of people left on the planet.  It was a swine flu variant that decimated the world’s population in "Contagion," a “genetically engineered viral cataclysm” that wiped out all but one member of the human race in Margaret Atwood’s "Oryx and Crake," and let's not forget the estimated 75 million to 200 million people killed by the medieval Black Death.  Zombie-ism and its ilk fall in the communicable disease category too, and with such a short incubation period and people living in such close proximity, it shouldn’t come as a surprise that cities will become hives of infestation (see, for example, "I Am Legend," "The Walking Dead" or Justin Cronin’s "The Passage").

And if God is behind the end of the world, as has been predicted so many times before? Good luck. The first apocalypse on the books was of Sodom and Gomorrah, entire cities destroyed after a group of men tried to rape Lot’s male houseguests. (Lot offers his virgin daughters instead, securing his safe escape.)  In a Judgment Day scenario, as Seth Rogen and Co. taught us this summer in "This Is the End," there is no better place to find greedy, hubristic, selfish sinners than Los Angeles.

Mayan gods don’t spare cities either.  Even if they aren’t targeted specifically, high rises and other artificial structures make them especially dangerous ground to be standing on when it opens up beneath you.  (This, for me, was the main takeaway from "2012.")

Not only, though, will the hammer of the apocalypse fall hardest on cities, for those who do make it through the first stroke, urban survivors will face a specific set of challenges compounded by city life.  To start, with the limited storage space that comes along with living in a cramped city apartment, chances are that city dwellers will be ill prepared to ride out a Doomsday scenario with only the contents of their cabinets.  This was the undoing of the New York City fireman featured on "Doomsday Preppers," who couldn’t sufficiently load up on necessities like food and water or barter-ready goods like liquor and tobacco.  Although urban gardens can provide sustainable sustenance for families and communities in peacetimes, anything open to the public is going to be up for grabs in the apocalypse.

Which brings us to another problem: protection.  Though in all other scenarios I am grateful to live in a city with strict gun control laws, at the end of the world, I sincerely hope to have a gun owner on my side.  Shit is going to get crazy.  Riots and crime will plague the streets (see "Seeking a Friend for the End of the World"); zombies will withstand anything that doesn’t destroy their brains; and if you don’t have it in you to kill someone else, the fear of cannibalism might drive you to kill yourself instead (Cormac McCarthy’s "The Road").

Getting around or out of the city is not going to be easy either.  Whether it’s the diseased, rising waters, crumbling buildings or the walking dead, the streets will be full of unpredictable dangers.  If you don’t know your way around unexpected obstacles, you could end up trapped like the embattled salvation-seeking squad in Las Vegas in "The Passage," "The Walking Dead’s" Sheriff Rick in Atlanta, or "Shaun of the Dead's" pub-bound antihero.  If you don’t find a way out early, disaster containment efforts  might mean you never will.  (How Will Smith finally escapes Manhattan in "I Am Legend," after all the bridges and tunnels have been destroyed, is a question I still grapple with today.)  My advice to fellow city slickers: Keep your bug-out bag ready so you can run at Doomsday’s first sign.