A wingnut for everyone! Every fringe group gets its Republican politician 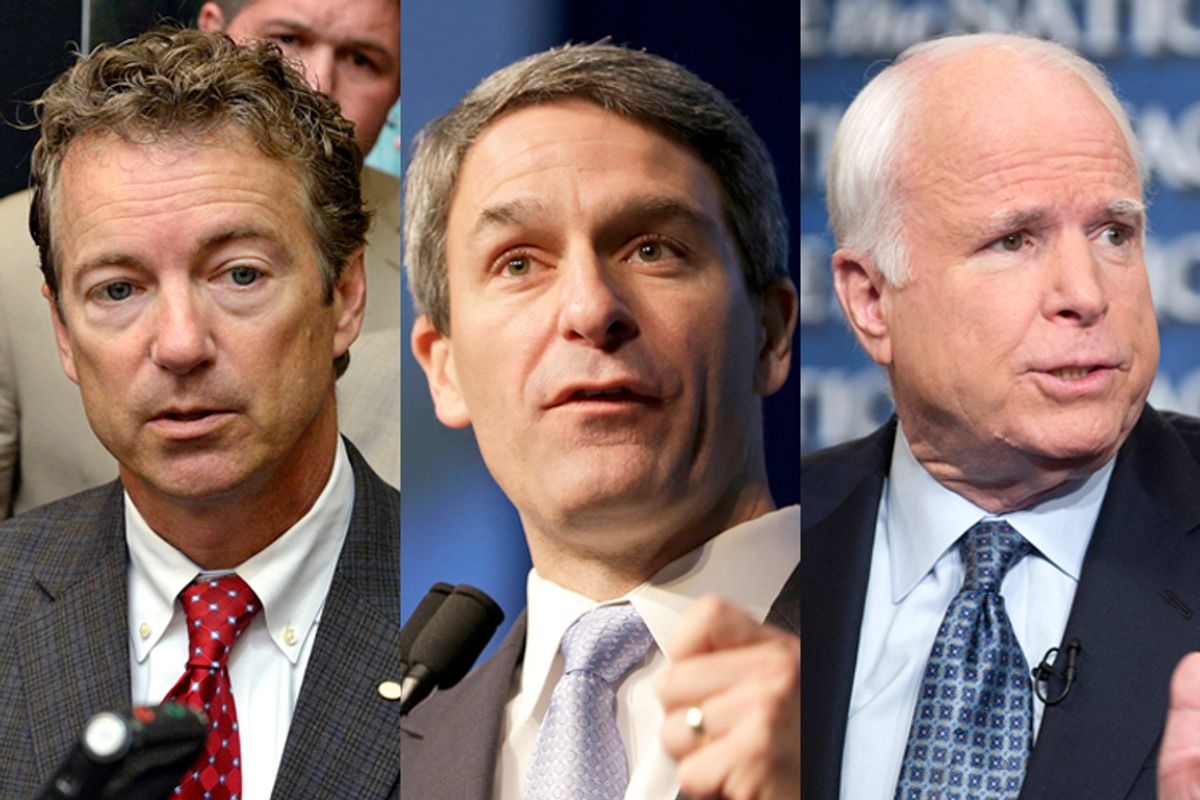 Virginia Attorney General Ken Cuccinelli is pretty much detested by women in Virginia -- Democrat Terry McAuliffe, who once left his crying wife and their infant child in a car so that he could make an appearance at a fundraiser, currently leads Cuccinelli among women by 12 points -- but he's got the support of some of the men who used to be married to some of those women, according to this Washington Post story. The "fathers' rights" movement, a small but vocal group of men fighting for deference in the divorce, child support and custody process, is firmly behind Cuccinelli. Cuccinelli has represented the former leader of a local group in a custody case, and when he was a legislator he supported the fathers' rights policy agenda.

Cuccinelli is not specifically, openly pro-fathers' rights (and to be clear, the No. 1 "fathers' rights" issue is wanting to pay less child support). His support for their agenda is honestly more about his opposition to legal divorce, something else he doesn't talk about much anymore.

“If you are sued for divorce in Virginia, there’s virtually nothing you can do to stop it,” Cuccinelli said in 2008 to the Family Foundation, a socially conservative Richmond-based advocacy group. “This law has everything to do with the breakdown of the family. The state says marriage is so unimportant that if you just separate for a few months, you can basically nullify the marriage. What we’re trying to do is essentially repeal no-fault divorce when there are children involved.”

As a state senator in 2005, Cuccinelli offered a bill that would have made it so parents initiating a no-fault divorce could have that action counted against them “when deciding custody and visitation.” The measure never came to a vote, but Cuccinelli won praise from Stephen Baskerville, then-president of the American Coalition for Fathers and Children, for fighting against the no-fault divorce “epidemic.”

On the one hand, banning no-fault divorce is a strange priority for a modern supposed conservative, committed rhetorically to lessening the intrusion of the state into private affairs. The notion that people ought to be able to associate (or disassociate) willingly without the interference of the government is supposed to be the core belief of these guys, I thought. But on the other hand, banning divorce does make more sense, as a policy priority, than preventing gay marriage, for people whose justification for anti-gay beliefs is a desire to make sure that the "traditional" link between marriage and child-rearing is maintained.

But whether or not Cuccinelli is personally pro-"fathers' rights," he has their support and has voted the way they like. He does not have a lot of company -- even psycho Florida Gov. Rick Scott has vetoed legislation supported by fathers' rights groups -- but they got Cuccinelli, and he might be the next governor of Virginia.

This is truly a golden age for conservative fringe groups. No matter how obscure -- or widely reviled -- your pet cause is, it's now easier than ever to find a Republican politician, often a fairly prominent one, willing to support it, or at least allow you to believe that he supports it. Republican politicians now aren't just responsive to the desires of the big interests, like oil and gas. Nowadays a pol on the make is willing to fight for almost any crazy cause.

The hardcore Shariah-fearing Islamophobes have their stalwart allies. The Austrian economists are made to feel welcome by major GOP figures. A party that can make room in its tent for the pro-dogfighting lobby has room for any white person with a crazy grievance. And if it weren't for the fact that most of what these people want is terrible, this would almost be admirable. Because on the other side, the Democrats barely ever listen to some of the biggest and most "mainstream" elements of their political coalition, like the labor movement and environmentalists. The Republicans indulge everyone, which surely makes being a crazy conservative feel much more satisfying. Unfortunately it also generally leads to horrible laws.